...And Papercuts Were Had By All | EVE Online

...And Papercuts Were Had By All

Hi all, this is CCP Anthelios along with CCP Soulblighter, CCP Booster, and CCP Space Cadet. We are all programmers working in the Atlanta office on the World of Darkness project. During recent planning we discovered that we had a unique opportunity. We had about 3 weeks of downtime before starting up our next project and were asked if we would like to help out with Crucible, the Winter 2011 EVE expansion. We (all being EVE players) accepted and were formed into Team Papercuts with one goal: Get as many cool features as possible into EVE in only 3 weeks. We decided to each work independently on as many small features as possible rather than trying to tackle something huge. The following is the account of our headfirst plunge into EVE…

As a UI Programmer my focus was on usability issues and general UI weirdness in EVE. One huge thing I tackled was the consistency of drag-and-drop functionality in the Market window. After the Winter Expansion, any icon you see in the market can be dragged to the quickbar or chat. You’ll also notice that all of the previewable items in the market can be clicked to generate a 3D preview just like in the info window. I gave some love to the quickbar as well so you can more easily add and organize items, as well as being able to drag those items to link in chat. The last market update was adding the ability to drag fittings into the quickbar (automatically creating subgroups) so you can more easily shop for the modules you need for a specific fit:

Next, I added the ability to drag-select items in inventory containers. REVOLUTIONARY right?! Gone are the days when you’d have to shift- or ctrl-click the items you wanted to select. Now just drag over the items you want much like your favorite operating system and voila!

Also, have you ever been flying along, and your camera randomly rotates to something random off in the distance?  You probably hovered over a target icon by accident.  That feature is gone now.  No more random auto-panning to targets.

Finally, with the assistance of CCP Booster, We made it so if you are piloting a ship with multiple kinds of bays, like ore, fuel, ship maintenance, and corp hangars, ALL of those windows will stay open when you dock and Undock.

So as part of Team Papercuts’ effort to make every EVE player’s life a little better, I was tasked with making it easier to retrieve goodies from wrecks or floating cans.  So, uhm, I made a button…. and uh, you can click it….and it LOOTS ALL THE THINGS!!!!  This has the exact same behavior as it would if you were to select all the contents of the container and drag them, but faster and easier.

Hey all. I’m CCP Soulblighter, and I’ve been working on a few fun little features you might be interested in.

First up is a convenience feature for Corp CEOs and Directors. Previously, you had to be in station in order to use the ‘Unrent Office’ button found on the Corp Hangar window. You will now find that you have the option to unrent offices remotely via a right click menu in the corporation details tab.

Next, cloaked ships will no longer count as occupying anomalies, signatures, incursions or other deadspace complexes allowing them to properly respawn. This fix was to address a “feature” of the deadspace complex system that allowed passive economic warfare by preventing the exploration sites in an enemy’s home systems from respawning by sitting in them cloaked all day.

Lastly, under the solar system map, you’ll find a new option on the Lines tab, which allows you to display Jump Bridges belonging to your alliance. “Alliance Jump Bridge Routes” will show up as sexy, animated, curved lines on the map. 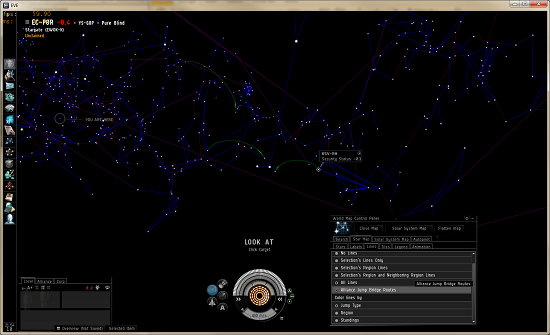 We also added an improved Jump command so that it behaved more like the Dock command. Currently, when you hit Dock, it will warp to or, approach the station you’re docking at, before finally docking to once you’re in the appropriate range. The same idea now applies to Jump, where you will Warp (or Approach) if you’re too far away to interact with the gate, and then jump through once you get there. The task asked for the same functionality for Acceleration Gates and Wormholes. Being a player myself, I instantly noticed the next logical step for a feature of this type… so I just kind of… did it. In addition to Dock, Jump, Activate Acceleration Gate, and Enter Wormhole you can also now request to Open Cargo, Scoop to Drone Bay, Scoop to Cargo Bay, Scoop to Ship Maintenance Bay and you’ll attempt to get to the correct range and do the action.

You’ll also find a couple of drone improvements on the way. Nothing is worse than warping off to find that you’ve forgotten your precious drones. Well, fret no more! You can now reconnect to lost or abandoned drones that have been left behind as long as you’re still in the ship that launched them. Right clicking on your ships right-click menu, you’ll now find a command to Reconnect to Lost Drones. Alternately, if you like keyboard shortcuts, you can map a key to this as well. In order to prevent this from being completely abused and used for evil, you’ll only be able to reconnect once a minute (this time is subject to change) and if you have more drones around than you have the ability to control at once, you get no say over which ones will come back under your control… so when you’re attempting to reconnect, make it count!

You’ll also find that when your ship is forced to make an emergency warp, your drones will attempt to return to the drone bay before you take off. Hopefully this can save you a few drones when your cat walks across the power strip.

And finally, one of my pet peeves for years now has been that missile launchers don’t show their range when you mouse over them when using the tactical overlay, so I’ve gone ahead and fixed that for you too. And while I was at it, I did some extra credit and made it so bomb launchers show the explosion radius centered where the bomb is going to land ~30km in front of your ship.

Hopefully some of these changes are things everybody can get excited about, because I’m totally stoked about them!

As a group we had a great time working on this stuff and we can’t wait for everyone to get their hands on it (though from the Test Server feedback we can see you are well on your way to enjoying it). This is just a taste of the things we did for you guys, check out the release notes for the full list. We all hope to be able to do something like this again in the not too distant future, both as developers and players.