Back to the Balancing Future

The tiericide locomotive is well on track so far. Retribution ship changes are already packed and ready to be delivered to your personal fireplace on December, the 4th.

With the bulk of our work out of the way though, this begs the question, what are we going to do now with all that precious free time? Eat marshmallows on the CCP office balcony? Impossible, it’s snowing outside. Break CCP Fozzie’s fingers with the Nerfbat™? Already done. Fondly trim CCP Unifex’s hairs while singing dirty French limericks? No can do, he is desperately and irrevocably bald.

Well, guess that leaves us no choice but to move forward with future balancing plan then. Let’s assume 2012 is not the end of the world, the universe and all things we hold dear, and let’s take a peek into what we want to start tweaking next year.

Yes comrades, battlecruisers are indeed next to get through the tiericide revolution. Let’s face it, they had it coming, as current tier 2 variations perform too well while tier1s are found wanting. With this in mind, the plan is to adjust total slot layout to 17 on all of them and split them into two categories depending on their expected role.

First, the attack version; they favor speed and damage over resilience, which fits the current tier 3 battlecruisers extremely well.

Second, the combat flavor, which follows in the footsteps of the frigate and cruiser variants – made for front line duty, they have a good balance of firepower and resilience.

That’s the big lines for battlecruisers. As usual, your voice will be heard through feedback threads posted on the proper forum sub-section when the time is right. It is also worth noting that we will adjust ship mineral requirements as we continue with the rebalancing.

You sunk my battleship

Next on the ship rebalancing queue, battleships suffer the least from the current “tier” system, and most of them are fairly well balanced. However, some still require a little face lift, since we are one year into the future and we have the technology.

As usual, we would like to keep up with the ship line classification we have been using for frigate, destroyer and cruisers so far. This is not designed to arbitrarily pigeon-hole vessels into narrow roles, but to provide a basic line of operation for anyone to understand and follow through. The ship role and purpose on the battlefield will still greatly be influenced by the choice of modules, rigs and ammunitions you make.

First, let’s have a look at the disruption line, which only has one ship so far:

Then, we have attack battleships, where most of the changes will be:

And finally, combat vessels. They share the same functions as explained for battlecruisers above, so without further delay:

Again, mineral requirements are most likely to be tweaked as we go through the balancing process. Below you can see how all tech1 ships come together with the new tiericide overhaul.

I love it when a plan comes together

As announced at the beginning of the year, skill requirements will be modified when we are done overhauling tech1 battlecruisers and battleships. This consists of:

We are doing this for two reasons:

With this in mind, it becomes quite obvious to focus on training the Destroyers and Battlecruisers skills before the change to get the maximum return effect. We highly recommend you start doing so now.

Our goal is to make them appealing to fly as a whole, not something you keep inside a POS forcefield while watching your favorite TV show. For this reason, we want:

What does that mean in practice? We are removing the distinction between “fleet” and “field” Command Ships. All of them will now have 3% bonuses to two Warfare Link fields and be able to fit three warfare link modules simultaneously (instead of 3 for fleet versions only). That also means that the previous fleet Command Ships will be rebalanced to fit combat roles. Want to use an Eos as a truly effective drone ship? You can. Or the Damnation as a sexy Khanid missile platform beast? Be our guest. All that matters is the specialization choices you make before undocking by deciding to fit gang links or not, not something forced to you from the arbitrary "field" versus "fleet" hull.

Tech 3 treatment will focus on making them more generalized. Their Warfare Link bonuses will be reduced from 5% to 2% effectiveness; however they will have bonuses to three racial Warfare Link fields while being able to fit three Warfare Link modules simultaneously.

As a side note, as we announced a while ago, we are not pleased by having Warfare Links work outside the battlefield zone, and will be investigating options to move them on grid. Command and Tech3 ships providing that much of an advantage should commit to an engagement instead of being safely parked inside a POS bubble.

Here is a picture summarizing the text below as a tl;dr version: 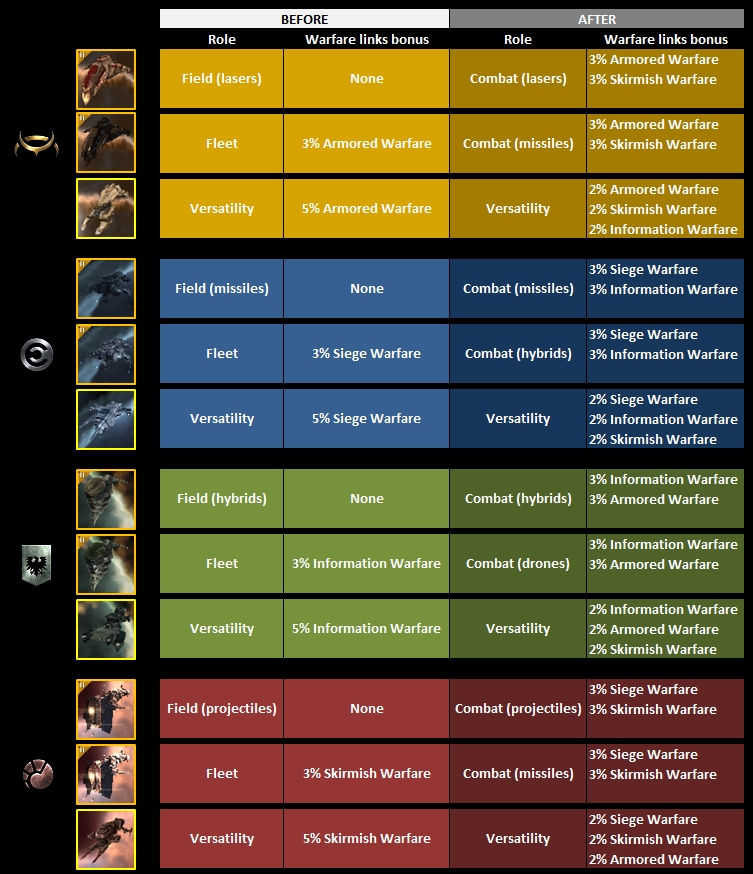 Well that’s pretty much it for now, remember this is just a vision for the beginning of 2013 and as such, not final. We have more balancing changes to be planned and released, so keep your eyes peeled for updates.

Hope that helped and many thanks for your time!