So recently we've been working on a compact feature called Certificates. This blog is going to make a spirited attempt at explaining the why, the what and the how of said feature with the goal of disseminating information and soliciting feedback. Hurrah.

After finishing writing this I realize there's actually quite a few words here. If you don't want to read the whole thing, I recommend scrolling down, looking at the pretty picture and reading the tl;dr at the bottom :)

The concept, and the reasoning behind it, was related to me a couple of months ago by t0nyG, who in turn had heard it from Hammer, and my immediate response was "why haven't we done this already?". The "problem" it seeks to address is one of EVE's strengths, namely the depth and complexity of the skill system. For most veteran pilots it's a familiar and comfortable collection which allows them to customize and specialize their character(s). However, for many newer players it's a Byzantine labyrinth of requirements, dependencies, unexpected dead-ends and skills which appear superfluous but are, in actual fact, crucial.

In short, while "overwhelming" can be good in moderation, it can be taken too far, and the presentation of the skill system is one place where there's room to scale it back a little. (Without, of course, dumbing down the system itself, as it's doing several other jobs extremely successfully).

And so Certificates were made the centerpiece of the last couple of sprints for the New Player Experience group, which is working hard to smooth off the hard corners of the first few weeks of gameplay. The objective of this continuously-iterating group is not to remove the challenges from the gameplay itself, but rather to ensure that players aren't being held back from addressing those challenges by other things. In this case, an inability to clearly see where a particular skill fits into the greater scheme of things, what it enables, how to get there and where to go next.

And while it's an NPE project, and thus running parallel to development efforts for more experienced players, there's no reason for it not to be useful to the wider playerbase. Ever had problems evaluating a potential corp applicant's skillset? Got caught out by training Interdictors but forgetting Propulsion Jamming V? Wondering just what the hell to train next on your 80 million SP character? Or just want to wave your Gunnery e-peen around? Read on!

Ok, so that's probably channeled your confusion in the right direction, and you may well want to know now what it actually IS. So, here it is in a single sentence: certificates are defined groups of skills and certificates. There, wasn't that easy?

It is, of course, slightly more complex than that. Certificates are divided by category, class and grade. So, for example, take "Armor Tanking - Standard". This falls under the category "Defense", the class "Armor Tanking" and the grade "Standard". To try and capture the basics of the skill system, our current iteration has about a dozen categories and around a hundred classes, subject to further consideration.

Each certificate has a list of defined prerequisites, which can include skills to a certain level and/or certificates of a certain class and grade. Armor Tanking - Standard requires:

This ends up giving you access to a nice spread of armor tanking gear. It also has some description text to explain what the certificate is, what you get by qualifying for it and a few suggestions about what you might do once you get it. The text for Armor Tanking - Standard reads as follows:

This certificate represents a standard level of competence in armor-based defence. It certifies that the holder is able to use Tech 1 Armor Plates and Armor Hardeners, and all Armor Repairers and Damage Control Units. With this certificate you can rely on armor-related systems to provide a sturdy defensive barrier.

On top of this, each ship can now have a list of "recommended certificates" associated with it. These are very strictly recommendations, and meeting or failing to meet the recommended levels has absolutely no impact on flying the ship in and of itself - you can safely ignore the entire thing and it won't make the slightest bit of difference.

Finally, individual certificates can be switched between "Private and "Public", allowing other players to see those certificates in your "show info" window.

A few things that certificates don't do, just to clear up a few possible misconceptions:

Ok, that's an overview of the functionality. Now, to specifics of implementation. Feel free to skip some or all of this section if you don't want all the gory details!

Certificates are accessed primarily through the character sheet. There's a new section beneath "skills" called "certificates" that lists your certificates, as well as letting you set permissions and other settings. You'll only see the highest grade of each class, so "Armor Tanking - Basic" is replaced with the "- Standard" version, as you'd expect. Permissions lets you set whether each individual certificate is public or private with a nice little radio-button list, as well as having the option to set all certs public or private. Changes aren't saved until you click "save", so any mistakes can be rectified without doing any harm.

Each certificate exists as an item that you can "show info" on, opening the usual window. In here you can see various interesting things, including description, required skills and certs, and what ships (if any) it's recommended for. Speaking of "show info", ship info now lists what certificates are recommended, and character info now shows any certs you've set as public.

In the main certificate listing, you'll also find a button marked "Open Certificate Planner". This is a button well worth clicking, as it takes you to a screen which looks a wee bit like this: 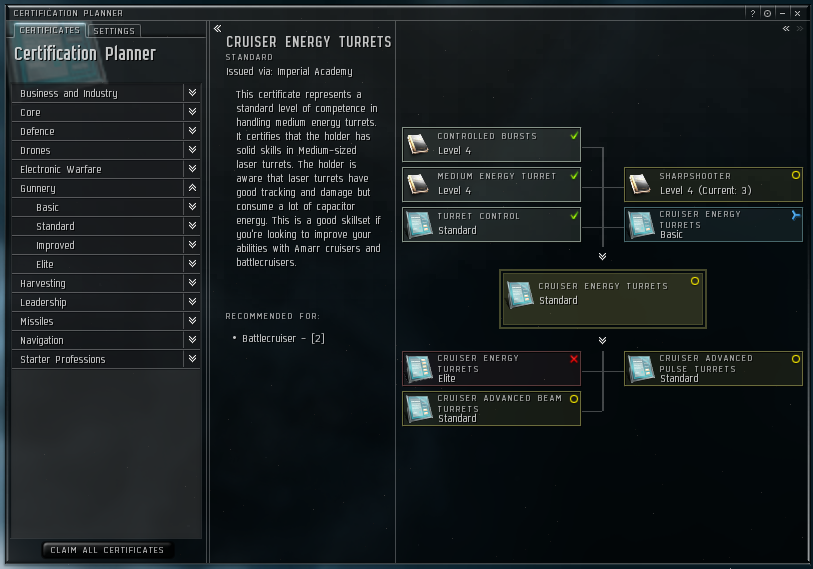 On the left, your certs listing, sorted by category, grade and class, so you can look at all the Basic-grade Defence certs, or the Elite-grade Gunnery certs or whatever. Also in there, the "settings" tab, which lets you set group-toggle mode and which certs are displayed - pretty similar to the skills settings tab you're probably already familiar with. At the bottom, you'll note the "claim all certificates" button, which lets you just grab everything you qualify for at once if you're not interested in checking them out individually.

Next bit over is the name of the currently selected certificate, giving you name, issuing corp, text and recommended ships. You'll see there that it just says "Battlecruisers 2" - mousing over that line will bring up a tooltip letting you know that the BCs in quesion are (obviously) the Prophecy and Harbinger. Clicking the "Recommended for:" text will open the info of the certificate, showing you a complete list of the relevant ships. The double arrow next to the name lets you hide and unhide this section of the interface at will.

Finally, the "tree view", which took some legwork to get working but which we think was well worth the effort. Most of it's reasonably self-explanatory, as it uses existing color schemes and icons and should (hopefully!) be pretty intuitive. Middle box is the current certificate, top half are requirements, bottom half are certs requiring this certificate.

The blue box and icon represent a certificate for which you meet all the prerequisites but haven't actually claimed. If you went to that certificate in the tree view, the centre box would of course be blue, and there'd be a button marked "claim" which you could click to claim that certificate. Green boxes (very lightly shaded, but there is some green in there) and ticks are things you have, yellow means you're working towards that thing (have met at least one prerequisite for certs), and red means you haven't started (no prerequisites for certs).

Right-clicking any box will bring up options - "show info" in all cases, "view market details" for all skills, "train skill" for any skills you haven't already trained to 5, and "claim certificate" for blue certificates.

Any certificate box can also be clicked on to take you to that certificate in the tree view. This lets you navigate around the tree in a pretty straightforward way, by clicking on anything you're interested in. If you get lost or forget what you were looking at, the arrows in the top right corner take you forward and back through previous selections.

Finally, any of the boxes can be dragged to chat, which will create a link that opens "show info" for skills, and takes you directly to the certificate in the tree view for certificates.

Whew. I think that's all the current functionality laid out.

Our "first run" of certificates break down into three general groups, all of which share certain common features. Firstly, we're just sticking to sub-capital ships and skills for now - by the time you get into a dreadnaught or freighter, you probably have a good handle on the skill system. Second, we're never using the full spread of five grades for any class - the "Advanced" grade is being kept in reserve for special situations, and in many cases "Improved" and occasionally "Basic" are also left out to keep the total number down.

A typical progression therefore might be Basic, Standard, Elite. Basic is intended to capture the very basics of a certain area, so you might just be able to use most armor repairers and a few related bits of equipment. Standard is a good baseline for an established player, while Improved reflects a good amount of specialization. Elite certificates almost always represent a maximized skillset, so there's literally nothing that can be improved, and the prerequisites on these are usually pretty punishing. Qualifying for an Elite-grade battleship gunnery certificate is not an easy task!

Of the three groups of certs, the first are general-purpose certificates. These cover things like gunnery, tanking, leadership and so on, and attempt to capture the basic progression through that particular specialist area.

The second group are specialist certs, which cover things like jump portal generators, interdiction launchers and the like. These exist mainly to flag up to players where specific skills or modules are desirable for a certain ship.

The third group are new player certificates. There's a class for each combination of race and starting specialization, giving 24 classes. When you first log into the game, you'll qualify for the Basic certificate of the relevant class. Working up through those certificates will get you into bigger and better frigates, up your skills in certain key areas and eventually get you into a cruiser- or hauler-class ship with the basic skills needed to use it well. This gives new players a very clear (but entirely optional) path to follow for skill training which will eventually get them into a bigger ship with all the right supporting skills.

A certificate is a thing that says you have certain skills, and can require other skills and/or certificates as requirements. They're shown in the character sheet and have their own browser window where you can navigate around the certificate tree. You can show them to other people if you want. Certificates are not mandatory and do not give you any bonuses or other special abilities.

Any more for any more?

So... yeah. That's basically what we've done! This stuff should be hitting Singularity very soon (if indeed it hasn't arrived already by the time this reaches you), which should give everyone a chance to have a fiddle with it and see how it works out. If you've got any feedback, please do pass it on, as we're always looking for more input from players.