Dominion has been a busy time for CCP as a whole, and the Content Team is no exception. Fresh off the release of Apocrypha 1.5, we tackled numerous tasks at once. Our primary contribution for Dominion, the pirate arcs, has already been detailed by CCP Jasonitas. The other major task for this release was in support of the awesome NPE team's new tutorial arcs. But that's not all we've done for Dominion. This release sees several small tweaks and changes that don't warrant individual devblogs, but as a whole are important enough that we didn't want to leave these buried in patch notes. Now we present to you Dominion: Content Team Devblog 2: Buckshot Edition!

I Can't Quit You Baby

Imagine a world where you couldn't earn awesome things. You've destroyed fleets, razed stations, and rescued the Damsel over 473 times. Now at last, you're on your Epic Arc, you're taking out the enemy construction yards with the plasma-neutron-accelerometer bomb, and when you finally turn in the mission you're told you can' t have more than a standard level 4 payout. Hooray.

When Apocrypha was first being developed, the flagship Epic Arc - "Blood-Stained Stars" - was conceived as a new player-friendly experience. To that end the system was designed to not allow the player to accidently quit or decline out of the arc. It worked well for "Blood-Stained Stars," but as we proceeded to author higher-level content this behavior became less desirable.

With the new pirate arcs, we've brought back the ability to quit. Simply put, if you quit from or decline missions in these arcs, then you're out of the arc. There's no running that mission again in an exploitable loop. The three-month timer still kicks in, so if you quit out of the arc you can try again in three months' time. While this makes these arcs more risky, it also allows us to be freer with rewards. Previous arcs will continue to behave as they always have.

Another feature in Dominion is our new batch of Gallente Storyline missions. There are two main mission types, "Mining Base Camp" and "Troop Buildup," each with variants based on difficulty and particular target. Each mission stems from the past year's Faction Warfare resultsHeth's resultant sale of key Gallente systems to the Caldari megacorps, and the Federation's reaction.

We're excited about these missions. We coordinated closely with CCP TonyG, CCP Ginger, and the rest of the EVE Storyline Board for specific PvE content. Also, these missions send players to specific solar systems rather than simply sending them some random number of jumps from the agent's location. This allows us to draw out themes for specific locales in the EVE universe.  There are also obvious potential impacts on player traffic that we are eager to watch.

Why only Gallente? This feature wasn't planned in the beginning. The Fates were kind enough to open a window for us. But we only had enough time for one faction, not all. Between some or none, we opted for none. If you guys respond well to these missions, we'll definitely produce more. So why Gallente? We were keen to play with the storyhooks in-game that have been dangling around the ingame news for months now. Expect more integrations of news and fiction with in-game content in the future.

Bring It on Home

Although these first pirate arcs are Content's primary feature for Dominion, we also made a point of revisiting epic arc content done over the past year.

The first step was tweaking the rewards for the Apocrypha 1.5 arcs. It became very clear, very quickly, that our item rewards were problematic. Many of our new items were designed too conservatively. A few were too valuable relative to the others. So for Dominion, we put together some new stats for the item rewards that were lacking punch.

Note: These new properties will be applied to the item IDs already in game. Anyone who has kept their rewards from a previous Empire arc will find their item(s) automagically updated, as follows:

Our next step was a change to the Epic Arc system's "Agent Interaction" missions. Previously, after the player selected a choice for the next mission, the agent would then offer that same mission to be accepted again. Not only was that weird on a conceptual level, but it introduced a few hiccups in the system, most notably a duplication of Initial Gift items. So we changed it.

Now, when you make your selection in the Agent Interaction, you are placed directly into your chosen mission without having to accept it a second time. No more redundant mission offers! Extant texts were modified to ensure no important information was lost with this change.

Your Time is Gonna Come

Now it's high time to deliver one feature we'd been aiming for since Apocrypha: faction standing rewards. This feature was supposed to go out with Apocrypha 1.0, but other technical limitations prevented us from including it; previous mission systems that rewarded a player with faction standings were hardcoded based on the mission system type. COSMOS, Event, and Storyline agents were the only ones who could give out standings.  (Moreover, it was impossible for them not to.)

This worked fine for the respective systems, but it caused problems when we wanted to do something that gave us more authoring control, as in the Epic Arc system. Unfortunately, sometimes part of being AgileTM includes being able to let go of features when such a problem arises, and standing rewards were always a "Should" feature giving way before "Musts."

But no longer! Now, completing an Epic Arc can reward you with large standings boosts with the relevant faction, depending on the ending reached. This includes the new pirate speed boat arcs, the Apocrypha 1.5 empire arcs, and Apocrypha's "Blood-Stained Stars."

Dominion gave us a chance to add a number of small tweaks to mission feedback. A little bit of information goes a long way. These features are automatic and work with existing content formats.

Have you ever flown halfway across a region in your sluggish battleship only to find that the acceleration gate won't let anything in that's bigger than a cruiser? No more, thanks to our handy ship restrictions message! Now if you are offered a mission that has a site with gate restrictions, a message will display in the mission offer to alert you of that fact. To find the restrictions, simply click the link and a list of allowed ship types will be displayed. 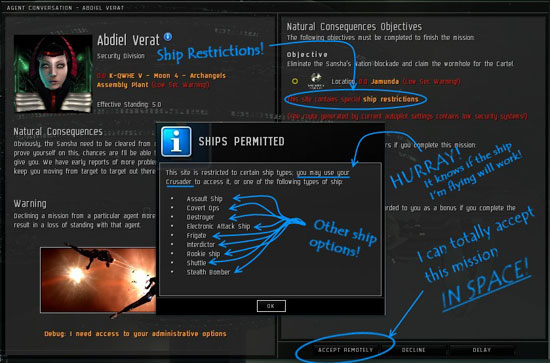 What of "Accept Remotely" and "Complete Remotely"? These were introduced in Apocrypha, but not in a form that could be applied to existing missions. The result was that players had to guess if their mission could be completed remotely or not, effectively making the feature moot. We've addressed this with two changes.

First, in the agent dialogue itself, the "Accept" and "Complete" buttons are switched out with "Accept Remotely" and "Complete Remotely" where applicable. Second, the mission's entry on your Journal's "Missions" tab displays a balloon icon when one of these features is active. Simply hovering over the icon will display a tooltip that lists which options are available.

That's it for our part of Dominion. Our commitment to iteration remains strong. We also keep a constant eye on the future. Even now we're working on our backlog of missions for use in future releases. There are a lot of exciting things happening in the world of EVE. We're thrilled to have the opportunity to be a part of so much. And we hope you guys have fun using our efforts to shoot each other in the face.