As we announced at Fanfest 2013, CCP and Dark Horse Comics are publishing EVE Source, a 200 page illustrated guide to the EVE Universe, its people, places and history.

Information which before had to be collected from chronicles, novels, mission descriptions or wikis has been compiled, organized and edited for your reading pleasure. This is the authoritative guide about the Universe for any EVE enthusiast, whether they are a decade old-vet or just joined this past week. 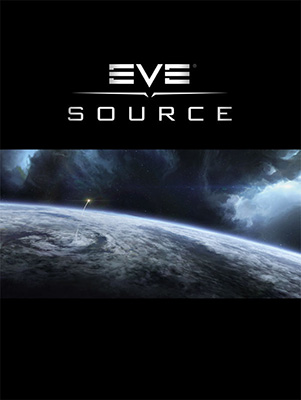 In EVE Source there is A LOT of art. While some of the images may be familiar, a significant amount of art was originally made just for this book by the EVE and DUST 514 art teams. It fleshes out parts of the setting of the EVE universe, New Eden, which before have never been seen or talked about, creating unique perspectives on the stars and planets that Capsuleers and Mercenaries call home. 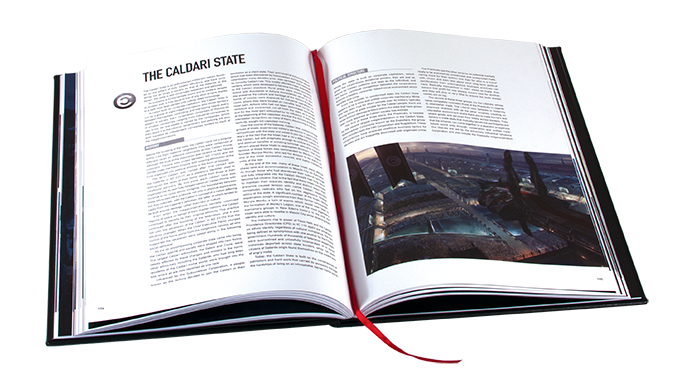 When work had begun on the book, it began to dawn on us the amount of information and visual candy we had on our hands, so we wanted to take the opportunity and make something more special with it for those that are truly citizens of New Eden and want to celebrate it with nice things. So we worked with Dark Horse to develop a limited edition version of Source. 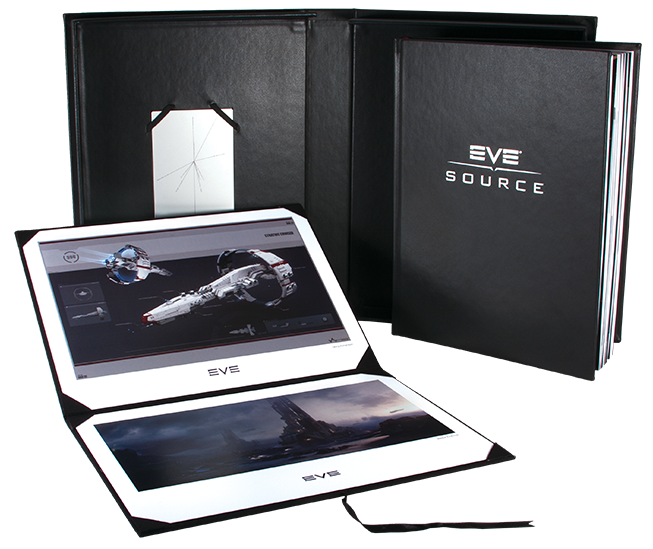 It comes with a trusty protective case, is bound in sci-fi-esque JVP leather, and is graced with a nice red ribbon for you to remember which Guristas pirate you were reading about.

Inside the lining of the protective case, you will discover a numbered anodized aluminum commemorative plaque. The plaque itself has an enigmatic image, which is for you to decipher. This printing method and material ensure that the plaque should last eons. It will probably still be there, in mint condition, in the year 7703 when the wormhole to New Eden opens.

On the plaque you will find a unique code which you can use to redeem the following items inside EVE Online:

There are only 1400 copies of the Limited Edition. That's just the limited edtion, there are more copies available of the standard hardcover edition.

1000 units of the limited will be sold through the EVE Store, while 200 copies are distribited through IKON in Australia and New Zealand, and 200 units will be sold by Dark Horse at trade events, details to be published later.

It also contains lithographs by two EVE artists, Borkur Eiriksson and Georg Hilmarsson. The first 500 copies sold will be signed by them. For your convenience, there is a counter on the EVE store which tells you how many signed images are remaining.

EVE Source Limited Edition will be released on March 5th, but is available now for pre-order exclusively at the EVE Store. Head there to get your copy

Eve Source Limited Edition costs $89 plus postage and packing for US and Canada. €79 for EU countries (including VAT) and €65 for non-EU countries. Prices do not include postage and packing. Tariffs, customs, taxes and postal worker bribes or protection money may have to be paid as well, depending on where you live in the world—the unavoidable nature of courier contracts. 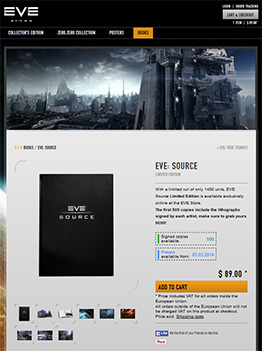 If this is all a bit too much for you, and you prefer the classic hardcover version of the book, check out Dark Horse‘s partner Things From Another World. They will begin shipping on March 5th, but are already taking pre-orders. Select comic book stores will also make the book available on March 5th.

The retail price is $39.99, although prices may vary by regions and VAT, postage, packing and discounts.

If you want to wait, EVE Source will be released to regular brick and mortar and online bookstores on March 18th. On the same date, it will be released an ebook on Dark Horse Digital, Kindle, iBooks, Google Books, Nook and Kobo.

We hope you enjoy reading it as much as we enjoyed developing it!

PS: More pictures can be seen in this devblog since October and on the individual product pages