We announced on The o7 Show we are planning to make some changes to the way fleets work. Since then we’ve had lots of amazing player feedback, and based on that feedback we’re making some tweaks. Unfortunately this means we’ve had to push back the release of these changes to the August 25 release. 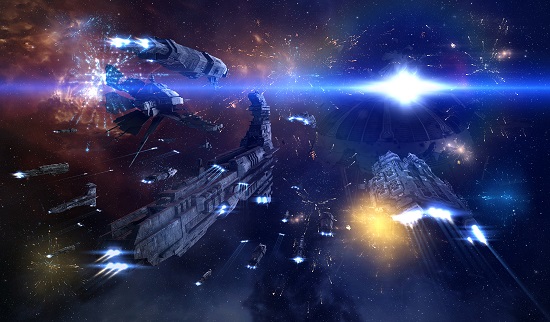 What are the planned changes?

After feedback and discussion, we’ve done some magic on our code and now a wider range of objects will be broadcastable as a Warp-To:

What are the goals of these changes?

We believe that every player’s actions have an impact on New Eden. Sometimes that impact is small, little more than a ripple. Other times it is a tsunami, shattering empires and destroying dynasties.

Fleet combat is an exciting and engaging part of EVE Online. Individual player actions are the foundation of fleets. Getting the primary target stasis webified to allow your buddies to hit for full damage. Pulling off that critical jam on enemy logistics. All actions of individual players have the potential to make or break fleets.

Fleet-warping discourages individual player participation. It’s more effective to have the Fleet Commander warp the fleet around rather than each pilot warping themselves. This mostly mindless type of movement reduces the impact of each fleet member’s actions on the outcome of the combat. Drone assign was another example of this type of proxy gameplay that we have reduced.

Following the changes, fleet warps will still be possible but will require greater participation by fleet members, such as getting a scout into position. Often fleet warps might not be the most effective solution for movement.

Increase the time it takes for fleets to close ranges

It is time to return some viability to long-range fleets. The proposed changes make it a little harder to close the range to such a fleet, by reducing the efficiency of fleet warping to a very quick on-grid combat probe result.

The most common long range (defined as +150km) fleets seen in recent times are “Slippery Petes”. These are specialized Tengus that are fit with lots of ECCM, making them difficult to probe down. The combination of on-grid combat probing and fleet-warps have choked out most other long-range doctrines.

We expect these changes to give long-range fleets time to deploy countermeasures, such as stop-bubbles. It gives an opportunity for players who enjoy flying cloaky ships and probing to distinguish themselves as valuable assets in a fleet. We anticipate an increase in cool new doctrines being flown.

The ease of performing bomb runs has stifled the use of battleships and battlecruisers in 0.0 space. Fleet-warps simplify and reduce the response time of bombing runs. With a few probe-equipped squad commanders, it’s easy to land many simultaneous bombing runs on an enemy fleet only a few seconds after they come out of warp.

The changes to fleet-warps will make bombing runs harder to pull off. However, a group of dedicated and well-coordinated players can still decimate entire fleets. We expect bombing runs to take a little longer to setup and execute, giving their targets time for counter-gameplay.

EVE Online is about interaction, and fleets are one of the primary methods of doing so. Being in a fleet should be an engaging experience. If you have suggestions for the future or feedback for the planned changes, please post in the comments thread for this blog.