Between the Fanfest presentations, various cryptic Dev posts and latest Inferno changes we put out on the Singularity test server, speculation on Factional Warfare has been running rampant all over the forums, like a violent storm gathering strength across the horizon. And for good reasons if we may add, as this feature has been left in the dark for quite a while, sobering for some well-deserved love it will now properly receive: time has come for us in Team Game of Drones to shed some light on the matter.

In a far far away land

It all began around Crucible release, as part of an effort to iterate on features that desperately needed some love. Factional Warfare was quite a high choice on that list, and thus we got to work; initial investigation by looking at player threads, CSM communication, various metrics and internal brainstorming’s lead to a high-level pitch that focused on improving rewards, consequences and visibility in Factional Warfare.

Fanfest was the perfect opportunity to present it to our player base. We really want to thank everybody that showed up for the presentation and round tables as these were great places for us to listen to incoming feedback. There was a lot of discussion on some controversial features, and as a result we had to reprioritize our plans. Some ideas were scrapped, others delayed as we chose to focus our efforts on points we were most confident in.

Standardization - one naming metric to rule them all

The first point we wanted to tackle is quite cosmetic. While we do recognize that players joining Factional Warfare do so for reasons that most often set them apart from 0.0, we were not satisfied with the lack of consistency EVE displays regarding its territorial warfare mechanics.

We feel having unified names and indicators in both Factional Warfare and 0.0 would be quite beneficial, even if actual mechanics should stay separate so as not to convert one into the other. Factional Warfare has very localized territorial mechanics that don’t carry so much perceived worth anywhere else, and that are confusing for being radically different with anything else EVE has to offer.

That is why we are renaming Occupancy, Control Bunkers into Sovereignty and Infrastructure Hubs. The point is to improve clarity, as anyone can quickly grasp and realize the tactical value of the following notions no matter to which security status they apply:

As a side-effect, the previously numerous confusing Star Map Occupancy filters have been simplified and sorted under the Sovereignty tab. 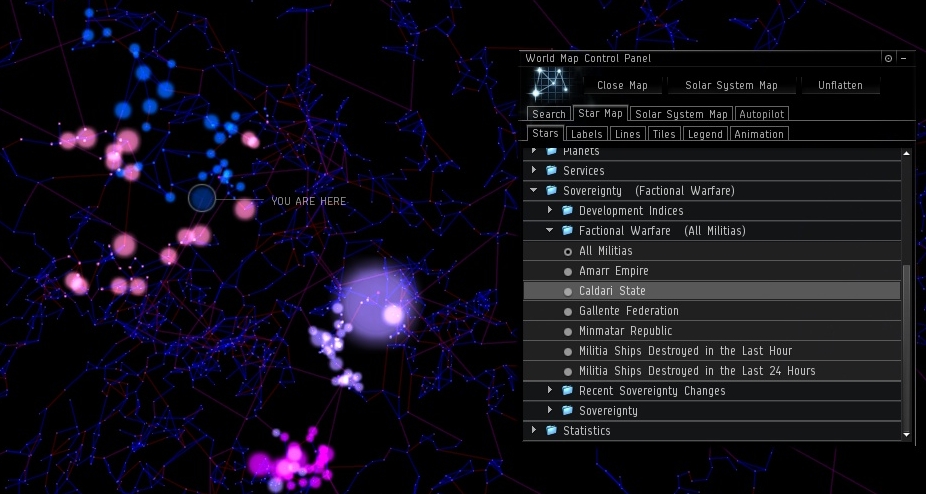 We had a look into visibility issues as well, as we were quite not fond on how old the information was displayed. For starters, the Factional Warfare recruitment page was cluttered with a lot of text and wasn't clear about rules and consequences for joining up, all of which while trying to display statistics at the same time. This was a pain for new players trying to join, as they had little clue how Factional Warfare was actually working and it would often deter them from pressing the magic “join” button.

We changed that a bit by splitting information by tabs, cleaning the window in general, and defining the rules a bit better.

We also put a lot of focus on various UI enhancements to help make life easier, mainly the Infrastructure Hub, join up page and main system information. The results can be seen throughout the screenshots in this blog. 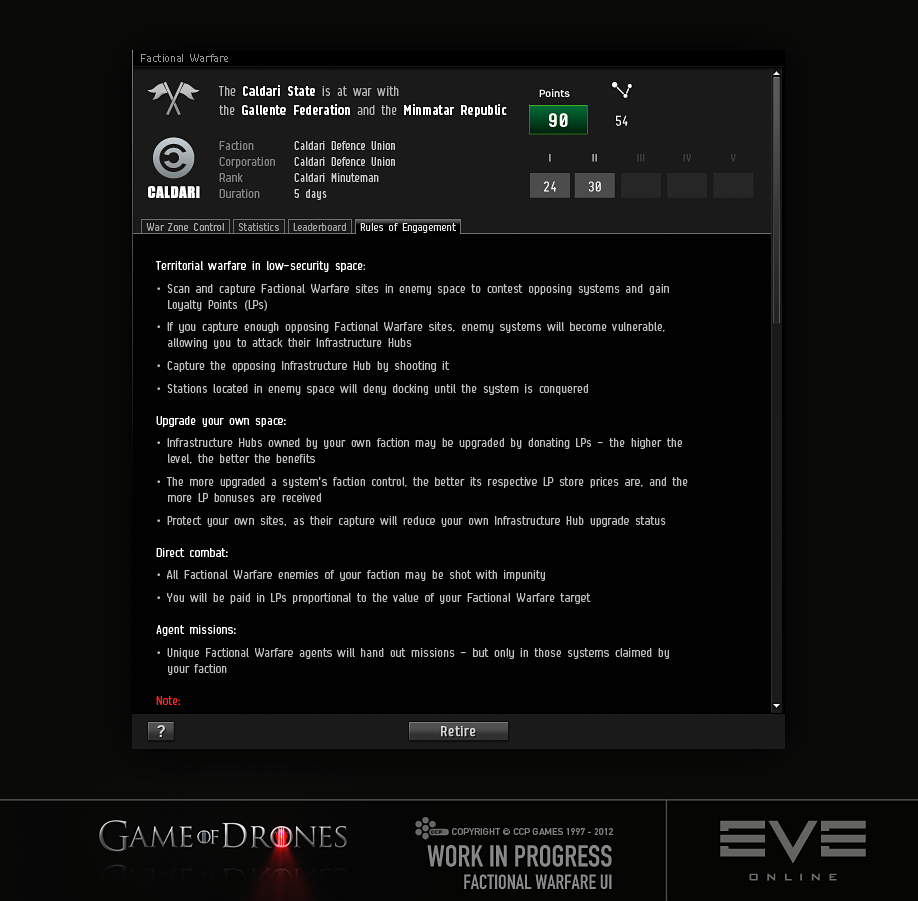 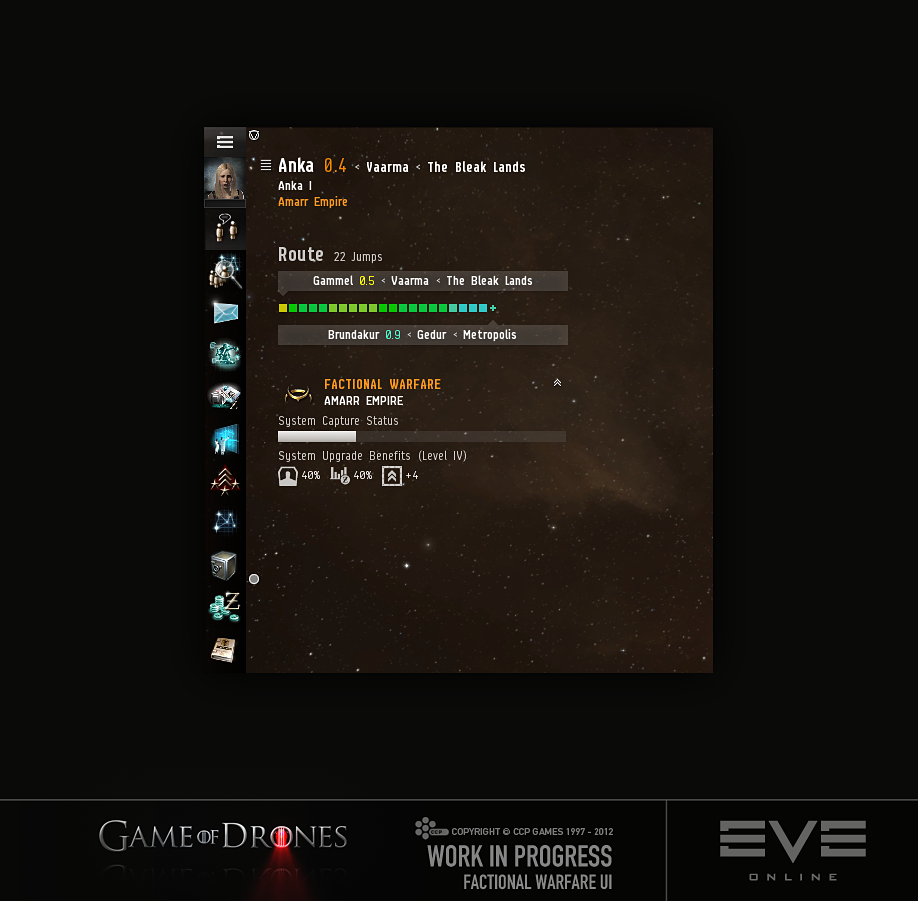 Another field that needed iteration was related to the lack of consequences for participating. As its name implies, Factional Warfare is supposed to be an actual bloody struggle raging between the various factions. However it currently lacks proper reasons to do so, as little matters when a system is taken. That's a fact we want to tamper with, as to encourage players to be actively helping the war effort by fighting for their faction.

As such, with Inferno, all stations within a low-security Factional Warfare system will now deny docking to any factional enemy (neutrals will remain unaffected). That means restricting any kind of service or agent access to all pilots in opposing militias.

However, due to CSM and player feedback, we do recognize this would be detrimental to players across various time zones, as going to sleep only to find out the station you docked at changed control during your absence is nothing but appealing. That is why we are reducing the number of Victory Points handed out from FW complexes by a factor of 5, thus increasing the average time to capture a system from 6-7 to 30-35 hours. 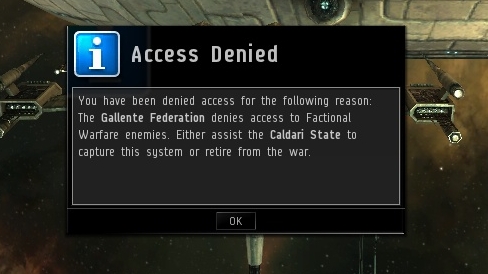 Holding solar systems currently lacks appeal and we wanted to improve that fact. In Inferno, the faction controlling a Factional Warfare system will be able to donate Loyalty Points into the local Infrastructure Hub to gain benefits, like extra station slots, medical clone cost reduction (doesn’t apply to jump clones), and market taxes reduction. For now, all of this applies to neutrals as well in an effort to promote third party industrial activity to support your war effort; this may change in the future depending on how the alt farming situation will evolve, especially if and when we add new benefits. 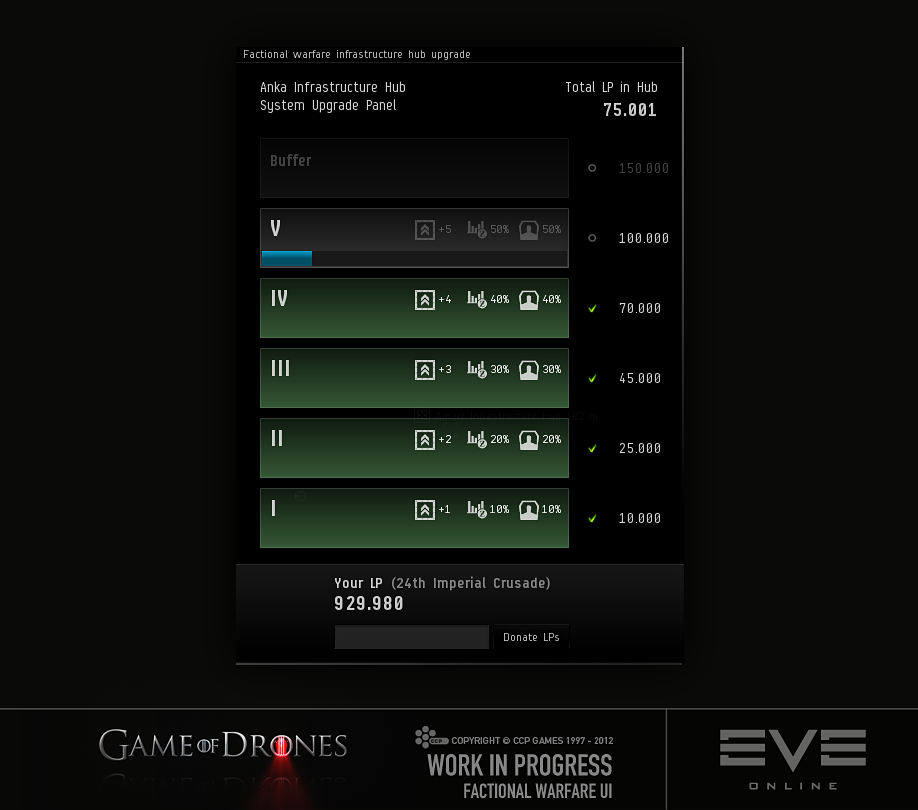 On the bigger scale, we wanted to help participating players feel more like they were in the middle of a fluctuating war zone rather than just participating in a line of unconnected skirmishes. That is why progress will now be tracked by counting the number of solar systems held, how many upgrades are installed for each faction and compared to the faction's enemy over the regions being competed for. 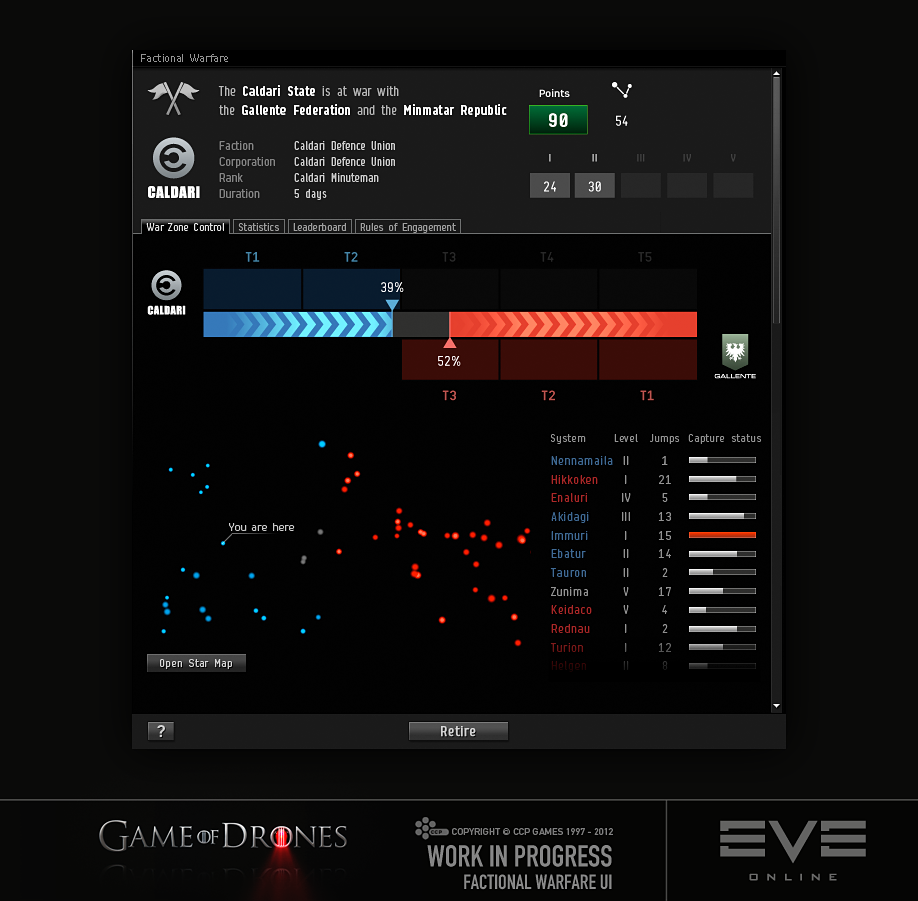 First, the offer requirements in the respective faction LP store will decrease. As such, at the lowest tier, LP store offers will be 4x times more expensive as they are now, while at the highest tier, they will be 4 times as cheap. This only applies to ISK and LP requirements for offers, not tags or items. It also only counts for the 4 Factional Warfare militia LP stores; no other corporation will be affected.

Second, all members of a specific faction will receive bonuses to all Factional Warfare LP gains, varying between 0 to 20%. Such increases are not tied to a specific solar system and will be granted for any kind of Factional Warfare activity that grants LPs (PvP kills, complexes, missions).

Another field that direly required some attention was the lack of benefits for actively participating in Factional Warfare. In the reward ladder, helping your faction in territorial warfare should reward the most, followed by PvP, and then finally PvE with missions. However, this actually is the opposite right now as missions pay the most while they impact the least in your faction territory. We really want to reward individual players that take risks and participate in PvP and conflicts, rather than promoting safe, passive incomes.

We would like to improve payouts by giving LPs for capturing enemy complexes and Infrastructure Hubs:

Please note such LP is split for all eligible members that meet all capture criteria; as such, 2 Amarr enlisted pilots capturing a Minor site would only receive 5,000 LPs each.

Capturing complexes will also cause half of the gained LP amount to be removed from the enemy Infrastructure Hub in the solar system, possibly causing the upgrade level to go down; this is part of an effort to encourage players to defend their space when attacked. However, defending dungeons do not yield LP for now, to avoid abusive farming in a single set of safe systems. This situation may be adjusted in the near future if the situation warrants it.

In Inferno, we will also properly reward PvP kills, as we are not satisfied by the very small payout it delivers currently. The new formula now will correct this, by handing LPs proportional to the ship value lost, the exact formula being:

Please note that insurance is always counted as maximum value no matter what your ship actually has to avoid farming. If the killing blow belongs to someone in a fleet, all eligible members will receive a split share of the LP booty, even if they are in the allied militia.

Example: a fleet of 2x Gallente Federation and 2x Minmatar Republic members destroy a target enlisted in the Caldari State worth 4000 LPs. No matter who had the killing blow, each Federation pilot will receive 1000 LP for the Federal Defense Union, while each Minmatar capsuleer will gain 1000 LP for the Tribal Liberation Force.

Below are some examples on how the new formula pays out next with market values taken from our internal test servers:

A change mentioned during Fanfest concerns datacores and research agents in general. While we do acknowledge that initial the initial period to train up for high-level research agents take times, effort and money, we are not particularly fond of the passive datacore income in general. Indeed, once the initial requirements are met, this is not so much of an active profession and more of a passive collection of items, which we want to look at.

As such, we are removing all field multipliers on research fields, while unifying RP amount to claim one datacore to 100. While this actually double amount of RPs to claim a datacore, we also are introducing a small 10,000 ISK fee per datacore to ensure there is a small cost tied to their retrieval.

We also are introducing datacores to the Factional Warfare LP stores, spilt into each individual faction so there is no market overlap. They are tied to the War Zone control effect on LP store prices, that means offers will dramatically change depending on which side is winning.

It is particularly important to emphasize here we are not planning for balanced outcomes, as we expect and endorse expensive prices coming from a crumbling faction. This however doesn’t mean we won’t act to make it more difficult in the future for each side to achieve total dominance if they already own a majority of systems (basically, implementing diminishing returns of some kind).

While our current intention is to turn datacore gathering into more of an active profession than it currently is, we will be following feedback closely to make sure players that invested time into Research corporations are not abandoned, most likely by making further changes to them in the next release.

A glimpse into the future

We have dedicated a lot of effort to improve Factional Warfare as a whole, and we hope all of this will contribute to better it in the long run. But don't take our word for it: save some cheap PvP fitted ships, and when Inferno hits, give it a shot. Go in there, shoot stuff, get killed and experiment with tactics - that is the point. When you have done all of that, come back and tell us what you think. We crave for feedback and we are not stopping here: we are committed into keep looking at Factional Warfare during next release as well and your feedback will ensure we are doing it right.

As a parting gift, here are some points for us to consider in the near future: