So I made this neat graph using our CPU utilization per user metric and I thought I'd share: 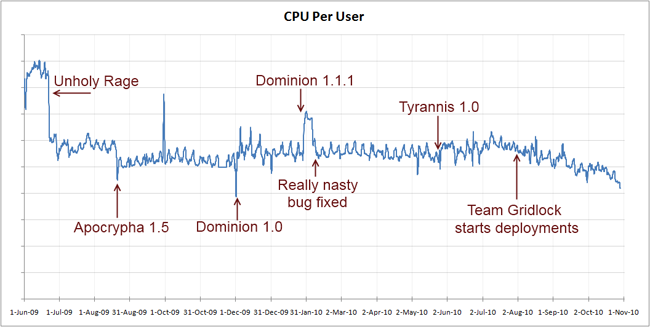 Some observations of random usefulness:

Now, some caveats on this metric:

As a general "how's the cluster doing CPU-performance wise" metric, it's pretty good. It's the best we have available for sure. As far as this metric is concerned, and for as long as we've been tracking it, we've not been better.

I really wish we had a metric for "number of players that can all shoot each other while the server is nice and happy", but I'm not even sure how we'd go about defining that, let alone getting enough samples to make it a sane metric. It stands to reason though that if player actions are requiring less CPU in general, they should require less in a big fleet fight than before, which would yield more people with similar performance.

I'm sure you'll all help put that reasoning to the test as we continue to push down the performance hotspots. 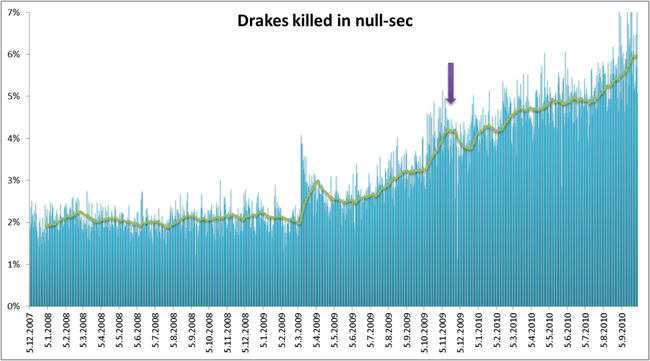 Compiled by CCP Atlas, this shows the rather notable rise in the use of the Drake in null-sec. The purple arrow is the deployment date of Dominion 1.0.  It's worth noting that the trend starts well before the Dominion release.

This is a notable shift in ship usage as missiles are considerably more CPU-intensive than guns. It's likely that some player behaviors have helped shape the "lag is worse since Dominion" sentiment, in addition to whatever sins were in the release.