Team Pirate Unicorns here with an update on our iteration work with the in-space brackets list for the Crius release on July 22nd. That’s the list that comes up when you mouse over something.

As per our recent Test Server Feedback thread, we have introduced a ‘compact list’ mode and made some changes to the bounded list view. Additionally, the visibility of the list text strings and the layout has been improved. These changes have been on the Singularity test server for a little while and remain available for testing and feedback—so head there to check them out. 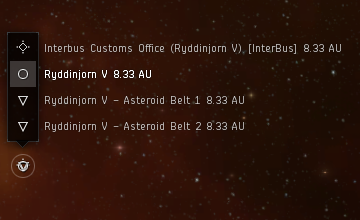 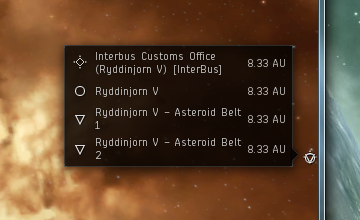 Originally, we planned to have the compact list display for bracket icons actually ‘in view’ in their correct position in the space scene, and retain the fuller bounded view for brackets that have been gathered at the edges of the scene because they represent out-of-view objects. After some feedback about this decision, we have decided to give the option of displaying either the compact list or the bounded list. This option can be set independently for both brackets gathered at the edges of the space scene and those in their correct positions in space. 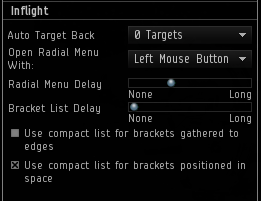 We are capping the list at 15 items in both modes, which reflects the pre-existing cap on the bracket listing. To raise this number carries with it some concerns regarding performance and we don’t believe there is a strong case for a higher number as things stand. The balance of feedback was against scrolling in the bounded mode and this again factors in the decision to cap the number at a manageable set of items.

The latest changes, with the list mode options, should shortly be available on the Singularity test server. These improvements will be made available on Tranquility in the Crius release as part of our ongoing player experience work.

As the in-space brackets are a completely different feature to tooltips per se, we have been concentrating initially on improving this key part of the UI. Now that this has been done, we will look at improving the experience with tooltips in later releases. In that regard we are looking at configuring tooltip behavior by category, which we think would allow for you to tune how tooltips display based on the relevance of the information to you.