With our upcoming expansion, EVE Online: Incursion, we will be rolling out entirely new avatars for all of our characters and NPCs in EVE Online. The character art is one of the few remaining pieces from the game that has remained as it was when it launched back in 2003. We've updated the ship graphics, the celestials, gates and stations, and now it's time we modernize and update the characters. We've created unique models for each bloodline,race and gender, 24 in total, along with new hairstyles and clothes. We even have shoes and underwear that you can play around with, even if they won't show on your portrait. That doesn't matter, though, because you will know what color underwear your character is wearing, and that is important.

The portrait generated will still be a torso portrait, that will work exactly the same way it does in game today. It will show in chat, in your character sheet, on EVE Gate and on the forums. There will be more options with posing, lighting and placing the camera though. So even if your character is full body, you will need to wait until the first release of Incarna to enjoy their, ehm, full bodies.

The art style is still very EVE. We opted for strong archetypes, making the races and bloodlines easily distinguishable and recognizable, but we are providing a broader range of scultping options and skin tones within each bloodline for more variety.

Does that mean you are releasing Incarna now?

No, just characters. This is a major overhaul in terms of art and technology, and paves the way for allowing you to explore the corridors of space stations in subsequent expansion. Yes, just to be clear, Incarna, the expansion where you can walk around as an avatar is not coming out this winter, but the first release of it is planned to come out next summer, in 2011. However, in the same way we introduced new planet graphics in Dominion and then Planetary Interaction one expansion later, we are introducing updated avatar graphics now in Incursion.

Redoing the characters of EVE Online is a major task. Not just technically, but also in terms of art and story. We tried to stay true to the spirit and style of each race and bloodline, while improving and refining the style and, in a way, correcting the mistakes of the past. However, we are very much aware that we are changing the face of your avatars. The characters have represented you since you started playing the game, and we realize that many have strong emotional ties with the character or look that they had created. Famous personas from the EVE community will have a brand-new face. We strived to approach the issue with the utmost respect and professionalism, but certainly many players will not agree with the changes that we‘ve made to their races or bloodlines. It will be impossible to create something new that the entire population of EVE players will agree with. We truly hope that, through the customization tools and high-fidelity assets, you will be able to re-forge your favorite characters to your liking and create a new and improved version of your online self. The assets we are replacing are some of the oldest in the game. Most of our avatars were built in 2001-2003. That‘s a very long time ago. Nokia banana phones were still considered cool and futuristic. Some of our avatars have earplugs with wires, akin to bluetooth headsets, as those were considered futuristic as well. Obviously, we need to move on and update these characters.

Do I have to  change my avatar?

Yes, all existing characters will need to have their portraits redone. While the new character models are based off the same backstory and mood as the old characters, the new characters are more hyperrealistic, less cartoony, and of course, higher fidelity. They are capable of expressing emotion, animating, wearing a broad range of clothing, and they allow for deep customization and accessorization (if that‘s even a word).  They also have feet, which is a huge evolutionary step, made possible due to them having feet.

Do I have to recreate my character when I log on?

Since all of the old character assets will be deprecated, you will need to recreate your avatar if you don‘t want to look like a silhouette. You will not be forced to do so the minute you log in, however. There will be a grace period where players can be logged in with characters that have not yet been updated. The duration of that grace period has not been finalized.

Will I be able to change race, bloodline or gender on existing chars?

If you already have a character for which you need to redo your portrait, you have to do it within your current race, bloodline and gender. It‘s not impossible to think that in the future you may clone jump into bodies (clones) of different races, bloodlines and even genders, but that function will not be available on Incursion launch.

Where have all the sliders gone?

The new character creator is more hands-on than the old one. We really wanted you to feel like you were sculpting the face yourself and tried to limit the amount of sliders as much as possible, putting sculpting of the face and body and posing of the face into the character model. In sculpt mode, you grab onto the nose and move the mouse to make it a bigger, push in the chin, pull the forehead and so on. Once you‘re done sculpting and picking clothes, hair and such, you use the same method for posing. You grab your eyes and move them to control where your character is supposed to look, you grab the mouth to make him smile, and pull on the eyebrows to make the smile look a little mean.

Can I try it out?

Yes, we are releasing it onto Singularity in the next few days. However, the assets and the technology is far from finished. Singularity is our test server. We put things there to see how they break. You will be able to play around with a total pre-release client full of temporary assets, clunky UI, strange behavior and slow loading. You will be able to create incredibly bad looking characters, dressed funny and posed silly. In a way it‘s a marketing faux pas, since the character creator on Singularity is far from being ready. This, however, is the way we roll. We publish unfinished stuff to our test server to allow you, the players to have a go at our new technology, to find defects, to have it tested on all kinds of different hardware configurations so that we in the end deliver a higher-quality product.  With your feedback, we make the game better, but be warned, this is not the final product. Some avatars will look awful and ridiculous, with glaring visual artifacts and defects. Did I mention that some of them will look awful? 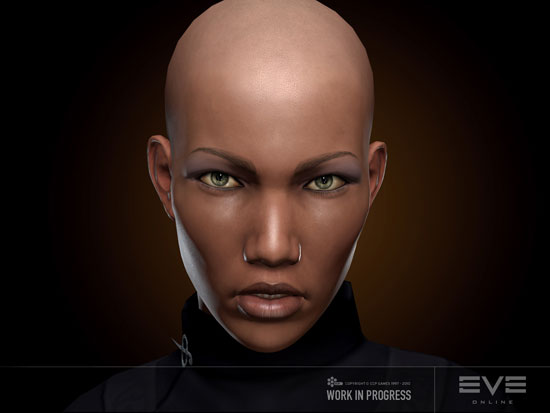 I leave you with an in-engine screenshot of the new Minmatar Brutor female. Not all bloodlines and races are ready at the moment, more screenshots will be coming in the following weeks as our artists, engineers and designers put the finishing touches on the new character creator and ready it for launch in Incursion. We truly hope that you will enjoy the new characters as much as we enjoy building them for you.