When we asked the art department to craft a new ship to give away over the summer, we weren't expecting something quite as awesome as the Primae hull. In retrospect we probably should've seen it coming, given the quality of stuff they consistently turn out, but our minds were on other things. After seeing the finished product though, we agreed pretty quickly that this design was too damn cool to just be used for a limited-run freebie.

Even before the Primae was properly finished we were knocking around ideas for how we could reuse it, and as the original Primae description shows we were thinking about salvaging early on. Ever since we implemented salvaging it's been crying out for a dedicated ship type, and while the Marauder class can be shoehorned into the dedicated salvager role, it's a little too expensive to use in that way on a regular basis. As a result, a lot of people end up doing their salvage work in either destroyers (cheap and convenient, but lack the cargo space, cap stability and bonuses to be really efficient) or other larger and more expensive platforms such as BCs (inefficient for their price).

Therefore, allow me to present the Noctis:

Screenshots taken with just the ORE Industrial skill to level I, so you can see the base stats.

For those wondering, the tractor beam cycle bonus is a mild timesaving tweak - anyone who's tried to really optimize their Marauder salvaging has probably become a little frustrated with waiting for tractors to finish cycling, and with the increased speed that the Noctis will be pulling things in, the default cycle length will end up wasting a fair amount of time. The tractor cycle bonus is meant as a mild offset to this; the salvage cycle bonus is more obviously useful.

We'll be seeding the new skill and blueprint in ORE stations everywhere (ie, Outer Ring) in the next expansion, retailing for 1,600,000 and 390,000,000 respectively. Aaaaand... that's about it, really. Hope you find it useful! 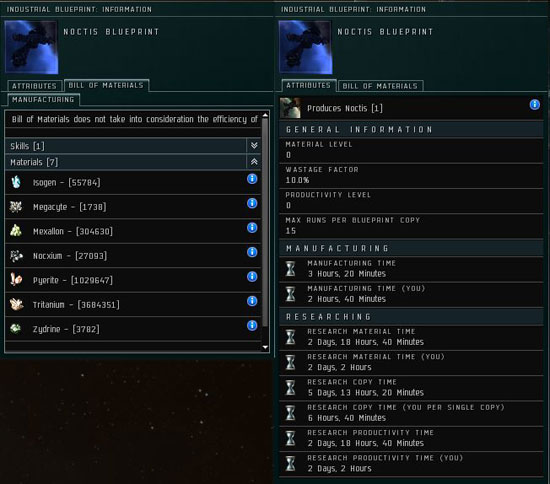