ORE Primae ship nearing distribution – a gift for all capsuleers

Today, Outer Ring Excavations ORE CEO Afait Assette surprised New Eden with an announcement in what seemed to be an impromptu but well-orchestrated press conference from the normally tight-lipped executive. She led off her prepared statement with the following message addressed to all capsuleers.

"ORE has prided itself on being at the cutting edge of the multiple industries based on extraction and refinement of natural materials. We have provided capsuleers with the ships, knowledge and materials to retrieve innumerable resources, from some of the rarest minerals in the universe to the humblest chunks of Veldspar. Now that tradition continues. I am here to unveil the Primae, a technological marvel capable of catalyzing the recent, burgeoning industries on the planet surfaces of New Eden.

And, now that full production of this robust vessel is underway, I can safely announce that our agents will be delivering one Primae ship to each capsuleer in all corners of the universe, free-of-charge, to try out for themselves. We firmly believe in the proven technology ORE has to offer and trust that pilots everywhere will come to as well, having been given this unique, unprecedented gift to fly for themselves. No strings attached."

With that, Ms. Assette unveiled a marvelous work of concept art for the ship for the stunned crowd, reproduced below. 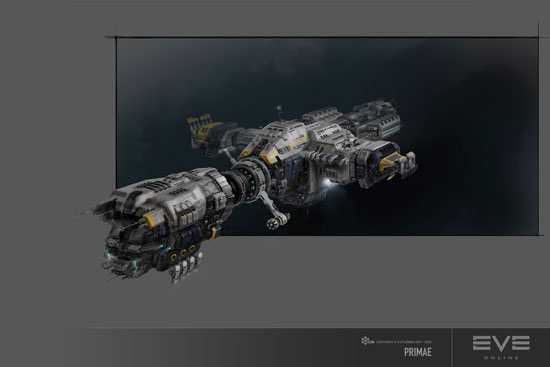 Following the announcement, Bougale Baille, Survey Manager for ORE, was quoted as saying, "It's astonishing how quickly pod pilots have adapted to planetary production models. Some are turning record profits when compared to industry benchmarks, pushing the limits of what our brightest scientists thought possible."

It is clear that Outer Ring Excavations ORE has been closely following the effects of the recent CONCORD decision to lift the universal ban on capsuleer involvement in planetary affairs, searching for opportunities to modify our business to complement the "immortal" pilots and their proven financial and industrial acumen. Further insight into the design process of the Primae project has become available, shedding light on ORE's brilliant business move.

The Primae is a repurposed ORE design intended to ease the task of extracting resources from planetbound environments. Initially devised as a deep space salvage vessel for large-scale ore retrieval from destroyed ORE fleets in pirate-occupied areas, its previous incarnation was made all but obsolete by the arrival of capsuleers on the interstellar scene. Realizing that the ship could, with a few minor modifications, be made into an efficient resource harvesting aid, ORE wasted no time in revamping the design.

A low signature radius (a holdover from its earlier manifestation) adds a layer of defense to the Primae‘s already decent plating. In addition, the ship‘s two large bays have been re-engineered to hold equipment for planetside resource extraction and processed materials, making it an especially useful complement to any planetside harvesting endeavor.

The Primae ship hulls are being transported under contract by Interbus, and are scheduled to arrive in hangars across New Eden beginning next week.

Beginning June 29, 2010, you will find the ability to redeem it on your account login screen. You can then assign it to a particular character and a friendly ORE agent will deliver it to your hangar bay. You will be able to redeem the Primae once per active (not trial) account and will no longer be available after downtime on Tuesday, July 13th 2010, so make sure you log in to receive yours.

Here‘s how to redeem it: