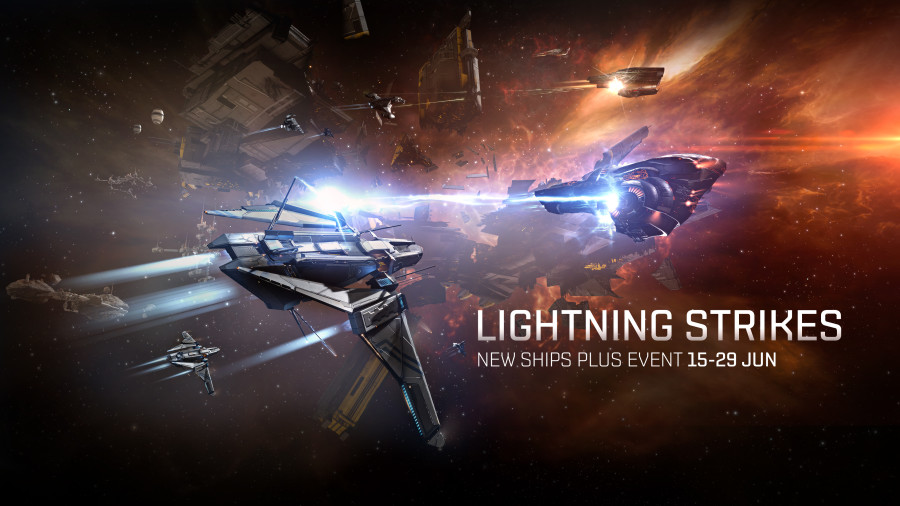 The Gathering Storm and Lightning Strikes events are imminent! With them come a series of daily login rewards, an in-game event, as well as three thrilling new EDENCOM ships featuring electrifying new Upwell technology. The excitement will begin on 9 June at 11:00 UTC with the Gathering Storm daily login rewards which end at 11:00 UTC on 15 June, leading straight into Lightning Strikes. Read on for more details.

You will receive free rewards during the Gathering Storm event for logging in to EVE Online daily between 11:00 UTC on 9 June and 11:00 UTC on 15 June. Building anticipation and helping you to prepare for the new upcoming EDENCOM ships featuring Upwell technology, the Gathering Storm login rewards will include thousands of Skill Points and Booster Gift Boxes. Capsuleers in Omega Clone State will get those rewards, as well as the skills necessary for piloting the new EDENCOM ships and their brand new Arcing Vorton Projector weapons!

You will need to log in on at least 5 days throughout the Gathering Storm event in order to get all the rewards.

To coincide with the end of Gathering Storm and the release of the new EDENCOM ship line, the Lightning Strikes event will run from 11:00 UTC on 15 June to 11:00 UTC on 29 June.

With secret Upwell Covert Research Facilities in lowsec and parts of nullsec having come under attack and been destroyed by Rogue Drones, Capsuleers can enter the sites and face off against the Rogue Drones, looting the Upwell tech from the wreckage.

In addition, each event site offers the chance of spawning a rare escalation that can be investigated for additional rewards.

The Gathering Storm and Lightning Strikes events provide the perfect launch for EDENCOM's new line of ships, built exclusively for them by Upwell to aid in the fight against the Triglavian Collective.

The new EDENCOM Skybreaker (Frigate), Stormbringer (Cruiser) and Thunderchild (Battleship) will belong to their own EDENCOM ship tree and be equipped to carry a brand new ship weapon called the Arcing Vorton Projector, based on Upwell's technology for the chain lightning-style superweapon found on Keepstar structures.

Make sure to log in daily and stock up on Skill Points, as well as getting a head start on training the necessary skills to pilot these awesome new ships, and wield their fearsome new weapons!