I remember trails in EVE. A long time ago we really had them. In my memory they were cool. And beautiful. So I installed Empyrean Age again and played a little bit on one of our reference servers, “Classic client” of course. And it was then I realized that the old trails were actually really cool, but not exactly what I would call beautiful. Take a look, does this bring back memories? 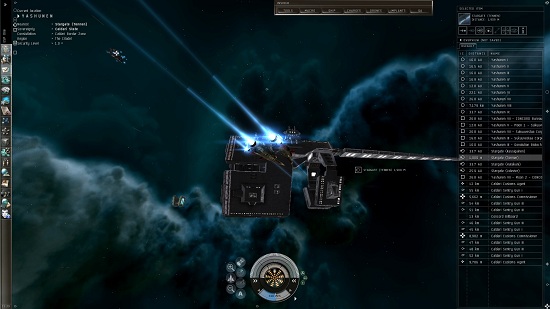 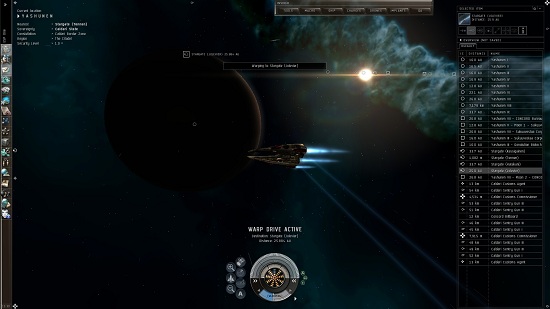 So last summer, when the office was really quiet and I had some time, I started thinking about trails in EVE again: why they were removed a while ago in Apocrypha, how I could bring them back, and most important…how to make them look better and render faster.

Splines to the rescue!

From the beginning it was pretty clear we should use splines for the new trails. They give you some nice smooth curves and are positioned only by a couple of control points and normals. And their math is simple enough to be done in a vertex shader, so no need to update a vertexbuffer every single frame for every single ship in the scene. By the way, that was how the old trails did it.

See for yourself how simple cubic hermite splines are:

Now I knew how to generate a smooth curve, but certainly not what actual geometry would be bent by it. Single billboards? Star-shaped planes? Or a chain of particles? To be honest I had no idea and I think I pretty much tried it all. Here are some of the more promising looking results: 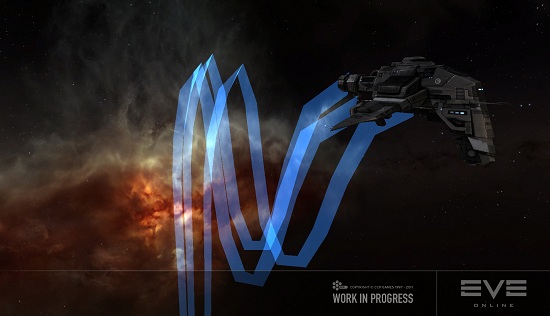 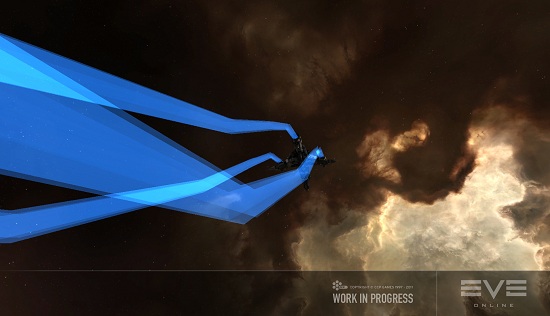 As you can see: not very beautiful. Definitely they render faster than the old ones, but they look like you would want to immediately turn them off in the options menu.

So obviously any form of solid geometry will break or look ugly if bent and viewed from certain angles. So now I knew how not to do it. At that point you usually should take a big step back and start thinking about what it is you want to achieve: drawing a smoothly bent cylinder, (because that’s what a trail basically is) a glowing cylinder. And then I had an idea: why not solve it with ray tracing in the pixel shader? At first this sounds a little bit crazy, but when you look at the math it’s not that difficult. Intersecting a ray with a finite cylinder is certainly doable in a shader and given a fairly high number of those finite cylinders per trail the result is going to be a smoothly bent cylinder.

The math for intersecting a view ray with an infinite cylinder: 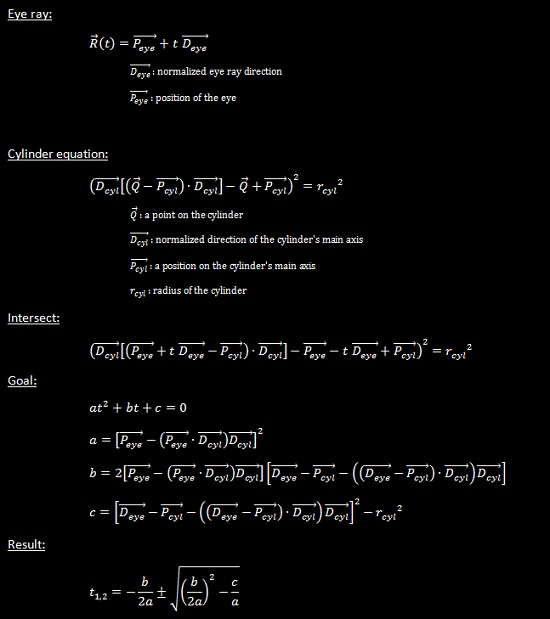 Now we need to turn this infinite cylinder into a finite one by solving two more intersections: the eye ray with both of the capping planes: 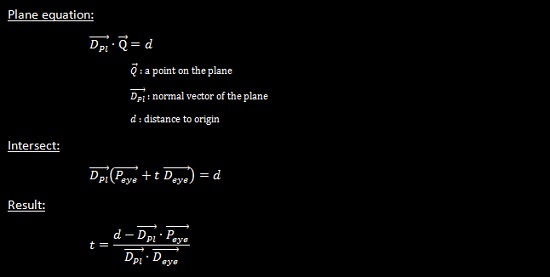 This will eventually get us the entry and exit point of the eye ray at the finite cylinder, resulting in the length of this ray inside the whole trail. It is easy to derive some color value based on that: 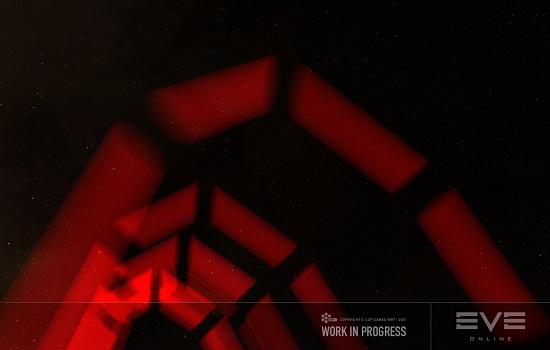 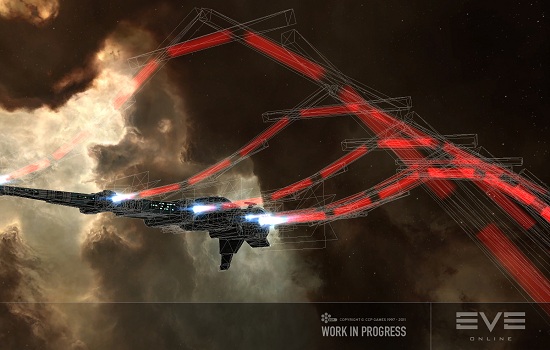 The rest is easy: close the gaps, apply some fading and let the art director play around with size, length and color: 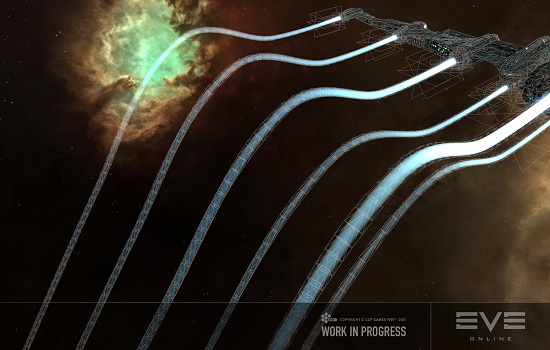 Now I knew how to render the trails, but I still had to figure out where the actual positions of all the spline control points would come from.

One reason why the old trails would sometimes get all messed up was that they relied on the exact ship’s position as dictated by the server. All MMO players know this can lead to some strange behavior of your ship’s movement, especially in lag situations. So for positioning the trails I had to ignore the absolute positions of the ship, instead relied on the smooth movement info interpolated in the client (for example the speed you see in the HUD, it never changes abruptly). If your ship is suddenly repositioned by the server, the trails now just “jump” with it! You will hardly notice. Finally, the spline control points are merely the position offsets from your ship to where it has been before. Thus, the faster the ship, the longer the trails.

All this came together just in time to be released in Crucible, so I really hope that you will enjoy the new trails. I know I do, because now they are as good as I remember them. 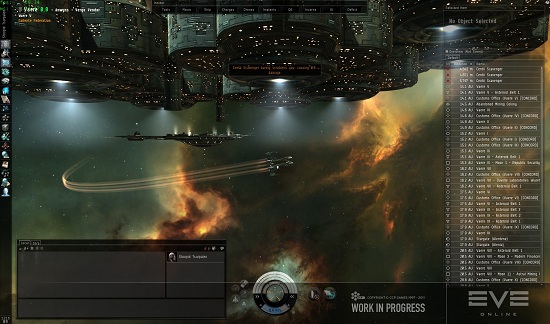 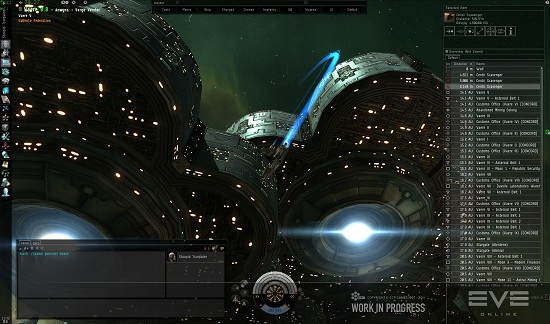 Of course there is always more. Some animation on the trails, adding light absorption, refraction, etc. I would like to spend more time on the trails, so if you guys  appreciate the new trails I might get the time I need to do all of this…