Sick in the Back of an Astra: a Travel Blog | EVE Online

Sick in the Back of an Astra: a Travel Blog

Never get carsick in a contraflow

A story about scanning

So, I'm unloading the goods at the Fed Freight station in Rancer - Jimmy came through nicely again, no hassle with cops or customs - when this geezer comes up to me and asks if I'm the owner of the Heron in bay 8B. That's where the Stork's parked, so I says, yeah, that's my boat, what of it? And it turns out that he's some science type or something, and he's dead keen to have a look at one of those wormhole things what've been showing up all over space in the last few days, since that nasty business on the 10th.

Now normally that's not my sort of thing, but it turns out he's got a fat pile of research funds to burn, enough to get the old Stork a new paintjob and some new gubbins, and I can work probes in my sleep some days it seems, so it sounds like an easy way to make a nice pile of cash for myself. So I says sure, I can take you out to have a look, hop on board, and pay half upfront, of course. This is a business, y'know? 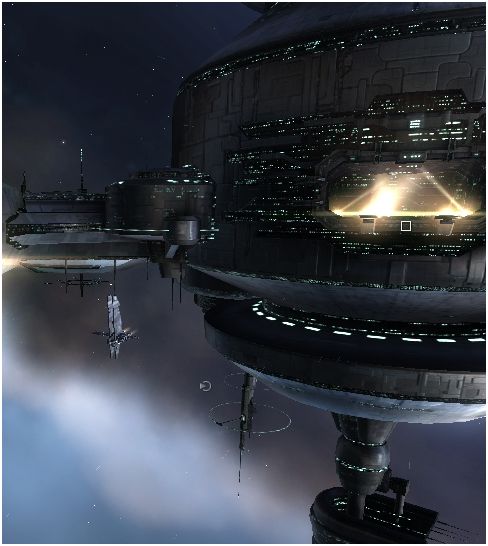 Anyway, after getting on and getting started up and getting shipped out, we're finally out in space, and I get to work. The old guys's a curious coot, wants to see how everything works, and seeing as how he's paying plenty, I decide to humor the guy.

We take a quick hop to Planet VI, and then I gets to work. I fires up the scanner interface, and flicks on the system map. 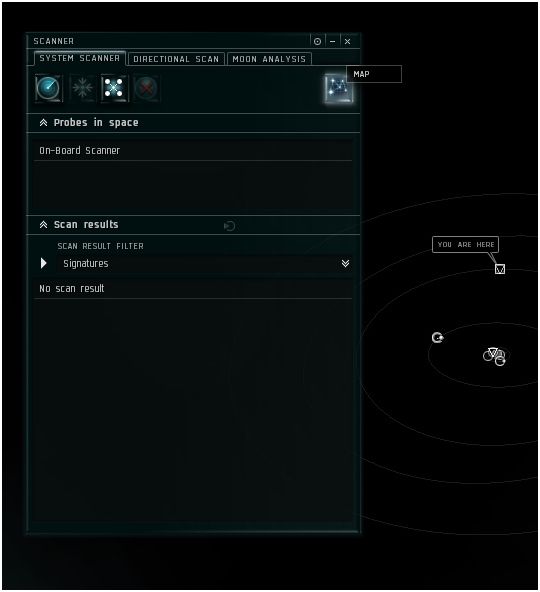 First thing to do is a general overview of the system, so I pop out a Core Scanner Probe and push it up to its maximum size. 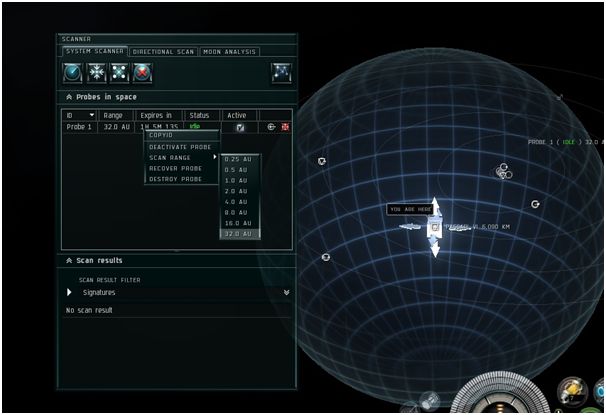 Plan is to do a quick scan of the whole system, but we're not perfectly placed here, so I push the probe over to the middle of the system. 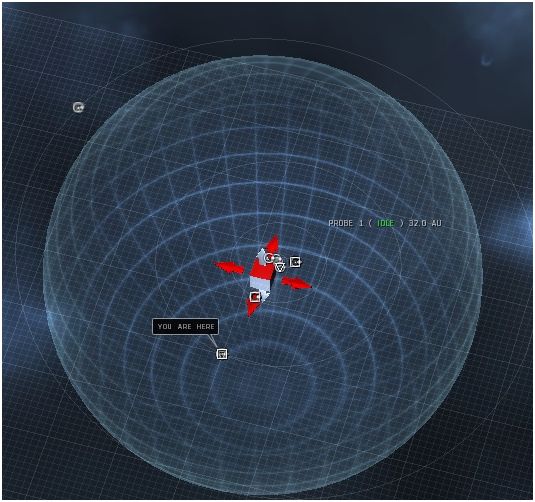 Once I got it nicely sat, I punch the "Analyze" control and wait for the probe to shuffle itself over to where I want it and run a scan. 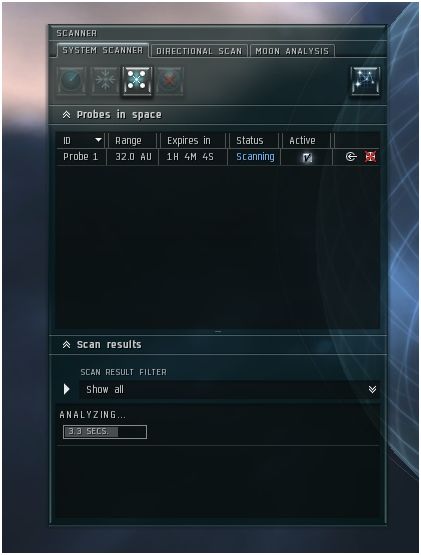 This gets me a weak little signal right close in by the probe, with a nice tight little sphere plotted out to the range where the probe thinks it might be.

I has a go at close range but it seems the first reading was pretty far off target - not surprising given how big and weak I had it set at. Running at 8AU gets me a better result though. 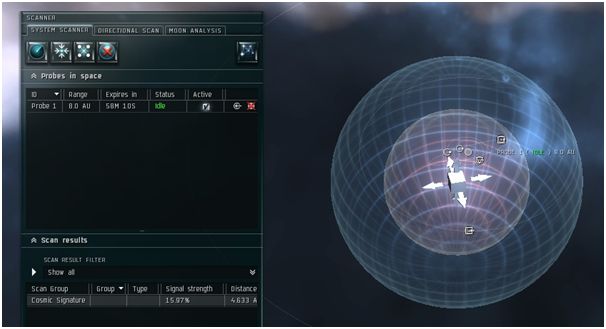 At this point I pop out a couple more probes. The old guy asks what's up, so I explain to him that if you wanna find stuff in space, you gotta use geometry and stuff. Probes only know how far away they think the thing is (and the bigger you set them, the worse they are at guessing distances), so you need several to figure out where the actual thing is.

So out go two and three, and I sets them up in a nice triangle to start with and lets them run. 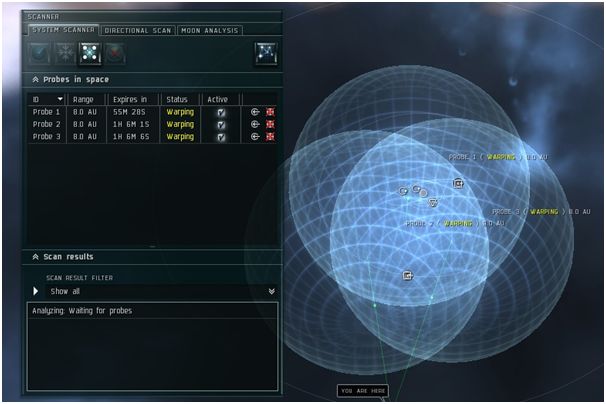 This gets me a nice circular result where two probes have both got a range on the same thing. Looks like Probe 1 is missing out though. 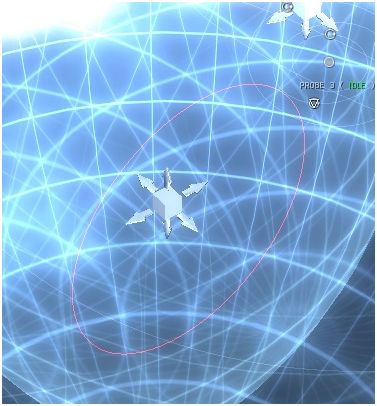 I shift-moves all the probes so they're better round the circle, shrink them down and move them in a bit, and run again. 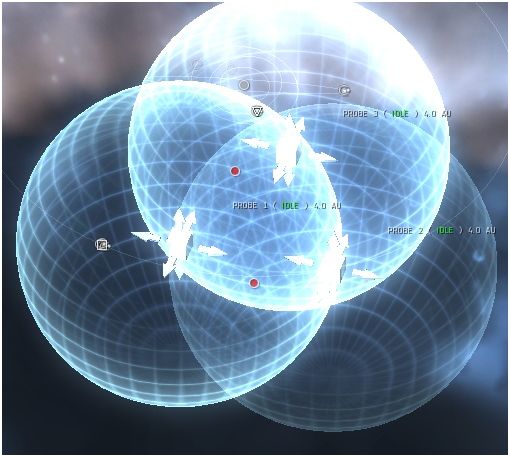 This time I gets back two point results. That's because I'm only using the three probes, so they don't know what they're seeing is above them or below them. Geometry, right? Probe four goes out to solve the problem.

Sticking number 4 up top still gives two hits, so I sticks it down underneath instead.

There we goes, single point hit. Now all we gotta do is get in close to pump that signal return right up and get a properly accurate result. Because we still got a result at around 20% strength, that dot's near where the site is but not quite there - the probes still don't know exactly where the thing is yet.

So I works them in - step down a size, move in, step down, move in - until I gets a perfect hit.

That done, all we gotta do is warp there and take a look-see... 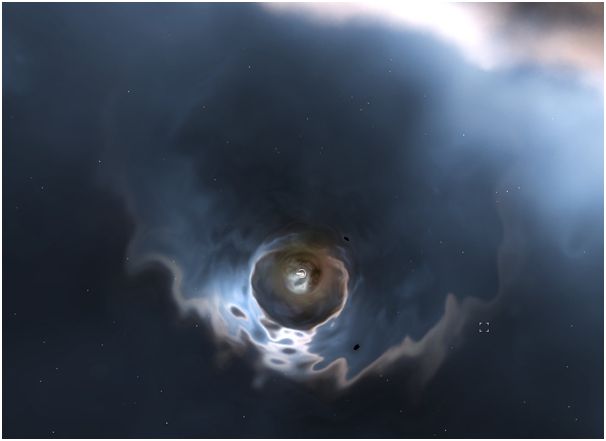 We've been sitting here lookin' at the thing for a couple of hours now, and the old guy's been takin' lotsa readings and stuff and getting' all excited. Now he says he'll pay me double if we go inside, jus' for a bit... Of course I know he ain't gonna be happy about jus' havin' a look-see, he'll want ta poke around, but hell, the money's good, and I am kinda curious too... I've recovered my probes to be sure I don't run out, we should be ok with what I've got with me. I'm wrapping up this log entry and sending it back, so as if we don't come back my kids know where their da went. You gotta go look, right?

What happens to the Rusty Stork and her intrepid captain? I'd tell you to tune in next week to find out, but I think it's nicer if I don't tell you. You decide for yourself - does he nip in and out and get back to his kids the next evening, or does a nasty Sleeper gobble him up and leave the Stork nothing but a pile of salvage? I think he's toast, personally, but I could be wrong... maybe...

Other things of interest

On probes and launchers:

On skills, implants and rigs:

This is all because under the new system, strength is very important while duration is much less important. As a result we swapped those two bonuses around for the most part, so things which used to be the most useful are still the most useful.

On the System Scanner Array:

This structure doesn't fit into the new quadrilateration system as it's only one location. While there are ways we could make it work, a check on TQ suggests that it's very rarely used so we decided the coding time for overhauling it would be better used making the rest of the system more awesome.

Instead, we flipped the sell orders over to buy orders. This means that the prices are exactly equivalent to what they've been selling for, less any downward trends caused by orders being filled. We updated the descriptions to tell you where to sell them, in case you've forgotten. We realize that this requires a bit of hauling work to cash them out again, but given the years of service they've given, buying them back at near-new prices seems like a good enough deal to counterbalance that.

I think that pretty much covers the new probing system and related changes. There's  some things not explicitly mentioned or explained above - you can now destroy or recover some or all of your probes, depending on which button you press. You can also reconnect to probes if you disconnect, jump out or whatever, provided they haven't expired. There's also a filtering system very like overview filtering, which shouldn't be too hard to figure out.

The directional scanner and moon scanner haven't been changed yet, although we'd like to have another stab at the former as part of a general "intel tools" revisit in the nearish future, which should include a revisit of PvP probing once you've had a chance to get used to the new system. Oh, and we removed the transitions between map views, so it's now completely instantaneous.

If there's anything else you want to know, I suggest hopping onto Singularity, our test server, and having a play with it yourself. We'll be watching feedback here, in Game Development and elsewhere, with an eye to tuning things post-release, so feel free to share any thoughts you have.

Other than that, happy hunting!