Singularity 'The Rules They Are A-Changin'

My name is CCP Oneiromancer - Minion Mistress, lolcat enthusiast, crowbar owner, also known as “scary lady”. Part of my responsibilities as QA Lead for EVE is player support and supervision on the test server, Singularity.

Enforcing rules on Singularity has become an increasingly difficult and time-consuming task in the last few months as the increase in the number of players using the test server has led to an increase in incidents. This leads to a bad experience for you, the players, and to less time spent on work-related tasks by QA and the bug hunters. As a result, and after much discussion within the QA department and with the bug hunter leads, last week we’ve sat down and drawn up a new set of rules for the public test server, alongside other changes that I will discuss in this devblog. These changes will come into effect with the deployment of the next Tranquility mirror, which will happen next week.

There were a few rules that we set for ourselves when coming up with this set of changes:

• Monitoring and enforcing test server rules should create less overhead for QA and BHs, not more. Both groups have a lot of quality-related work where their time would be much better spent.

• We should strive to make Singularity more like Tranquility, not less. This is because Singularity is primarily a test bed for what eventually is deployed on Tranquility, so conditions on the test server should be as close as possible to the live server.

• We should try to maintain a good user experience for the people using the test server in good faith.

One of the first and most important changes is that we will be relocating the main combat testing system out of FD-MLJ. The new location will most likely be 6-CZ49, as the station there has cloning and repair facilities; it is 2 jumps from Empire space and has a large number of moons.

Podding is no longer disallowed, so keep your clone up to date. Keep in mind that repeated and intentional podding without consent still falls under interfering with testing, so you can still be banned if you abuse this.

Claiming sovereignty in a system already claimed by another alliance is classed as griefing, disrupting of the test server and non-consensual combat.

Starbases and station services are included in the "No non-consensual combat" rule. This means that you are not allowed to attack a starbase, starbase modules or station services that belong to someone else without their express permission. This rule does not apply in the main combat system.

If a player gains ownership of a conquerable station or outpost he/she must NOT restrict access to that station and the station services in any way.

Another change that we will be making concerns the beacons in the main combat system. We will remove the BF beacons and turn the FFA beacons into guideline beacons for ship class. This means that the entire system will be FFA with the exception of the station and gates and players are not restricted by ship class at beacons. We would like to see more diverse engagements on the test server and if someone is being a jerk, the other players are allowed and encouraged to visit some righteous justice on whoever is disrupting their testing. If people are seeking more orderly engagements, like duels or specific ship-class fights, they can arrange that in an out of the way spot in the main combat system or in neighbouring systems.

CCP QA will still monitor and enforce these rules on Singularity. And since right now there is a multitude of channels through which people report trespasses, I will take a moment to talk about this.

• Petitions: Customer Support does not cover the test server, which means that petitions created by players on the test server are not being read. (This does not mean that the petition system is not tested.) 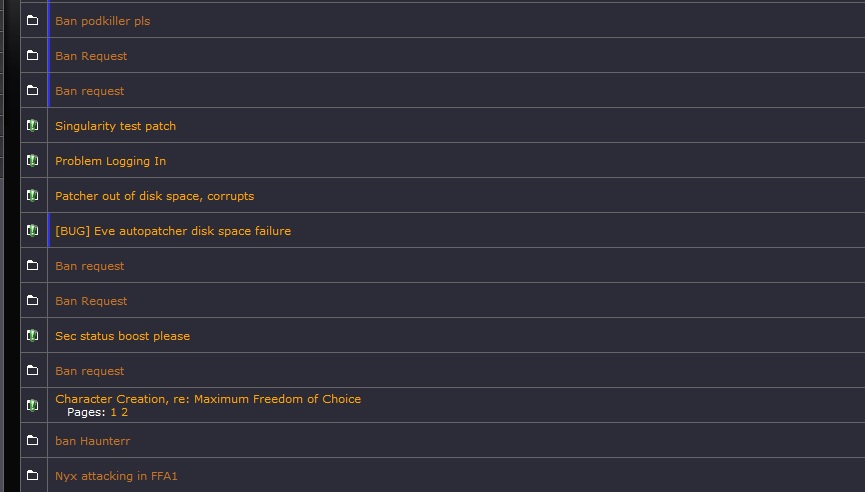 This is not something that we want to see in the future on the Test Server Feedback forum. It has been suggested before that we create a sticky thread for this purpose and that is what we will do: we will provide one place for players to submit their reports, together with a format to help us investigate these reports in an efficient manner.

• Directly contacting CCP staff: This is something that we would like to discourage, as in most cases the CCP staff present on Singularity have some task or job to do and being poked about this or that space villain is not very conducive of productivity with said job or task. This also goes for EVE-mail or IRC contact. However, if urgent action is required from QA staff, direct contact is acceptable.

• Directly contacting BHs: This is acceptable as long as it doesn’t interfere with their primary tasks or if it’s something of a serious nature. We would prefer that you use the reporting forum thread though.

If you are one of the people who find tears delicious, take moment to consider some other changes that we will be making. Permanent bans (the kind that are refreshed with every mirror) will no longer be removed on request. If you manage to nail yourself a permaban, most likely through very persistent douchebaggery, you can kiss Singularity good-bye. And yes, we will ban your alt accounts as well.

In closing, we would like to remind everyone that Singularity’s primary role is for testing new features, changes and fixes, in an environment as close as possible to Tranquility. If you have any ideas or suggestions on how we can improve on this with minimal overhead for CCP and ISD staff, please post them in the comments thread for this devblog.