Ola chillbros and other bros!

As a part of trying to educate and make the devs at CCP even smarter, most of the EVE devs had a course in some basic (and not so basic) SQL by our own database gurus CCP Prism X and CCP Creber Cattus.

To put what we learned to good use, we then had a hack day. On hack day we could do kind of what ever we wanted to use our new knowledge and get to know SQL better.

Since Team Super Friends are Super Friendly and cool, (and humble), we decided to gather some data and write a stats dev blog on bounties. Mostly because we know you guys love that, and graphs! There will also be some name dropping, because I like that. So we wondered and wondered and asked around what kind of information you would like to see and then built all this into a dev blog. This dev blog.

In Retribution we gave the bounty system a complete overhaul so we found it very interesting for us to dig a bit into the data.

Note that all these numbers are from January 18th 2013.

So if we start with some basic numbers.

And some less basic numbers.

Some people were worried (or not worried) about EVERYBODY in New Eden ending up with a bounty on them. So we did some research on that.

Characters on active accounts with personal bounties on them
2.9%

Characters on active accounts with any bounty on them
3.4%

Characters that have logged in within the last 7 days with personal bounties on them
11.7%

Characters that have logged in within the last 7 days with any bounty on them
13.3%

Here are some graphs 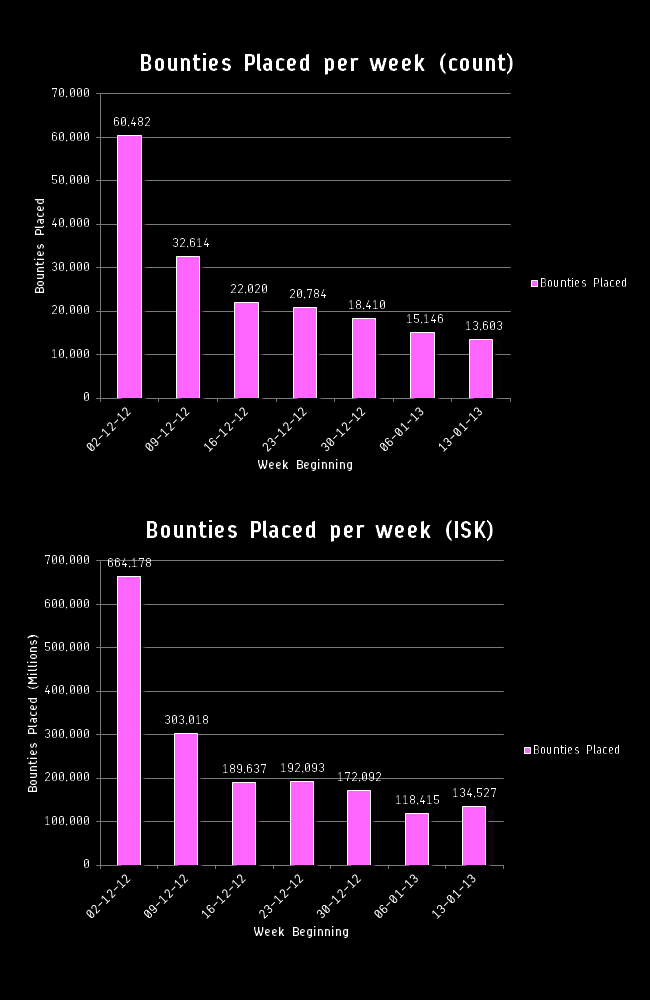 As you can see most bounties are placed when the feature is fresh and new, as expected, but it's now stabilizing and is still being used by a lot of people.

Unsurprisingly, bounties are mostly being claimed in null and low security space.

What we got from this is we're pretty happy with our feature. Seeing that almost 30% of placed bounties have been paid out, it tells us people are using the new bounties and our feeling is that people are also having fun with it.

CCP Zulu was also curious about how many bounties we ate during development. It's one of the few things we didn't log, which is probably a good thing. I can at least tell you there are no longer Bounty bars in the vending machine.

While playing with all these things we also figured out a bunch of other metrics we would like to show you guys. We didn't have time for it all now but here are a few ideas we might throw around later:

But we'll see about that! We hope you enjoyed our little experiment, I know we learned a lot from it and had fun with it.