The ALL CAPS Ship Blog

Over the past few months capital ships have been through quite a few changes.  This blog aims to bring all of that under one umbrella and explain where things are headed in Dominion 1.1.

Here is a nice shot of some Fighter Bombers on patrol over a lush and prosperous Minmatar Retirement world: 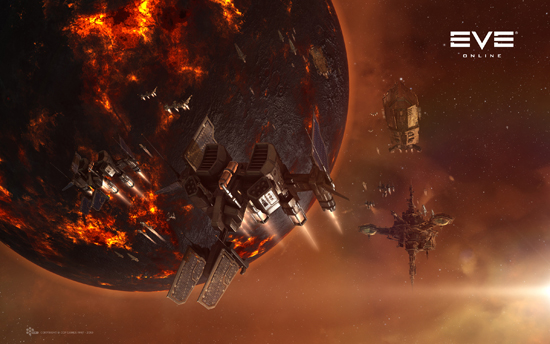 Seeing as how these ships are now all about killing things, we've removed their ability to fit the Triage Module as well as their capability to use Clone Vat Bays. The removal of the Clone Vat Bay components will also reduce the construction costs of these ships slightly.

There are still a few ideas on the drawing board for these beasts, but for now we look forward to seeing them dusted off and causing many tears.

Since Dominion, it's been good to see Titans coming out of the force fields and being used as more than a mobile stargate or giant smart bombs.  Since everyone likes data, I asked CCP Diagoras to do some work and here is some interesting stuff:

The doomsday change from an area of effect weapon to a single target weapon is obvious in that entire grids of ships are no longer being wiped out.  What is more interesting though are the types of ships being killed:

So, to help things further along, we've made some adjustments to the Ragnarok & Leviathan to ensure all the titans are doing similar levels of damage, which they currently are not.

Dreadnoughts are staying pretty much the same except for the Naglfar which we're returning to the turret-based bonuses (5% Damage & 5% Rate of Fire per level) implemented back in Apocrypha 1.3.  Combined with the projectile ammo changes introduced in Dominion, this should make the Naglfar less horizontal.

We have changed the signature radius on all Control Towers and POS structures to a minimum signature radius of 2000.  This is so that all capital weapons are capable of doing full damage to their intended targets.

Dreadnoughts will receive their own signature radius bump, a 75% increase, which puts them in the same range as other capital ships.

We have added a mass multiplier (x10) to Siege Modules, Triage Modules and Industrial Cores. When these modules are activated, the mass of your ship increases exponentially, making it much harder for other ships to move or bump.

To make the Triage Module a bit more tactically useful, we have reduced its duration and fuel consumption by half.

XL turrets have been adjusted slightly to ensure their damage is balanced and to give the short range weapons a bit more range.

We've also changed several things with the Citadel Torps / Missiles in order to balance these weapons with their turret counterparts.  Their new explosion radius', along with the aforementioned signature radius increases, should ensure they are doing the damage they are supposed to.

We are also adding faction Citadel Cruise Missiles as well. They will receive the same 10% damage bonus that the current faction citadel torpedoes receive.

Hopefully these changes will go a long way toward enhancing your billion-ISK ship experiences.  We're always watching to see what changes and improvements can be made so please continue to provide constructive feedback. I'll now leave you with one of my favorite charts: