The Nation strikes back

It is another routine day in your friendly New Eden neighborhood: some capsuleers are gazing at the exciting, humming glow of strip miners with a blank, almost lifeless stare; others are playing carousels with their ships inside stations; the rest are merrily shooting each other in the face while exchanging strange remarks about their sisters in local chat.

Suddenly, all this buzzing activity comes to a stop. Something feels amiss, like a half-eaten Roquefort cheese left too long on the kitchen table. Blockades appear on star gates, asteroid belts are invaded, and even the ambient nebula light has shifts to a pernicious shade. For those inside stations, sirens go off while a constellation wide emergency is declared: an incursion has begun.

We brake for nobody

Incursions may happen anywhere, at any time, from null-sec alliance space to high-sec travel routes. The Sansha's Nation is seriously pissed and doesn't care about politics; trust us, you would be quite mad as well if you were stuck living with giant spikes on your head ‘n' shoulders.

Active incursions will bring a variety of disruptive changes that will greatly impact player activities; first off, celestial pirate NPCs you would normally encounter at star gates and asteroid belts will be replaced by new ones tied with the incursion, and they will demonstrate updated attributes and Sleeper-like AI. Note, however, that this will not affect CONCORD, or the empire navies, even if an incursion will suppress custom NPCs.

In addition, systems invaded by Sanshas will receive certain system wide effects that affect all players inside them:

·         Reduction of all shield/armor resistances

·         Jamming of cynosural fields throughout the system

The purpose of such modifications is to provide a dynamic, opportunity-rich environment that breaks the routine and offers new possibilities. Capital ships won't be able to jump in low and null-security space, leveling the fields between small corporations and organized alliances; gate camps discourage players to block traffic there, and instead motivate them to look for prey inside the incursion sites themselves, where they also can be shot by the NPCs; NPC bounty reductions provides an incentive for players to gather arms, team up, and face the threat.

Countering the Sansha offensive and thus removing the negative effects is achieved through the control of influence. It reduces the penalties to ship resistances, damage and when sufficient influence is achieved, the final boss will appear.

Influence is gained by completing sites. Sites are sorted into three levels, which dictate the magnitude of the Sansha strike force occupying the system they are in:

There is also one system per incursion designated as a "staging area," aimed for new players and designed as the main place for pilots to gather up before heading into the more difficult areas. This will be shown in the in-flight UI and star map.

So what's the point in completing more difficult sites? Not only do they give more rewards, but also net more influence, which is the key at successfully repelling the invasion, since Sansha forces will continuously attempt to push influence downwards overtime. Thus, incursions always are an ongoing struggle, a fluctuating frontline that needs to be maintained because its collapse resets system effects back to their highest values.

Below are some screenshots of the new incursion in-flight and journal tools. Please note this is still work in progress, as our UI developers are relentlessly fine-tuning on it as we speak: 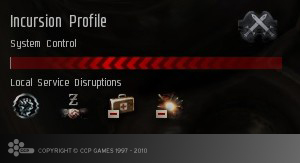 The in-flight profile appears in incursion infested systems, and displays Sansha (red) versus player (blue) influence through the main gauge. The system occupation level is indicated by the bronze/silver/gold Sansha tags, while system effects are displayed on the bottom part. UI elements can be hovered over with the mouse for more information. 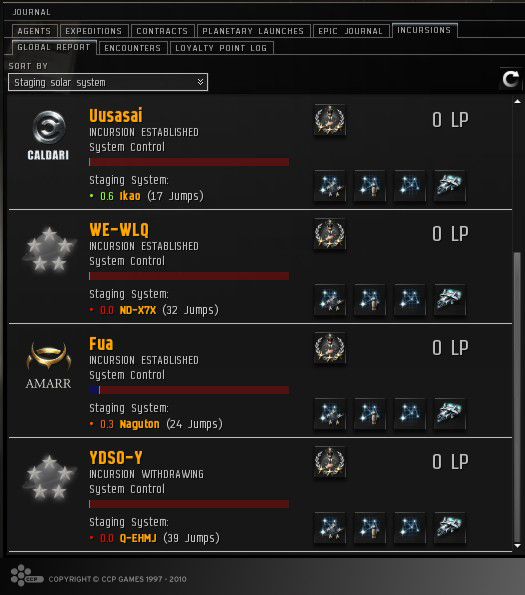 The journal report is aimed to locate active incursions and facilitate grouping. It shows which original faction/alliance controls the affected area, the exact infested constellation/staging system location, time remaining before expiration and distance in jumps to the affected systems. It also provides map filters to identify corporation members, contacts with positive standings and display loyalty points earned and that may be granted if the final boss is defeated.

Show me the money

Participation in incursions grants rewards, of course. Completing sites will secure ISK and CONCORD loyalty points, the latter actually paid out only when an incursion has been successfully repelled by the destruction of its final boss (thus making it particularly important). CONCORD only pays for a job that's finished, private.

Please also note that, - besides the fact that attempting to solo an incursion is a very, very bad idea - the rewards themselves are designed for groups and based on site objectives. The NPCs themselves have no bounty, no loot, and very little salvage as we wanted players to focus on the actual encounters. Site rewards are paid as follows:

·         To actual combat ships: no pods, shuttles or cloaked vessels

·         To players in the fleet that participated the most in the site in question; if there is more than one fleet in a site, others won't be paid. CONCORD only rewards the most effective capsuleers. If you are not ready to face the competition, we recommend you either merge your fleets together, or spread out to other unchecked sites.

·         Depending on the player numbers in the most contributing fleet. A ratio is calculated from the total number of active fleet players in the site and how many players this site is from. The closer, the better.

ISK and loyalty points granted per site will be made apparent in the journal so players know what to expect and can make rational decisions before engaging themselves in the content.

Here is an example of the mechanics explained above; site briefing and main objectives are listed under the encounters tab, while the reward is affected by a ratio depending on player count and security status location.

Loyalty points gained in incursions can be spent to buy named capital module blueprint copies and new implant variations from any CONCORD store. Alternatively, they can also be changed into any empire corporation loyalty point, at a certain exchange rate. Pirate corporations are excluded, however.

Finally, the last Sansha boss in each incursion will also drop Sansha sub-capital ship blueprint copies as well as some other goodies. In low-security space (and only there), there will also be a chance of receiving a blueprint copy of the boss ship type itself, the Sansha supercarrier.

Adding more sand in the box, one grain at a time

Of course, all of the above is absolutely open for anybody to participate. No matter where or when an incursion occurs, there will be no player number restrictions, (although there are some mandated ship class requirements on certain sites).

That means you will be totally free to engage each other at will in circumstances that would normally allow it, or to tackle an incursion as you see fit. Be careful however, as NPCs do not know discrimination: they most likely will change targets to any newcomers, so plunder these sites for juicy player targets at your own risk.

Speaking of the NPCs, while we adopted a "wolf pack" approach for the Sleepers in Apocrypha, we chose to create very specialized units for this feature, inspired from players setups. We also improved the Sleeper AI to match their new capabilities. As such you will face NPC equivalent of logistics, stealth bombers, remote spider-repairing battleships, interceptors, command ships, EW platforms, and more.

So be prepared: Incursions are full war assaults, treat them as such.