Retribution brought 5 new ships, the Venture mining frigate and the 4 destroyers; Algos, Corax, Dragoon and Talwar.  From December 4 to the end of the year, 107,273 blueprints were sold for the new ships. The trade value was 848 billion ISK. As the following figures shows, the Venture was the most popular. 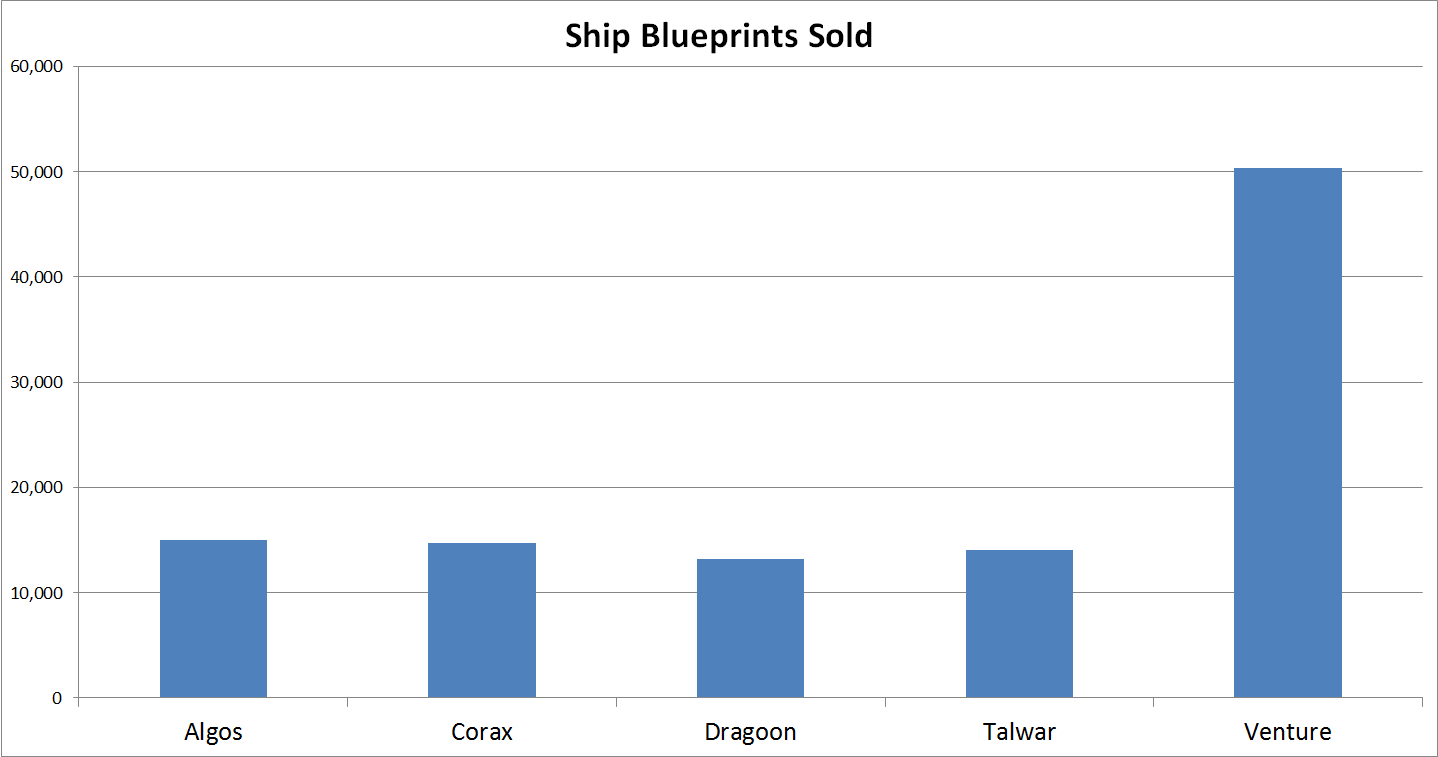 The following table shows kills and losses of these ships in PvP in December.

Number of Ships Destroyed in PvP

Number of Ships Destroyed by NPCs

Final Blows in PvP Made by Ship Type

The Algos and Corax are clearly far more popular in PvP than the Dragoon and Talwar, accounting for about 2.5 times more kills and losses.  The new destroyers made 2.8% of the PvP kills between December 4 and December 31, while being victims themselves in 4.8% of the cases.  Interestingly, the Venture mining frigate scored 298 kills in the period.  Kills of rookie ships and shuttles are not included in these numbers.  Venture losses in PvP were a whopping 13,873 ships, which means that one in every 21 ships lost to PvP was a Venture. 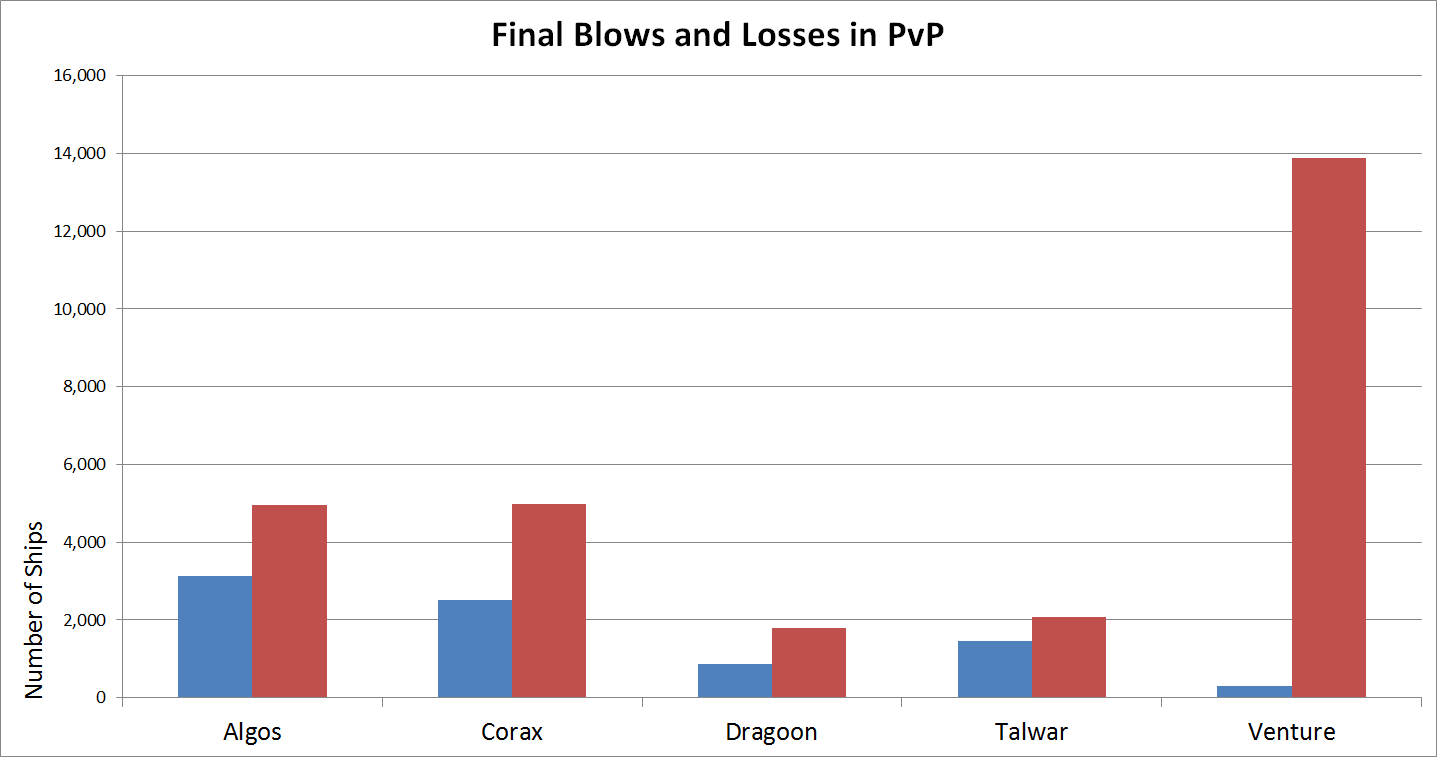 The high count of Ventures killed suggests that it is in considerable use.  The table below shows the relative quantities mined or harvested per ship type.

The Venture has a decent share of the high-security ores, although Hulks, Mackinaws and Retrievers clearly dominate.  However, the Venture isn‘t just a mining ship.  It‘s the only ship with a gas harvesting specialty.  It gets a 100% role bonus to harvested quantity and 5% reduction in harvesting cycle time per level of the Mining Frigate skill.  As a result, the Venture has taken over a large part of gas harvesting.  From December 4 to January 21, it harvested 82% of Mykoserocin gases, found in high-security space, half of the Cytoserocin gases in low-security space and 73% of the fullerites harvested in wormhole space.

The effect on the total quantity of harvested gas is interesting. 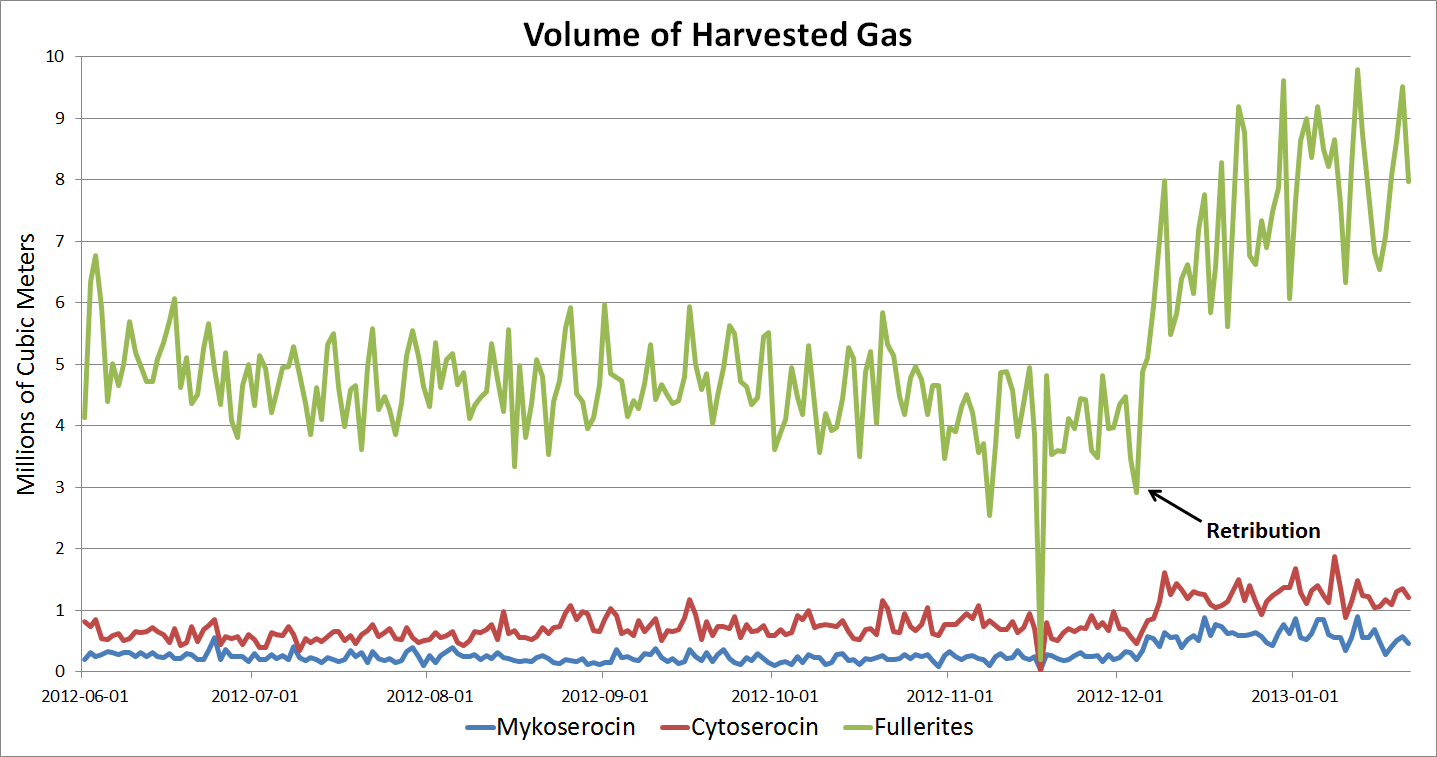 In the 49 days from December 4 to January 21, harvested volume of mykoserocin gases was 150% higher than in the previous 49 days.  The growth for, cytoserocin gases was 64% and, most importantly,  fullerite harvesting grew by 76%.  The average prices of fullerite gas fell by 9% from November to December and are likely to fall further.

The index values for December are:

Other price changes from November to December were a 3% rise in the Mineral Price Index, mainly driven by Isogen.  This is lower December inflation in mineral prices than in the previous two years, as prices had already inflated by 8% in November, probably due to the market foreseeing the development.  The Primary Producer Price Index barely moved in the period, with the only development of note being a continued fall in datacore prices.  Salvaged materials were the main driver in the 4.8% inflation of the Secondary Producer Price Index, which in turn was driven by increased demand for rigs.  Finally, the Consumer Price Index rose by 2.9%.  The most prominent factors there were Tech I ships and rigs, which stems from increased demand, and a continued rise in implant prices, following changes to loyalty point payouts from Factional Warfare.

The introduction of new ships always sparks considerable initial interest and Retribution was no exception in that regard.  Hundreds of billions were spent on blueprints and manufactured ships.  The destroyers add some diversity to range of lower-end combat ships, while the Venture is more of a game changer, especially in gas harvesting.  The following months should see the inflation that Retribution spurred die down slowly.