Those That Came Before Us: Tyrannis Landmark Updates

Note: This dev blog is a translation of magic runes found on obsidian tablets. These tablets were found in a hollow beneath Stone Mountain in Georgia, along with a cistern filled with intoxicating liquids and a funeral pyre decorated with goblin bones.

My name is CCP Bettik and this is my first dev blog. Given my aversion to writing lengthy texts, this endeavour may seem somewhat miraculous. I am sure that my paltry attempt at documenting my work will go quite unnoticed in the annals of time. However, this is not to say that EVE will be forgotten. On the contrary, I believe that EVE will be discussed long after my time, and I hold that belief with the utmost joy.

It seemed absurd seven years ago that a company of space monkeys managed to create something so unique and beautiful. To this day, that company is still breaking new ground in its field. For this I am eternally grateful.

Now, enough sentimentality; let us proceed with the lengthy text!

Issue: Planets were made more appealing, other objects went missing

A self-contained stretch of space containing objects and/or NPC's. These can be spawned into solar systems as a single entity as opposed to spawning each object and/or NPC individually.

Currently I am working in the CCP North America office, but during my time working on Dominion I had the privilege of being sent to my home country of Iceland for a few weeks. One week prior to finishing my work on Dominion, while preparing my return to the dirty south, I received word from my good friend, CCP Explorer.

CCP Explorer: "What should we do about some objects that used to be visible around planets in EVE? When we made the planets pretty, all of these objects got obscured."

Me: "How many objects are there?"

CCP Explorer:  "CCP Prism X has a detailed list. I'll send it to you."

Alright, I thought to myself. This will be a simple enough undertaking. All I need to do is identify the objects in question and formulate a plan as to how to best make them visible again.

I received an Excel sheet with all the information from CCP Prism X. When I opened the Excel spreadsheet that contained the detailed list, my jaw dropped to the floor.

2,238. That is the total number of objects that got obscured by the new planets, and I had to go take a look at all of them. Like, individually. The situation is certainly not improved by the fact that the objects were spawned directly into space on Tranquility instead of using the dungeon system. Keep in mind that because these were not part of our dungeon system, each "object" represented one structure or asset in space. A typical location might have had 20 or more "objects" in it.

There went my week of winding down.

The Course of Action

Over a cup of tea, we agreed on a plan. The aforementioned objects would have to be moved over to the dungeon system. The alternative would be to deprive EVE of content, thus making the vastness of space therein somewhat more vacuous than it currently is. We broke the project down into how many dungeons needed to be created and turned into static dungeons. After much figuring and calculating, we decided to turn those 2,238 objects into basic dungeons - remember, they were not part of our dungeon system before - that we could then populate out into the game ad infinitum.

And so the Content team, armed with spreadsheets, white boards, and drums of coffee, dove headfirst into the project. The space monkeys worked in overdrive to convert all of these sites to dungeons.

Sites and landmarks that used to be around planets have been changed to static sites and moved away from planets. Also, we added NPCs for you to play with.

So, how does this affect me, the average EVE player? Well, not much. Nothing in the universe has been lost, but something has been gained. In creating these sites, we wanted to breathe more life into EVE and create more content for you to fool around with, offering a deeper backstory for EVE.

You can also use these sites to hunt down your nemeses from the pirate factions and shoot them in the face. Sounds fun, right? We hope you enjoy the sites when you stumble upon them, knowing the effort it took to fill EVE with this content.

With love and respect from me, CCP Bettik and the EVE Content team.

Since the time that CCP Bettik wrote this dev blog to explain what was done and why, we have made some additions to the project.

After putting up beacons all over EVE to sites that we have dubbed "generic landmarks," we noticed that these sites were mostly concentrated in just a few regions. This seemed unfair to players who play elsewhere, so we went to work on distributing them to the rest of the EVE cluster.

We want most players to encounter these landmarks at some point, but not all the time. Thus. we decided to put them in around 15% of solar systems.

This project mostly involved copying sites, renaming them, tweaking them a little bit so they aren't all exact copies of one another, and then replacing NPC's with whatever was appropriate for each solar system.

In some regions, we had to make new landmarks entirely. Most of these sites were tied to the empire factions in some way, so they wouldn't make sense for, say, the Rogue Drone regions. Since all of the other regions were getting new content, though, we didn't want to leave the rogue drones out. So we simply created a few new ones for those regions.

In a nutshell, here is what we did: 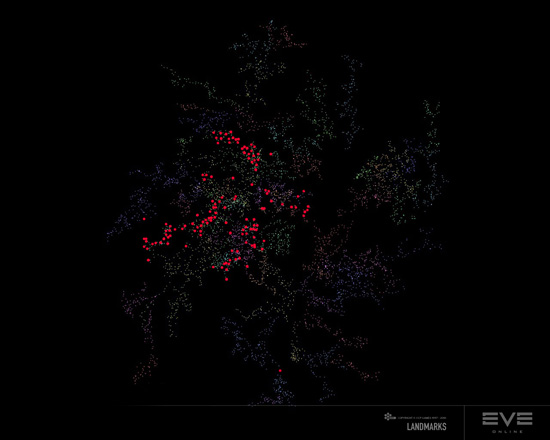 We identified all the old objects floating around space. 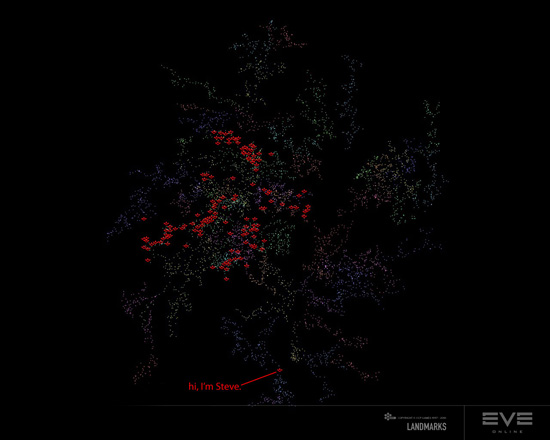 We put these items inside dungeons and put beacons in the solar systems so you can easily find and warp to the sites. 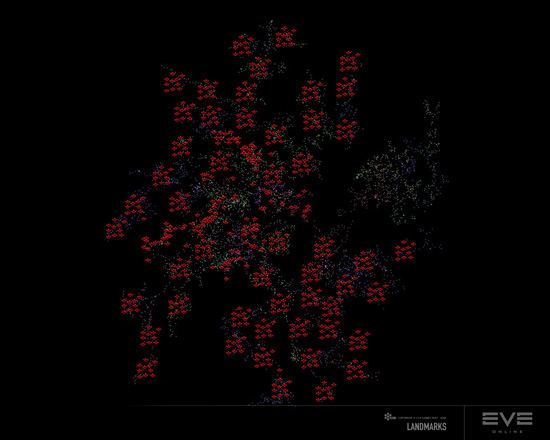 We distributed the sites to regions that did not have any such content before. (675 sites) 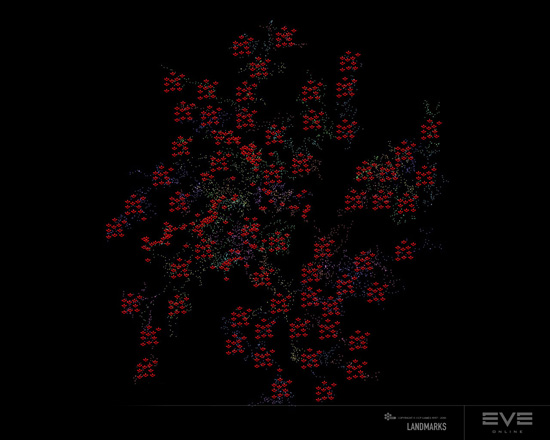 We made Rogue Drone sites for the Rogue Drone regions and distributed them throughout those regions. (675 + 78 = 753 sites total)