Hi there! I’m SoniClover from Team Super Friends, and I’m here to tell you a bit about what the team has been up to lately.

This blog is going to focus mostly on the backend and mechanical stuff. Later this week we will have another dev blog out about the ally system, with lots of cool pics. Until then, you’ll have to accept my verbal diarrhea hitting your palate instead (yes, be happy there is no pic here illustrating that).

As most of you hopefully know by now, the big ticket feature the team has been working on this release is refactoring the War system. You can see more about the thinking behind this in my earlier dev blog here, but to quickly re-iterate, we wanted to give wars a bit more structure, fix a few exploits and give players more options in conducting a war. The overall goal was to keep the war system as a tool for players to use as they see fit, rather than as dictated by CCP and to reinforce the concept that more lucrative avenues in the game (like those enjoyed by being in a player corporation) come with increased risk.

Since that dev blog, we’ve been busy iterating on the system, with a few notable changes. Let’s cover the most important ones.

The Cost of War

We’ve updated the war cost formula bit, from the ‘hey, let’s throw this in and tune it later’ version we discussed earlier.

Note that the cost is now the same when declaring on a corporation or an alliance.

Here is a graph illustrating the cost increase with the new formula. 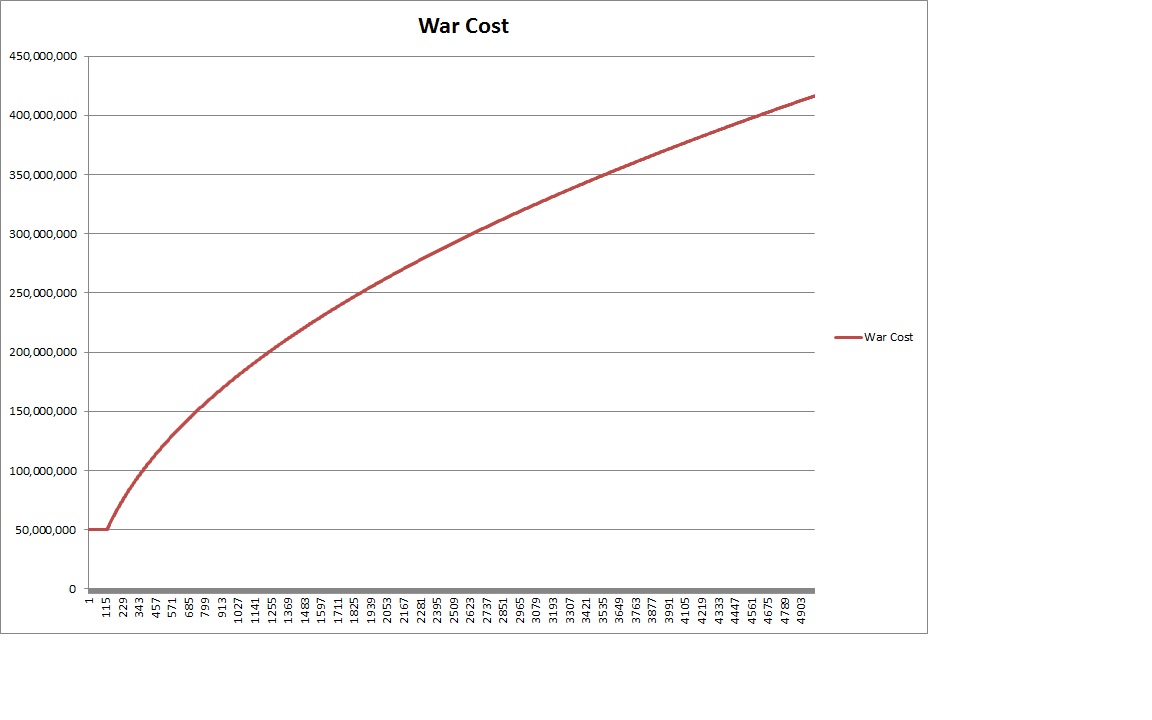 This graph shows the cost of declaring war on a corp of up to 5000 members. There is no cap, but the cost continues to taper off, breaking the 500 mill barrier at a little over 7200. Pulling out a few number as the graph is a bit hard to grog:

The Even More Cost of War

Couple of important points on the cost formula:

Trial accounts are not counted when counting corp membership. We considered extending this to inactive accounts too, but as this is a fairly low percentage overall, decided to not exclude them. Note also that members in corps/alliances allied to the defender are never counted.

As before, the number of non-mutual wars the aggressor has declared acts as a multiplier (for each war). New wars are created now when a corporation leaves an alliance (to get rid of the dec shield exploit), but these new wars are not counted as cost multiplier. As an example, Alliance A declares war on Alliance B, if 10 corporations in Alliance B leave the alliance, then a new war is created for each of these 10 corporations, but these new wars do not add a x10 cost multiplier to the war cost for Alliance A.

We’ve also implemented a good suggestion from Fanfest, which is that if you leave your corporation while it is engaged in a non-mutual war, then you will not be able to rejoin the corporation until that war ends, or until 7 days pass, whichever comes first. Note that this rule only applies for non-mutual wars – mutual wars do not prohibit players from entering or leaving corporations. The main reason for this change is to combat the popular alt corp hopping (this doesn’t stop it completely, but limits it a lot).

The Enemy of My Enemy

A final note on the war front, we tightened up the ally system (see previous dev blog for more info on ally system) a little bit by making it so that if an ally corp joins an alliance, the ally status transfers over to the alliance (i.e. the alliance becomes the ally). We also contemplated giving limits to the contract length of an ally, this is something we want to do, but didn’t have time to implement for Inferno. We’ll look into implementing this post-Inferno.

A secondary priority of Team Super Friends has been creating and modifying modules. As tends to be the case with non-primary objectives, they are susceptible to the cutting knife. We set out with a list of 12, our haul is likely going to be 7.

Adding modules is always massive fun, as it can have such wide-ranging ramification for so many existing tactics and setups.

Let’s start with what is coming in Inferno. I’m not listing any stats here, as we are still testing these and they could change. Feel free to jump on the Singularity test server and join the fun.

Reactive Armor Hardener - Low slot. Armor Hardener that adjusts its resistance based on the damage received. Only one can be fitted. Just the tech I version now, but others will follow if this turns out well.

Small/Medium/Large/X-Large Ancillary Shield Booster I. Mid slot. A shield booster that gives a good boost, but has a very high capacitor need. Can use Cap Boosters as charge to negate the severe capacitor need. Only tech I version for now.

Target Spectrum Breaker - Mid slot. A module that has a chance of breaking the lock of ships targeting you, the chance increases the more ships target you at one time. Also breaks your locks. Reduces scan resolution significantly as a downside. Only one can be fitted at a time and the can not be fitted to capital ships.

Small/Medium/Large **Processor **Overclocking Unit I & II - A rig that increases the CPU output of your ship, at a cost of reduced shield recharge rate.

Capacitor Battery edits - All capacitor batteries now also provide a defense against Energy Vampires (Nos) and Energy Neutralizer (Neut) effects. A portion of the effect is reflected back on the aggressor.

There are a few notable absences in the list above. We do have a version of the Micro Jump Drive ready, and new graphic effects to go along with it, but there are a few minor issues that we still have to iron out before we can launch it. The salvage drone is another module that we really wanted to finish, but didn’t have time for. The graphic assets are well on their way though, so hopefully we can make this in the near future (can’t promise dates though). We also wanted to update the Tracking Disruptors to affect missiles too, but the version we implemented was too limited (it only worked if you were flying certain ships and/or the enemy was using certain missiles). We haven’t found a good universal solution yet, so we’ll have to wait on this one.

There are loads of other interesting modules we’re looking into, many of which are based on player ideas. This thread here is a good place to post your ideas, as we read over it regularly and note down interesting ideas for the future. There are many excellent suggestions already in there, but feel free to add your own (don't worry of they're the same or similar to existing ones). We’ll see what we can get to next.

The module work for the upcoming release taught us a lot about what works and what doesn’t work in the implementation process, and is a good foundation to build on. The next step is crafting an overall vision and roadmap of what purpose new module work serves in the bigger picture.

The new modules are being seeded into the universe a little bit differently than often in the past. The original idea was to have this very varied, with one module being available only through LP store and another only through Invention. In the end, we decided to lump them together into a single seeding method, so as not cause too much discrepancy in their availability.

For those new modules that won't be seeded, they will not have any BPOs. Instead, BPCs of them drop as loot in profession sites in normal space and as commander & officer loot. These BPCs have between 3 and 50 runs, depending on difficulty of site/enemy. The sites in question are the pirate faction archaeology and hacking sites.

The reasons for not just seeding the new modules directly to the market are several. Seeding on market has always been sort of a quick-and-dirty way of getting things out there that we've basically used too much in the past - it's much more fun to put the whole process in the hand of the players, so that there is gameplay involved every step of the way (finding BPCs, trading them, manufacturing items, sell items, use items). Also, as the thinking is to start to add modules on a regular basis, so we're looking into ways of how we can fight the potential issues associated with it, such as bloating the market too much and introducing power creep. Seeding through loot drops gives us better control over where and when and how much to seed, which is an important feature for us to have for the future.

This is the End, My Friend

Overall, we in Team Super Friends are really excited to see our additions and changes in the hands of the players and look forward to see what mischiefs you guys get up to (ab)using the new stuff.