Your Client, Made Gooder

CCP Veritas here from the BRAND NEW Team Gridlock.  I know, I know, it was just a couple days ago when I was here blogging about Time Dilation which is a thing that the old Team Gridlock did, but there was a period where there wasn’t one but now there is again and let me tell ya we’ve been busy, folks.  We’ve got a couple new faces – CCP Snorlax and CCP Colgate, both experienced veterans when it comes to all things client. The servers are doing much better these days, so the performance target has moved over to that little piece of tech you all use to fly spaceships around with, making them excellent additions to the crew.

CCP Masheen posted up a blog asking for ideas on how we can make the client better, which has given us some fantastic targets to go after.  But while that was going on, we were already busy hacking at some overgrown forests in the UI and the results are coming out in Crucible 1.2.  Highlights include:

If you’re a fan of having a helluva lot of windows open, man is this patch going to own for you.  Using something akin to magic, we’ve made it so setups like this have about the same load as only having a couple windows open: 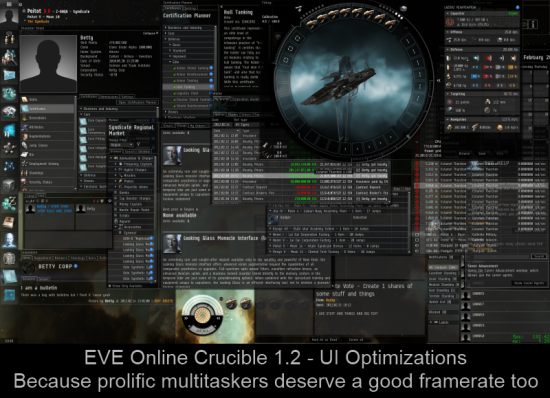 So yeah, there’s a lot of text in a lot of places.  It’ll process and render faster now, which is like a fine glazing of winsauce over everything.

This beasty had a big target painted on its back and we’re not very sporting so we kicked this thing around a lot.  The overview is now much less of a performance hog, so folks doing large fights and such should see a respectable boost to their FPS.  And in case you’re feeling left out ‘cause you’re not into blobs and stuff, we upped the overview’s target refresh rate from .4hz to 1hz - that’s from once every 2.5 seconds to once per second for you non-hertz-aware types.  It’s a hell of a lot less spiky too, which makes being around lots of things a lot less like being punched in the face repeatedly.  It feels pretty good bro, you’ll see.

Allow me to use the communication form of my people: the graph.  This here is a raw frame-time clock in millisecondsbefore and after our improvements– lower meaning faster:

These charts come from a laboratory-style setup where there's just a few hundred random ships sitting about with no special overview settings at all. The improvements are even more noticeable when the ships around you have pilots in them with relationships to you causing various colors to be splatted all over your screen like a Pollock painting.

With the increased update rate, we made one super tiny functional change which you’ll probably notice and hopefully like – the sorting of the overview will lock when you hover over it.  Previously it would freeze if you held your lock button, but with things moving around quicker it felt better to lock sooner than that.

Since the overview and brackets share a lot of code, we made them a bit faster by accident.  I hope you don’t mind.

All this is headed your way very soon. Like, really soon. Okay fine it's Thursday the 16th of February, 2012. Stay tuned for more coming from us as we march our way towards a smoother more gooder client that shows you information faster.