In Apocrypha, we made a couple of adjustments to the overview, one of which was probably more obvious and the other less so.

The obvious one was the fact that, if you hold down control, it now freezes the overview in place in addition to letting you target whatever you click. This has hopefully brought an end to death-by-targeting-the-wrong-thing-because-the-overview-moved, which makes many people rightly annoyed.

The possibly less-obvious change was a review and adjustment of some of the default overview settings. The old defaults have been around for a long time, and a lot of the decisions made about them were based around older tutorials that have since been revised or removed. This is the reason why they included sentry guns but not stargates, for example.

So, in Apocrypha we overhauled a lot of the default settings to something that more closely approximates the way most players use it. This should hopefully mean that any time you have to build up from the default settings again, there are a lot fewer changes to be made. The list of default types should now include more of the things you're interested in and less of the things you're not, the type column is on by default, as is more useful ship information.

There are a few obvious potential changes that we deliberately made. For example, removing fleet members from the overview is one of the first things I do, but doing this by default has the potential to be very confusing for new players. Several of these situations have come up, and in each case we've gone with helping new players over optimizing for older ones - the assumption is that by the time a particular default is no longer useful to you, you should know how to change them yourself!

There were a few more tweaks we were planning to make that got pushed back because we realized late in the day that we'd failed to communicate them properly, and they have a chance of getting you killed if you're not expecting them. We've pushed these out in 1.2, but this time you'll have this blog and a nice prominent patch notes entry to make sure you know what's going on.

The important bit is, as mentioned subtly at the top of the blog, that we're changing the default "blink" states. The current defaults, where only outlaws are set to blink, is rather unintuitive - the blink seems to suggest that there's a great deal of urgency involved, but people who are just outlaws can't actually legally shoot you. By contrast, war targets are currently non-blink by default, despite the fact that they can shoot you at will.

You may notice that a couple of things don't have backgrounds enabled by default, in particular the positive and negative standings indicators. There's a reason for this, and it's a nice example of the sorts of challenges that we run into when making even relatively minor changes  like this one.

Initially, we were going to put the backgrounds on for positive standings, because it seemed like useful information. Then we realized problem #1: "high standings" and "alliance member" have the same color, and while  the tag is a fairly clear distinction, once you get a big block of blue background, that little tag isn't really working hard enough to make it clear which is which.  We weren't happy with pushing it out to players like that, because the goal was to make things less confusing, not more confusing.

Problem #2 was that we couldn't just change the background of the "high standings" option, because we didn't really have any suitable colors to change it to - the only other blue we have is already used for "good standings", which shares the same plus icon and thus would make the two indistinguishable. We talked to the UI guys about this, and they said they'd come up with a couple of new colors that we could use.

They applied some color theory and came up with a couple of shades of turquoise to use for people with positive standings. Problem #3 was that as they're really shades of green, it makes pilots with positive standings look close in color terms to corp mates, and given that the trust hierarchy is usually corp > alliance > friendlies, it didn't make sense for the colors for these to be green > blue > green. Problem #4 also came up simultaneously, which was the issue of legacy considerations. If we made friendlies turquoise, would we have to have a "turquoise list" and an "NTSI" policy? The cleanest solution from a purely theoretical perspective is to change the color of corp or alliance tags so we get a cleaner color progression, but that brings up the same legacy issues in that people know that corp is green and alliance is blue, and again changing that is liable to cause more confusion than it solves.

The final solution? About two hours before the patch build deadline we decided to leave the backgrounds off for people with positive standings by default. Problem solved! It would've been nice to be able to have them on, but given the tight deadline we didn't have time to come up with a solution for that which pleased everybody. We did, however, leave the two turquoise options in the client (although they're not used by default), so if you have a hankering for more exotic colors on your overview, the option is now there.

Those changes in full

The easiest way to communicate this nicely is a picture, I think. So here you go - old defaults on the left, new ones on the right. 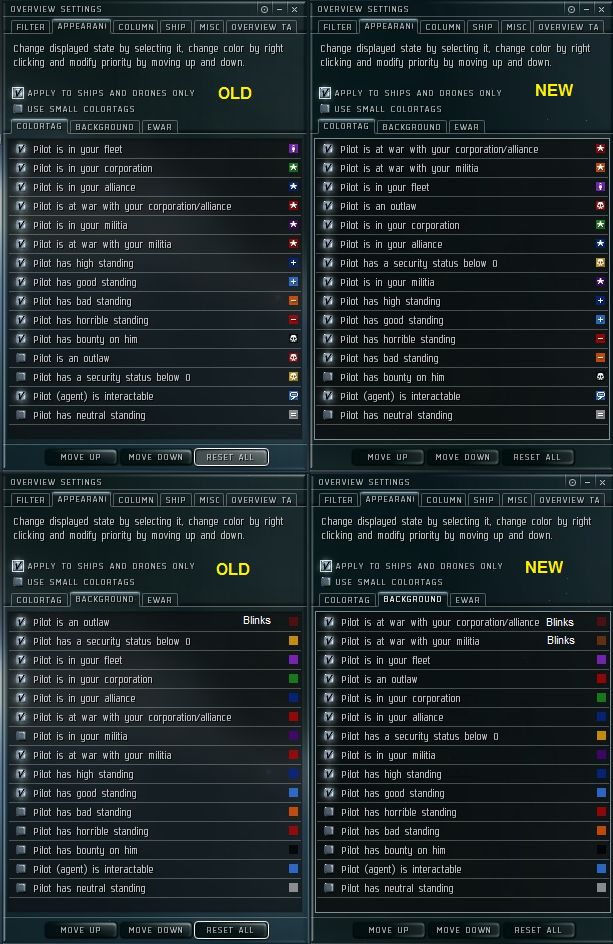 There's a few additional things we're looking into to improve the defaults further, most notably the issue of mission objective structures. Large Collidable Structures  (ie, big things you can shoot at) are off by default currently, as in a lot of our older dungeons there are - as many of you will know - a LOT of these things, which leads to huge overview clutter if they're visible. Unfortunately, they're also often mission objectives, and if they're not on the overview they can be hard to find. The solution we're looking into is similar to the way overseers' structures are already set up in the overview - if we put mission objectives into their own group, we can leave those on by default and solve both problems. There's no solid timeline for this as it involves a fair bit of work to reconfigure all the missions, but it's something we'd definitely like to do.