Corp Hangars on ships and You

So, we're changing Corp Hangars on ships in Retribution.

The short version is that the current technical implementation is an unnecessary maintenance burden; and we don't feel that the complexity of the design is justified by the value it delivers.

On the technical side, the same code is handling corp hangars in stations, starbases and ships. Given that ships in particular are clearly not the same thing as stations, it should not be surprising that there is a lot of horrible special-casing in the code to make this work. The end result, in this case, is a chunk of code that's broken in lots of different interesting ways; the fixes for which are generally mutually exclusive; many of which are effectively unfixable; and for which any potential changes are a QA nightmare to validate.

On the design side, the specific functionality that corp hangars are providing - allowing you to control ship access using corp roles - is overkill for the large majority of use cases; doesn't work consistently (the role checks are only applied to players from your corp); has serious issues with NPC corps; places hidden design tripwires everywhere (who owns the contents of a corp hangar - the pilot or the corporation?); and are in aggregate increasing the complexity of the game in a manner that we do not feel is justified in this case.

Corp hangars on ships will be transformed into fleet hangars: 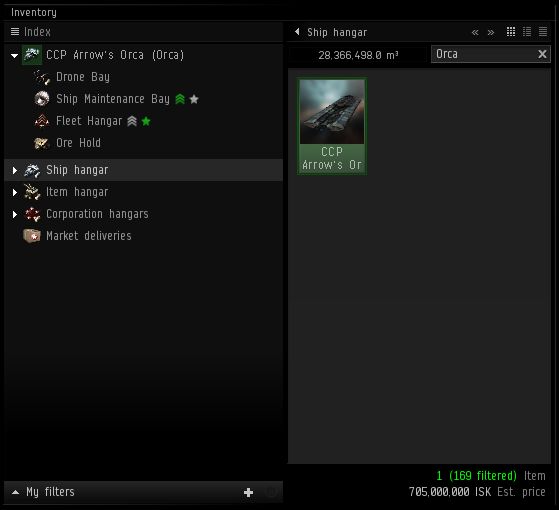 In this image you can see the "fleet" and "corp" buttons next to the Ship Maintenance Bay and Fleet Hangar, which are used to set access permissions on each

Additional changes related to this:

Additional changes that are largely unrelated but seemed like a good idea given that we were looking at the code anyway:

Why are you removing divisions? They're useful!

Yes, they are. However, we're currently of the opinion that they're not necessary, we don't feel that they're adding a lot of value in the most common use cases, and as such we're treating them as a case of unnecessary complexity.

The changes to container behavior in fleet hangars, the new containers, and existing inventory features such as filters, should allow most (but not all) of the current functionality to be replicable in the new system. There will, though, be some cases in which the new system is less useful than the old system. We acknowledge this, and we understand that the changeover will be frustrating for some people, but we need to get the complexity of EVE under control and doing so is going to require functionality downgrades in certain areas. This is annoying but unavoidable.

Yup. The immunity of corp hangars (and other special bays) to scans and their inability to drop loot was a neat workaround, but it was also essentially unfinished functionality, rather than an intentional feature. We recognize the need for secure hauling in the current environment, hence the scan immunity on blockade runners, but feel that the way it's being provided currently is unintuitive and clunky,
and that the "safe hauling" capacity on Orcas is unnecessarily large. Blockade runners should pick up the slack on high-value, low-volume items, while for higher-volume shipments, we're leaving it up to players to figure out how to handle the new situation.

(We're not making any changes to plastic wrap right now, but it has significant technical issues which will likely see it being reworked at some point down the line.)