The four price indices of New Eden have been calculated for June 2011.  For more detail on the indices, please refer to the price level chapter of the QEN.

Mineral prices fall considerably for the second month in a row.  Mineral volume traded and used in ship production is falling.  The market seems to be cooling off after a period of expansion and inflation around the EVE Online: Incursion release.

Datacore prices have fallen sharply since May, when changes were made to the agent system.  Improved agent quality and lower requirements for use have increased datacore production, so prices have been pressed downwards.  Anticipation of this fall may also have lead players with stockpiles to sell them quickly, thus increasing the effect.

The most interesting development this month was the development of the PLEX price, which only grew by 0.4% from May to June, despite the launch of the Noble Exchange and the ability to convert PLEXes to AURUM for such transactions.  Admittedly, the price rose throughout May, spiking around June 1, but it has since fallen back to previous levels, making the monthly average prices in May and June roughly equal.

The values for June are:

The graph shows the development of the indices since October 2003. 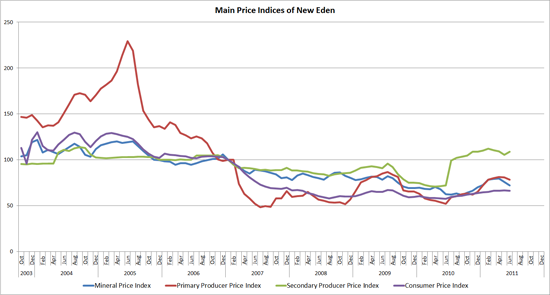 The July indices are expected to be published around the middle of August.