As you may know, the DUST bunnies (sssh, don't tell them I'm calling them that) will soon be joining us in New Eden. We have started to prepare for that and today in Inferno 1.3 you will notice some changes to your chat windows, even though the bunnies are not here yet.

When the DUST Infantry does join us EVE Capsuleers, we will have two different sets of players in the channels and when possible we wanted to show separate character counters for these two groups; one for the Capsuleers and another one for the Infantry.

There were so many icons in the chat windows already that they would have been overloaded and perhaps slightly cluttered if we had just gone ahead and added the two counters in there. So we decided to use the opportunity to do something we have wanted to do for a while: to clean up the chat windows a little bit.

Before there were three icons to change how the chat messages appeared and other three icons to change the member list behavior. We felt that these were options were taking up too much space, especially considering people don't tend to change them that often. There were also a bunch of settings and actions available through right clicking either the window header/tab or the chat output, and even more settings to add for the DUST integration.  We wanted to collect this all into one place, and make more easily accessible and coherent.

Our solution was to replace this all with two utility menus that can be opened from icons in the window.

The first menu holds channel settings and various actions and the second menu holds all member list settings, as you can see in the images below. 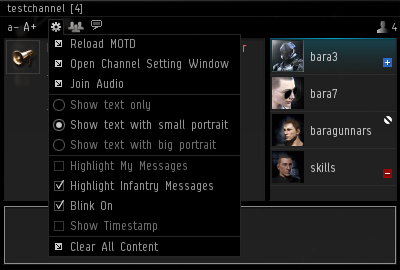 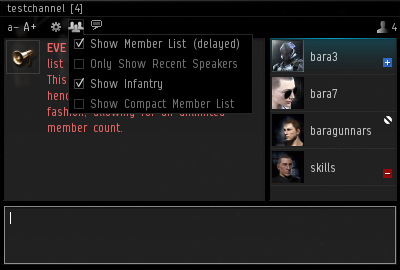 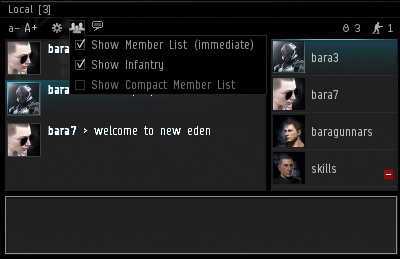 Many of these options and actions should be familiar to you so I will only explain the ones that might not be:

So that was the easy stuff...

A channel can be in either of two modes, immediate mode or delayed mode:

The creator of a channel can set the mode, immediate or delayed, but the max member count for immediate channels is 50 characters.

The way the mode was represented before was rather confusing, but we have tried to simplify it:

I should note that some very big channels, such as the Constellation Chat channels, only allow you to view the recent speakers, not the full member list.

And that finally brings me to the counters... You're still with me here?

Like I said in the beginning, we wanted to show separate counters for EVE and DUST players when possible:

And that's all I have to say about that.