This is the second of two blogs bringing a quick overview of Fanfest 2011 to fans that may have missed the festivities this past weekend. The first of the two can be found here.

DAY TWO DELIVERS A ONE TWO PUNCH IN EVERY WAY POSSIBLE

Friday offered up a tough act to follow, leaving one wondering what kind of crazy news and presentations are lined up for Saturday's grand finale'.

More Feedback through Round Tables

Core gameplay and connection with the community were heavy themes for today's round tables. The NPE, Content, 0.0 and PVP discussions brought in good sized crowds and proved extremely productive. The Women in EVE and EVE on Mac round tables saw great participation, offering invaluable feedback from some of the smaller but noticeably growing areas of the EVE playerbase.

This brings us to the Unconventional Gameplay round table, which took everyone down the twisted, dark road of creative gameplay and inventive use of game mechanics. Some interesting points were the use of Orcas as giant jet cans and shooting one's own structures as a self-reinforcing POS technique. Nostalgia Road and Memory Lane soon faded into Bizarro Blvd as space cannibals not only surfaced, but also shared their favorite recipes. A good time was had by all, however one couldn't help but notice a few people fleeing the room rather quickly at the end.

Presentations and a Good Amount of Happy 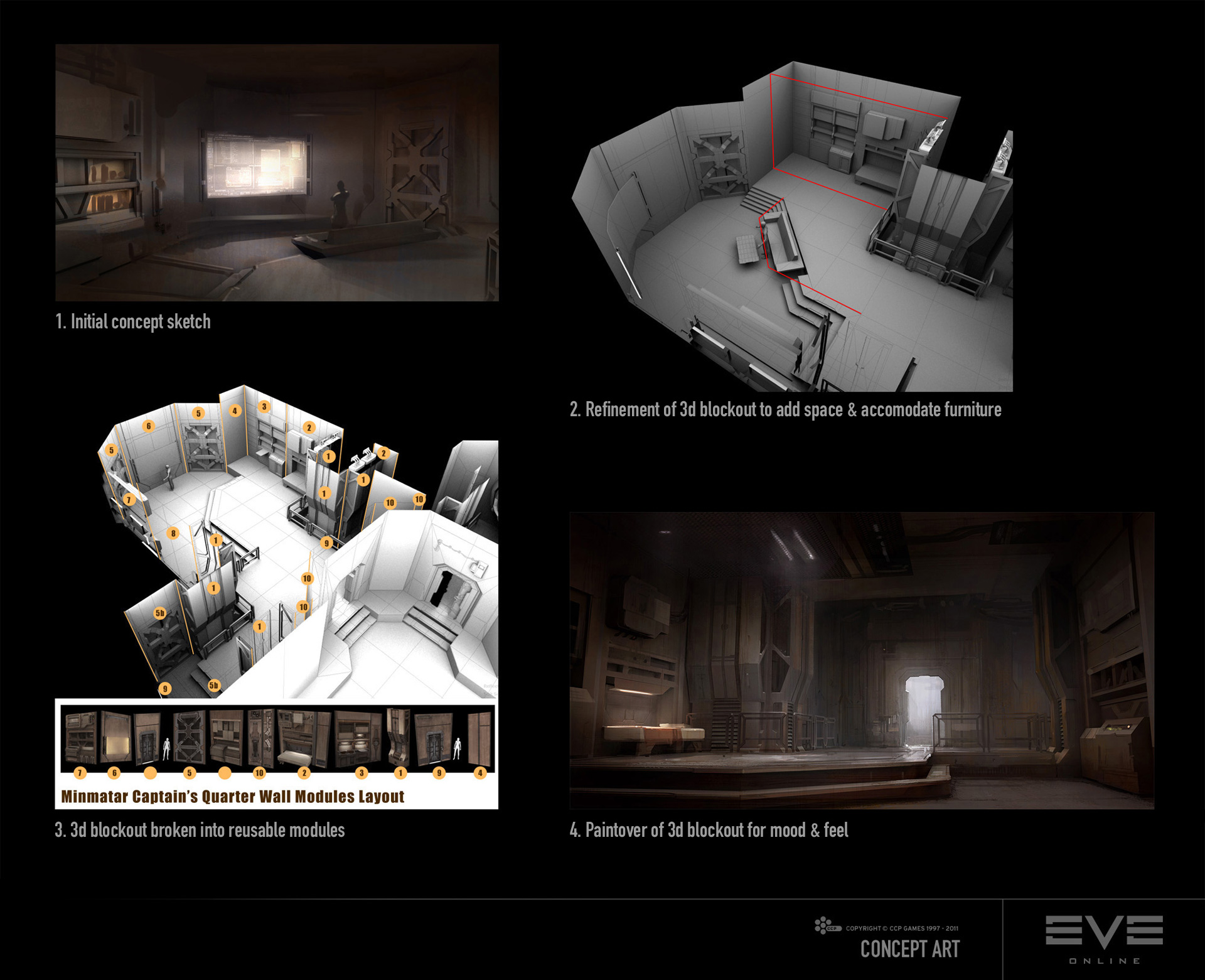 CCP Chiliad presented the New Player Experience and the Captain's Quarters, with multiple renders and a brief walkthrough of the functionality players can expect in the next expansion.  Chiliad emphasized both the benefits this will offer new players and the enhancements it brings to EVE Online for its existing playerbase.

Attendees of the Words, Words, Words and Content presentations - and there were a good many of them - were treated to both entertaining presentations and the news that, more than ever before, the link between gameplay and story line will be stronger. Players will be able to look forward to lore and live events that connect to, drive and are based on the happenings in the EVE universe as we know it.

Oh, and the latest and greatest, most amazing cutting edge (yes, it's that awesome) IBM server was mentioned partially because it's incredible and beyond anything the industry current has running, but primarily because EVE will soon be harnessing its power to make your trades, wars and random explosions just that much more glorious.

Dr. Eyjo spoke on the economy, reinforcing the value of player feedback, speculation and prediction. The presentation included a look at how speculation regarding insurance changes had caused the 'Crash of 2010' and how the market has adjusted itself since then. Overall, the market is active and looking good.

There's a warm feeling that one gets when they know that the people behind their favorite hobby have everything under control. CCP Zulu took to the stage with the energy of someone that burns with passion for what he does. Looking around the audience, you could see smiles and people nodding in approval as he spoke, Zulu, Atlas, the Flying Scotsman, Soundwave and others  covered what the future holds for EVE Online. They pulled no punches and delivered a direct message that one could easily see left the audience confident that this team knew what they were doing, were on the right track and were in touch with what the fans want and need from EVE Online.

After that, things got a bit crazy...

Drunken devs playing an odd variation of charades and salsa dancing on stage can make one wonder if the night had gone too far, but that was just the beginning. For a brief moment, everything went dead silent in the venue... apocalypse quiet, even. Why? Because every visitor and CCPer and staff member piled into the main arena to see the most spectacular sporting event that this year could serve up: chess boxing. Just short of Sly Stallone and Chuck Norris fighting a pack of dire wolves in a minefield, there isn't much that could top the extravaganza that unfolded before our very eyes in and around that ring. With all the Madison Square Garden quality trimmings, the two combatants were introduced and took to the ring in a Brain vs Pain match that evoked enough cheering and excitement that I could actually feel the rumble on the other side of the building as I prepared my notes for this blog.

Wrapping up the night for some, and still just starting the night for others, was a collection of dev-led pub crawls. After that it all gets a bit fuzzy. Friday was a day of excellent news, confidence inspiring talks, and some rather unique entertainment.  It will be very interesting to see how Saturday takes things to the next level.

DAY THREE: HOLD ON TIGHT, IT'S ABOUT TO GET CRAZY IN HERE

The morning started with popcorn and a movie matinee of player-created videos as well as a range of roundtables but it seemed that most people were anxiously awaiting the main presentation "CCP Presents" and the following QnA panel.

With all the great news about Incarna, Captain's Quarters, Live Events and Turrets that was released on Friday, one couldn't help but be filled with a good amount of curiosity as to what was headed our way today.

Kings of the Pew Pew Hill

Prior to the presentation, players were getting pumped up over the PVP finals, where the last four teams readied for the matches that would determine their place in history today.

Wpro arrived at the battlefield and were soon greeted by a barrage of lasers. That these lasers were fit to ships that hadn't a single laser bonus and that no two ships were fit with the same type of crystals made for a truly entertaining match. To quote one of the commentators, "Drunken EVE players shooting rainbow lasers at each other is what Fanfest is all about." The light show was followed by a second wave of equally odd fitting that included smartbombs and other less than stellar choices. Pandemic Legion was able to pull off a win, even with the far-from-optimal but visually spectacular approach they took to combat.

For first place, Tribe squared off against CainToo in an incredible battle that ended with CainToo emerging as the victors.

The newest features and latest announcements were delivered at "CCP Presents..." with news and eye candy that truly exceeded the crowd's expectations. Hilmar kicked off the presentation with a short speech and the introduction of the newly elected members of the CSM.

Torfi Frans relayed the importance of balance between expansion and iteration, explaining that prioritization was an important focus in the process, Videos of visual content iterations such as the new turrets and the latest nebula graphics displayed how CCP is currently upgrading the look and feel of EVE Online.

Establishments were discussed as additional multiplayer environments for EVE Online. Torfi also elaborated a bit on the ideas being discussed for NPCs, booster trade, gambling, and contraband. While emphasizing that none of these are explicitly on the drawing table, he made it very clear that the focus is on making sure establishments and avatar gameplay are built on a foundation of meaningful interaction.

Hilmar presented the Future Vision of EVE Online video and no amount of words can do that video justice, so I'll just leave this link right here for you:

Chessboxing lit up Twitter and the social media channels on Friday, but the Future Vision video, created in the engine being used for DUST 514, set the chat channels ablaze with praise and positive expletives.

The panel saw a range of popular questions, including a few that garnered some crowd-pleasing responses from the dev team.

The Party at the Top of the World

PermaBand, Roxor, FM Belfast, and Booka Shade all raised the roof with thousands of Fanfest attendees and local Icelanders packing into Laugardalshöll Convention Center for a night of drinking and dancing.

Videos of the presentations, panels, events and the party at the top of the world will soon be available on the CCPGames YouTube Channel.