Improvements to the fitting window

I’m proud to announce to you that after 8 years of hard work we’ve finally developed software technology advanced enough to calculate the damage output of your current ship. This comes in the shape of a new panel in the fitting screen, displaying the average damage per second that your turrets, drones and missiles are able to dish out, as well as the total sum of the above (yes, the new technology is also advanced enough to add up numbers). Although keeping this vital information for ourselves for all those years (well, you had already figured this out with third party tools hadn’t you) might sound like a big joke, there were actual technical reasons for the delay, but that technical debt has now been paid in full with the introduction of something we call “Client Side Dogma”, which will be covered in full detail in a later blog. The gist of it is that it’s now much easier to correctly display how values are affected by skills, ships, implants and/or modules in the EVE client, which opens up the doors to a lot of cool (and in some cases way overdue) things.

As EVE combat is far from being a one dimensional affair, it goes without saying that the DPS values are not to be taken too directly, but rather as an estimate on how much pain your boat will deliver on average. The turret damage is simply the “Damage Modifier” on the turret multiplied by the combined damage of the ammo. The turret damage for is then divided by the “Rate of Fire” (which is actually the time between shots) to give us the DPS of that turret. This is then done for all the turrets and summed up to give us the total turret DPS. We do very similar things for the missiles except the missile launchers do not have a “Damage Modifier” on the missiles but we do actually have a “Damage Modifier” on the character that is modified through Ballistic Control Systems.

The drones were a bit trickier as you can have more drones in your drone bay than you can ever deploy at one time, so there is no easy way of telling how much damage the bunch will be doing before you’ve actually launched anything. To keep things simple, we start by ordering your drones by their bandwidth and DPS and then add those values to up until there’s no more bandwidth left.

Since we were touching the fitting screen, we decided to do some more improvements since the patient was already open on the table. This includes much faster loading of the window, CPU and Power grid values displaying the remaining amount rather than used amount, and minor layout changes, such as moving the stored fittings buttons to the bottom.

These changes will be a part of the upcoming Winter Expansion. 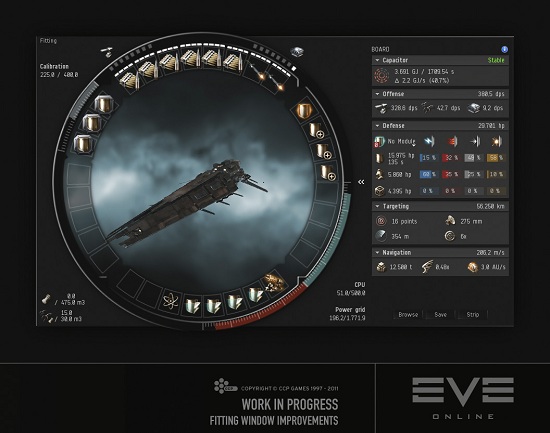