Following the reorganization that recently occurred within EVE, we decided to scale down development of avatar based gameplay and focus the bulk of our feature teams on spaceships. However, we still believe in the vision to bring your characters fully into the world of EVE, it will simply take longer than we expected at first. To achieve that, avatars need to be making a meaningful contribution to the EVE universe. So we put one team on a "slow burn" addressing those issues. There are other core duties as well, like UI fixes and things that take priority, such as outstanding defects on Tranquility.

In regards to the character creator, right now we are focused on doing minor fixes here and there. We’re improving the way you use the four temporary portrait save slots in the posing mode, allowing you to click a portrait to smoothly transition back to it. You can even use the F1-F4 keys to do it. We take no responsibility for what happens if you press F9 to hide the UI and jam on F1-F4 to make some awesome machinima with saved poses. We also did a small fix to the way you tuck your shoes and shirts, that used to be hard to see. We are also thinking about more tattoos! 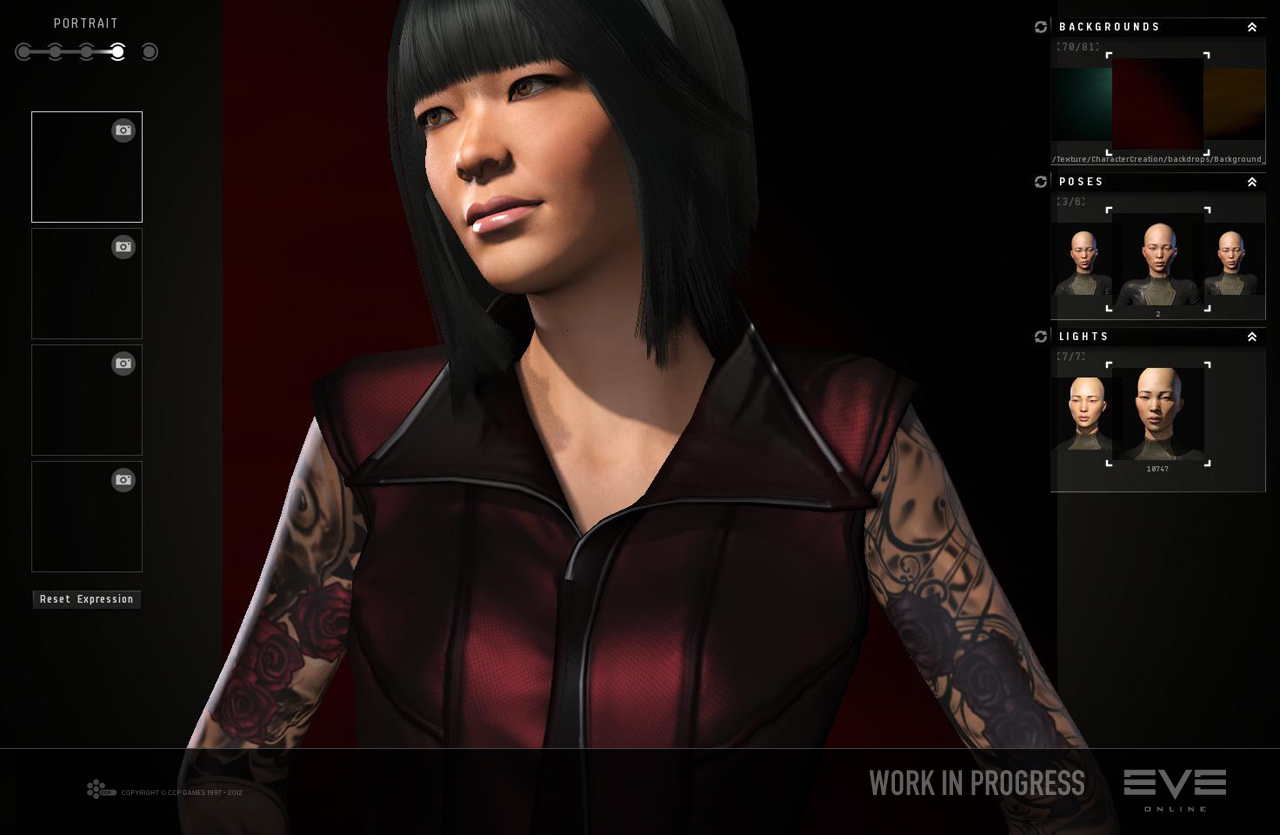 Do you often dream of a big tattoo but worry what mom will think?

Let‘s take another look at that plan

After giving you access to your own Captains Quarters we had been planning to roll out corporation owned and run establishments with contraband trading, group boosters and gambling minigames. That got put on hold due to our changed focus. Rather than stubbornly keeping to that plan, we have decided to go back to the drawing board and examine better: what delivers a meaningful experience? What provides replayability, fits into existing paradigms already established in the game, provides opportunity for collaboration and/or violent griefing, and feels like proper sandbox EVE?

First off, we are identifying a few core ideas that have actually been bounced around for quite a while, but fell by the wayside due to scoping and our strong focus on providing a proving ground for our technology.   We will then create playable gameplay prototypes of gameplay features and try them out within the team, and within the company. These prototypes are likely to be too raw to share with the greater player base but we will keep you updated with our progress and will share things we think are appropriate. The purpose of all this prototyping is to make sure we provide a strong vision for avatar gameplay, have a good demonstrable idea of why it is engaging and better understand the technology we will need to create in order to make it a reality.

When will it be ready?

You mean avatars in EVE? In a way, we're not going to wait until it’s all perfect and the interior of every ship, station, structure and city in the entire EVE Universe has been modeled, but rather when we have a feature that is its own functional ecosystem of gameplay then hooks into the greater ecosystem of EVE as a whole, and it provides good replayability. There have to be ways to get better at it, ways to profit from it but also ways to take risks and lose. Once we have that, then we have something we can start sharing. It’s a different approach than before. It means you won't get it as early, but what you will get will be more ready. But it won't be “done” in the sense that we’re done with it, because with any online game, it's never really done. When you first ship it, that's when you begin, and then follows the conversation with you, the players, on how we can improve and iterate on it.

In identifying our future path, we are very keen on hearing your ideas and concerns on the issue. We have been following discussion on the forums, like this thread and also look forward to discussions at the roundtable on the topic at our upcoming fanfest. In the end, it’s your usage and enjoyment of the feature that matters the most.  Everything else comes second (or third).