Hi, I‘m CCP TopKnot, one of the tallest and hairiest employees of CCP. My team, the Core Infrastructure team, is arguably the most productive team in CCP, baking-wise. When we are not busy baking delicious treats, we work on the installers, patches and the Repair Tool. Recently, we put out a devblog about the generic patches and the multi payload installer. Our recent work in this area has been done with the goal in mind of bringing all these things together in a simple package in order to make your EVE-playing life easier. Introducing the EVE Launcher...

The EVE Launcher is meant to become your new access point to EVE Online. It makes sure that your client is up-to-date so that you no longer have to start the client to be informed that you need to get the latest updates. The launcher will let you know that your client is out of date and download everything that is needed and patch your client for you.

If this sounds familiar, this is what the SisiLauncher has been doing for people playing on Singularity. In fact, the SisiLauncher is the technological, emotional, spiritual and conceptual predecessor to the Eve Launcher (Sorry, I’m trying to get my word count up. Also… plethora. I’ve always loved that word. Rambunctious, too. Decadent is another good one. Delicacy isn’t bad either). (editor’s note: loquacious is also a word)

But why are we wasting our time doing this? By moving all of this tech into one product, we believe we are both making us happier as well as making you happier. We get happy because it simplifies our work, especially in the building process for EVE Online. We don’t need to make specific patches anymore, so our build process becomes simpler and faster. You get happy, hopefully, because we have made it easier for you to get into a ship and do some pew-pew.

I think you will agree with me that the new EVE Launcher looks pretty nice. Our team does a lot of things well but UI isn’t one of them. So we got a lot of help from some cooler devs with horn-. rimmed glasses that gave us an awesome looking UI that is also very usable. 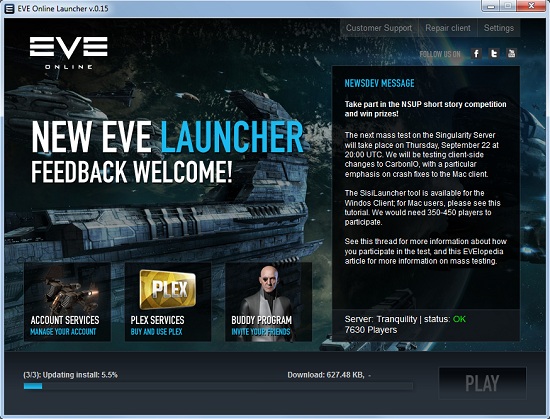 The idea here is to keep it as simple as possible.  A big-ass progress bar will tell you what‘s going on and how much work is left and an unnecessarily huge button allows you to play the game once it is ready.

The space above will give you some relevant stuff to look at if you get tired of watching the progress bar zoom along at insane speeds (given that you have a fiber Internet connection and an SSD, but who doesn‘t have those?). This space will be populated with the latest news from the world of EVE, the status of Tranquility and other fun stuff. We understand that, with the sheer bulk of EVE-that’s-happening-on-a-regular-basis, it’s easy to miss a key announcement or devblog or Fanfest or CSM vote etc. as they just scroll on by as time marches on. We also know that, sadly, not everyone has the time or inclination to monitor EVE news, devblog RSS, Facebook, Twitter, newsletters et al., although each and every one of you should! To that end, the EVE Launcher serves the purpose of making sure you are aware of the things happening in your universe in an easier to digest, visually appealing manner in a super obvious place. Communation be fundamental.

We also wanted to give you some control over how the launcher uses your tubes to access the Internet (which is of course just a series of tubes). Want to limit the download speed of the launcher? No problem. Do you have a high-latency connection and want to distribute the download to more threads for faster download just like download managers do? No problem, are 5 threads enough or did you have another number in mind?

What we‘re dropping on Singularity is by no means the „final product“. We think this has a lot of potential for making your and our lives better by simplifying the update process. We also want to get your feedback and ideas on it before we add more meat on the bones.  One of the components of the launcher is an integrated web browser and we really look forward to you guys abusing it since we do have some concerns about its performance, especially in older versions of Windows.

In regards to future improvements, a few ideas that we have been tossing around include:

The launcher will be dropping on Singularity soon to give you guys a chance to use it and abuse it. Please let us know what you think of it and what you would like to see in its future versions.

The launcher is currently only available on Windows. That means that if you are playing EVE on a Mac you won’t be able to enjoy it, our apologies.

To try the launcher now, please update your Singularity client to the latest version either by patching it, running the SisiLauncher or just getting the full EVE installer for it from here. You should then see the file launcher.exe in your client folder. Just run that to enjoy the goodness of the launcher.