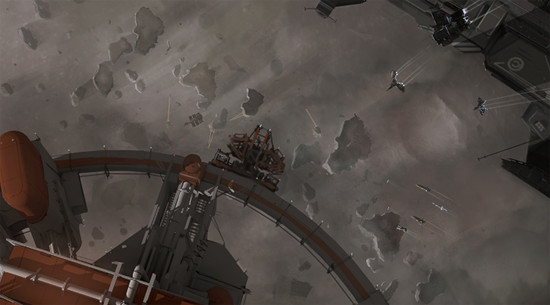 Hello again ingenious capsuleers! This dev blog will cover the plans for the next series of Upwell Structures to become available to Capsuleers: Refineries.

We are releasing two connected dev blogs today. The first looks back at the last year of Upwell Structures and towards the future of updates and additions to their functionality. It also includes links to a survey that we’re releasing to gather your feedback about what priorities you think we should set in our quest to make all Upwell Structures better and easier to use for everyone. I highly encourage checking it out!

Rather than looking at structures as a whole, this dev blog focuses on just one upcoming set that is poised to revolutionize the way resources are harvested and processed in New Eden.

I’ll start out by addressing the question of release date. Refineries are firmly scheduled for “when they’re done” and we are not planning on rushing them out before they are ready. This dev blog begins the next phase of community discussion on these features and we want to come to you with the plans early to ensure that we can incorporate the best feedback. We are especially looking forward to hearing from you at Fanfest next month, which is why we are releasing this dev blog now instead of waiting to unveil these plans in a keynote. We believe that events like Fanfest are at their most valuable when we at CCP spend them listening more than talking.

The rest of this blog will describe the current state of the design of these structures and their service modules but everything here is subject to change and you should expect that quite a few things will change between now and release.

Drill Down to the Details!

Refineries will come in medium and large sizes with prices between that of Engineering Complexes and Citadels. Like the earlier Upwell Structures they will have docking and tethering ability as well as the whole suite of standard structure features like storage, fitting, insurance, repair and corp offices. They will be able to fit the same set of basic Standup modules as Citadels and Engineering Complexes. As we continue to add more features to the basic Upwell framework both before and after the release of Refineries they will gain those upgrades as well. The benefits of the larger sized Refinery will primarily come from increased defenses, more generalized rigs and increased docking capabilities, with all the core Refinery functionality available in both Medium and Large versions.

Refineries are intended to be the hub of resource collection and resource processing operations. At launch these operations will largely revolve around reprocessing ore, mining moons, and reacting advanced materials together to create composites. In the future we will continue to look for opportunities to tie more resource collection and processing functions to these structures. For instance, mining buffs and support roles provided by the structure are not out of the question over the medium-term, and we are interested in investigating the possibility of shifting the sov mining upgrade role from Infrastructure Hubs to Refineries eventually.

Reprocessing will be the simplest and most universal of the initial Refinery roles. Refineries will receive bonuses when using the existing Standup Reprocessing Facility service module, and the existing reprocessing rigs will be rebalanced to go along with these new bonuses. On patch day we will automatically unfit existing reprocessing rigs that are fit to Citadels and Engineering Complexes so that structure owners can have the option of either fitting their rigs right back on to the same structure or moving those rigs to a Refinery if they wish.

Moon mining is an area of gameplay that will be receiving very significant changes with the release of Refineries. The old moon mining system in starbases has been untouched since the early years of EVE and we believe that there’s a lot of room to make a system that provides better gameplay for many kinds of players.

The key goals of the new moon mining system are to create a new form of active group gameplay that organized corps and alliances can aspire towards and compete for. The new system must support gameplay for many different types of players, involve strategic choices, and reward players who can cooperate well.

Those of you who have been following the community discussions around moon mining over the last several years probably won’t be surprised by the key parts of this design, as we are building on a foundation of ideas that have been brought up and discussed many times from many sources.

Here’s a walkthrough of the process currently planned for the new moon mining system:

The time scale for this whole cycle will be controllable by the owners of the Refinery, within constraints. Longer cycle times will mean more ore generated in each explosion.

To be clear: Refinery structures themselves will be deployable anywhere that other Upwell structures can be deployed. However only Refineries deployed near minable moons will be able to fit a moon drill service module. The deployment UI for Refineries will clearly show whether the structure is in a location suitable for moon mining before deployment is confirmed.

We’re still in the process of determining how much or little we may need to adjust distribution of moon minerals, and announcements in that area will come later once we’re a little closer to release. However, for this first release we are not currently planning on expanding moon mining to areas of space where it is not available today (highsec and wormholes). Although this gameplay has the potential to be interesting and fun in any area of space we want to be careful not to dilute the regional value of tech two resource collection too much.

Since the time between events will be fairly long, we are expecting this group mining event to be a special high-value occasional event where your corp’s usual miners can turn their attention away from their normal belts and clusters for a few hours and players who only mine once in a while can pull out their barges and join in. In many ways these events will be like mining incursions that are partly controllable by the structure owner. The income from mining these asteroids will of course vary based on market forces and demand for different moon materials, but we expect mining the fields generated by good moons to be very valuable with higher isk/m3 than the high-end ABC (Arkonor, Bistot, Crokite) ores.

With all this new activity around the moons of New Eden, the corporations claiming the moons will need new tools for tracking what’s going on in their territory. The mining ledger is the new open-ended tool for Refinery owners to keep track of who is mining in their belt.

Each Refinery structure with an active moon drill will keep track of all the mining done in its associated belt, logging the character, corporation, ore type and amount mined. This will allow Refinery managers to share profits or request fees as they see fit, allow mining operations to more easily organize themselves, and allow corps and alliances to see who has been ninja-mining their fields without permission.

The ledger will be available in the client, exportable to spreadsheets, and obtainable through an API for those who wish to build advanced tools. It will not update fast enough to provide a real-time warning system against ninja miners, but it will allow owners to look back at what happened in the past and plan their revenge or negotiations as they see fit.

All moon drilling refineries will log mining activity in the moon asteroid fields they generate, and we are also investigating opening up the option of tracking entire solar systems worth of mining for Refineries that are also owned by sov holders.

Refineries will also bring changes to the system for reacting moon materials and gasses into more advanced materials. Reactions are a key part of the resource processing chain for Tech-2 items, Tech-3 ships, and boosters, and we believe that the current reaction system using starbases has a lot of room to improve in user experience and quality of life.

With the release of Refineries, reactions will be moved from starbases to a special set of service modules exclusive to Refineries. These service modules will enable reactions as a new type of industry, using the same interface as manufacturing and research. These new service modules will have the same security status restrictions as the existing starbase structures, meaning that reactions will be limited to lowsec and below. Like other industry, the new reactions system will not have hard limits on the number of jobs per structure, and will have per-character limits that can be increased with a new skill.

The existing reactions will be converted to new blueprints that enable the reaction process in the new system, and new reactions will include small amounts of ice products in each run to compensate for the lower number of starbase towers needed for advanced industry.

Thanks for joining us for this look ahead at the work-in-progress Upwell Refineries! A big reason for releasing early dev blogs like this is that we want to hear from all of you, on the forums as well as in person at Fanfest!

If you haven’t already done so, I highly recommend checking out the companion blog to this one that covers the past and near-future of Upwell Structures and includes a survey so you can have your say in our prioritization of changes.

Everything in this blog is subject to change as we respond to feedback and adjust designs and get closer to release. We’ll be keeping you up to date on these and other structure changes through more blogs as well as our official forums.