Hello Capsuleers! This is CCP SoniClover  fresh from my holiday hibernation to tell you all about what shenanigans Team Super Friends is up to for the Rubicon point release due at the end of January.

What you will see from us in 1.1 can be neatly divided into two parts – couple of variations of siphon units on one hand and a new deployable called Encounter Surveillance System on the other.

Let’s start with the siphon variations. There are two of them, both also small like the one released in Rubicon.

The Small Mobile ‘Hybrid’ Siphon Unit steals polymers (from Polymer Reactor Arrays). It does not steal Fullerenes directly. The batch sizes of the polymers vary a lot (currently ranging from 2 to 1000). This huge range makes it difficult to work with. As there is really no reason for this great of a range, as part of introducing the Hybrid Siphon Unit, we’re adjusting the batch sizes for polymers a bit. More on that below, lets first look at the most pertinent stats:

Polymer siphon amount: 50% of batch size (we’re using percentages here because of the size variation differences)
Waste factor: 10%
Capacity: 1200
The build cost is the same as the base version.

A bit more on the batch sizes. We’re increasing the batch size for the smallest ones, so they all have a batch size of at least 100. We’re adjusting volume and blueprint material requirements accordingly so that the end result remains the same (i.e. each batch takes the same size as before and building requirements require the same amount of polymers proportionally). Furthermore, we will run update scripts to update all current stockpiles of polymers when the changes go live. This includes all inventories, as well as buy and sell orders and contracts. This means that players will retain the correct ratio of polymers.

Money for Pirates, ISK for Free

Now for the new deployable. The collective term is Encounter Surveillance System, or ESS. Let's start with a quick tl;dr version, refer to the rest of the text for further details. After 1.1, players receive 95% of a bounty income in Null Sec. An active ESS in a system changes the direct payout value to 80%, but further 20% is stored in a system-wide pool that can be accessed through the ESS. This additional bounty payment can rise to 25% over time. So post-1.1, players have the choice to either skip using an ESS and get 95% bounty value, or use ESS and generate 100% up to 105% of bounty value, but have a portion of it be at risk.

Each race has their own ESS, so there are four in total, Amarr/Caldari/Gallente/Minmatar Encounter Surveillance System. An ESS allows an empire to monitor bounty-generating activities in the solar system it is deployed in. Why this is a thing is due to an on-going and ever-growing feud between the empires and Concord. Concord has decided that monitoring these bounty-generating activities (i.e. killing pirates) outside of their jurisdiction is becoming too expensive, especially with the lost income from high-sec Custom Offices. As a result, they will no longer pay the full bounty amount. There is no statistical difference between the racial variants

After Rubicon 1.1 the payout for killing pirates in Null Sec is 95% of the actual bounty. So a pirate with a bounty of 100.000 ISK will give whomever killed it 95.000 ISK after the point release.

Deploying an ESS in a system affects the payout. With an active ESS, the base payout (what you get directly into your wallet) is reduced further, down to 80% of actual bounty value. This is because Concord doesn’t like it when somebody starts interfering with their bounty activity monitoring.

But what happens also is that the ESS starts computing bounty payouts. This is set to 20% of the actual bounty value. This means that with an active ESS in a system, the total bounty payouts are 100%, or equal to the value players receive today. The main difference is that part of it is only accessible through the ESS and does not go directly to the player. The ESS represents empire monitoring efforts that allow them to compensate players to offset the reduced value that Concord is paying out.

The longer an ESS is active in a system, its payout value increases over time and can rise from 20% to 25%. This addition comes on top of the other payments, i.e. the base 80% payment remains the same.  This means that with a fully increased ESS, the total payment is 105% of the actual bounty value. Note that this increase only applies to bounties generated after the increase has occured. Also, the increase in payout level is based on bounty-generating activity, so the payout level will not rise for an active ESS if there is no bounties being generated in the system.

The value the ESS tracks creates a system-wide pool. This is a common pool for all bounties generated in the system, there is not a separate pool for each player.

The Share option will share the contents of the pool amongst those that have contributed to the pool. Each player then gets his own contribution back. Choosing this option is effectively confirming the monitoring efforts of the ESS as correct, allowing the empires to transfer ISK directly to the contributing players. This ISK is transferred even if the contributing player has left the system or is offline.

The Take all option will give the total contents of the pool to the player accessing the ESS. Choosing this option is effectively telling the ESS its computations are incorrect and the player will take on the responsibility of dividing the ISK correctly. At least, that’s what the empires, in their infinite wisdom, are assuming that the law-abiding pilots of New Eden will do. The ESS hands out the value of the pool in the form of ISK tags. See more below in ISK tags. It takes time for the ESS to print the tags and hand them out, this time is 40 seconds.

Here is an early version of the window: 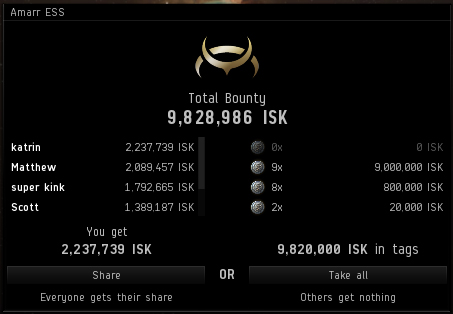 The choice thus for players is either to skip deploying an ESS, receiving 95% of the bounty value, but getting it all directly to wallet. Or they can deploy an ESS, generating at least full bounty value and even more over time, but with a portion of the bounty value being at risk of being stolen.

Let’s try to cover some of the further aspects of the ESS in a bullet-point list (plus some repeats):

When a player chooses the Take all option when accessing an ESS, that player receives the ISK in the pool in the form of tags. These tags are called Bounty Reimbursement Tags. Each empire have their own tags and the tags dropped depend on the ESS type (so the Amarr ESS will drop Amarr tags). The Bounty Reimbursement Tags have a volume of 0.01. The actual functionality is that the ESS stores blank tags and then prints tags and drops them when needed.

When the Take all option is selected, the pool is divided into tags, using as few tags as possible. Remnants (i.e. whatever is left under 10K) are removed.

This is the End

You can test the new siphon units and the ESS feature on SISI right now, we’d love for as many as possible to try them out and give us feedback.

That’s it for Team Super Friends. Our main goal for Rubicon and its point release has been to introduce different ways for players to affect each other’s gameplay, introducing risk where there was none before, give players some interesting choices and general mayhem. We hope we’ve hit at least some of our goals, improving EVE in the process. Until next time.