Optimization is such a wonderful concept. Technically it means “the procedure or procedures used to make a system or design as effective or functional as possible”. Technically applied to a Dev breakfast, it would imply filling a mixer with bread, meat, salad, coffee plus various other possibly out of date consumables and directly inject the output to our veins through a syringe. That would be a good optimization of the workflow, since we could skip lunch break and gain overall efficiency in the process.

However not everybody seems to agree with that since I was told to “optimize” something else and never touch a syringe again (I am a misunderstood genius). So instead I was assigned to take care of weapon management and grouping, which was enough work to keep me away from medical tools for a while.

So what does this feature consist of? A Minmatar engineer would probably sum it up this way: grab some duct tape, apply it to your ship’s weapons, tie them all straight together, add a big funnel at the extremity and you are good to go.

However since we all know how sloppy Minmatar engineering habits can be, let us explain the core concept in more details. With this shiny new system you will be able to group your ship’s guns/launchers together into one entity. Setting up the group will be done through a single right-click menu and activation will be toggled by a shortcut or button.

Below are some in-game pictures to illustrate the above. Please note this is still a work in progress and as such they may not entirely reflect what is going to reach TQ.

This is how the current weapon management panel works. Currently, each gun is displayed and controlled individually.

Grouping weapons is done through a new option available in the small white arrow menu located below the ship management panel.

Dragging and dropping modules on top of each other will create a weapon group. There are certain restrictions to this which are covered in more detail later in this blog. Modules that cannot be grouped disappear when entering this mode or appear grayed out if they are not of the same type as the selected weapon. You can exit the grouping mode at any time by clicking the arrow menu again.

Groups are displayed as shown below, with the number of weapons appearing as a red counter in the bottom left of the icon.

The merged icon has all the standard options that would be available to the individual weapons with the exception of offlining. Putting weapons offline requires breaking down the group first. Yes, weapon grouping allows the user to reload all stacked weapons with a new ammo type in one click. 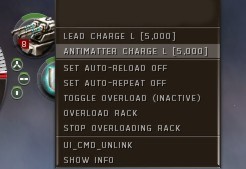 Just to be absolutely clear, this feature only stays a way of displaying turrets/launchers in the module panel, it does not physically group weapons together in the fitting screen; as such it does not free up high-slots. This also means that when your vessel is lost your grouped modules will still be individually dropped inside the wreck (or be blown up in the ship explosion); no weapon group will appear to be picked.

Below is an example on how the fitting screen appears with this feature. Notice that weapons will now display the group they belong to: 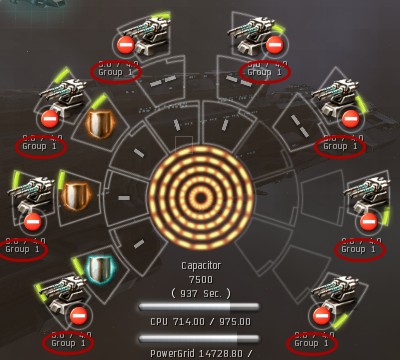 Of course, there are limits to how this system will work. Since weapons are bound together, it will not be possible to attack multiple targets with the grouped bank. However, players will have the ability to create smaller weapon groups (two links of four turrets instead of one link of eight for instance) for dealing with multiple targets.

Another issue is with the types of weapons that can be grouped. Since all grouped weapons have to be exactly the same, you cannot have a mixed group made of TI, TII and named/faction/deadspace variants at the same time. That also means they all have to be unloaded, fully repaired, fitted to your ship and online before this feature may be used.

As stated before, the most obvious advantage gained with the new method is easier weapon management. Also, since weapons are grouped together, this method frees F1-F8 shortcuts up on your module overlay for other mid/low-slots (remember, this does not free the ship module slots themselves).

As a side effect, we want to emphasize that using this feature will have a beneficial effect on overall latency since calculations are counted from one combined group and not eight individual modules in an extreme scenario; as such we highly recommend its use for fleet battles. Below is a comparison between the individual and grouped mode.

Here are some answers to the most commonly asked questions regarding this feature.

Which modules are affected by this?
Only turrets and launchers for the time being. We do not exclude the possibility of adding new modules to be grouped in the future but this is not currently planned in this release.

Is there any other way to group modules than using the small white arrow menu?
Yes, you may directly press and hold SHIFT and drag/drop modules without having to go to this menu to enter grouping mode.

How is heat applied to the stack?
Heat is equally applied to the weapons inside the group; since this feature doesn’t change anything to the module position themselves in the fitting screen, spacing weapons to reduce overheat effects will still work properly.

How are the grouped weapons attributes calculated?
The system was designed to retain balance between grouped and individual weapons. For example, damage multiplier and capacitor consumption will be properly multiplied depending on the number of grouped weapons, while falloff, tracking, range will remain the same. Hit dice is rolled separately for each module that is grouped while taking into account wrecking hits, so you won’t have a wrecking hit taking the summed up damage of all weapons (which would just be insane).

How does this work with ammunition?

Since all stacked weapons need to have the exact same type, can I load damaged crystals into them?
Yes and damage will be equally distributed among all crystals when received. If one crystals breaks first you will however need to reload the stack.

How is that feature working with missiles since it is not an instant weapon type?
One “uber” missile is launched per group and we stack the hitpoints accordingly. However this would create a problem with the current implementation of defenders on TQ, since they would insta-pop the stacked missile and reduce your DPS output to 0. For example, having two heavy missile launchers grouped together would launch a 60 hitpoints big missile to your target. Since a defender does 76 damage, it would nullify twice as much damage as it does in current mode.

To prevent that, we need to do minor tweaks to missile hitpoints. In the chart below, we are only changing missile hitpoints to be equivalent to defender damage to unify the situation. The goal remains not to change general missile damage or resilience. So in the situation above, a stack of two heavy missiles will now have 140 hitpoints while one defender will remove half of it.

We also reduce the missile stack damage depending on its remaining overall hitpoints. So if the group of two heavy missiles gets reduced from 140 to 70 hitpoints, it will do 50% less damage to the target. This last rule only applies to stacked missiles, not ones launched in normal mode.

But how about smartbombs?
We also thought about that. Large smartbombs do around 300 damage, medium 140 and 70 for small. That means a large smartbomb currently destroys anything but Citadel torpedoes. To keep this mechanic, we are comparing smartbomb damage to a single missile hitpoints in the stack. If the smartbomb does more damage than the individual missile hitpoints, the whole stack is destroyed, otherwise nothing happens.

Citadel torpedoes are not affected by this rule and while you can link them in the UI, you will still release one per launcher.

You are just censored unbalancing smartbombs!
No, not really, since a smartbomb will already pop all missiles below citadel size. Of course it needs to be timed perfectly, but it all depends on how you launch the missiles at the moment, either one after the other or in a single volley. And in all cases, you can always switch back from grouping to individual mode to fire them back in a delayed salvo.

Well I think pretty much everything was covered here. The whole design remains a work in progress so it may change by the time it is out, which should be on the Quantum Rise expansion. We hope this will bring some glimpse of what is coming in the near future and that you will enjoy it, because we surely will.