With Friends Like These... - New Ally System | EVE Online

In EVE Online, wars are fought for any reason the human mind can come up with and are a true melting pot of emergent game play. We've always left it to the players to define WHY they fight, but we've also always wanted to give you guys more tools to frame your war-mongering ambitions.

The new Ally System introduced in the upcoming Inferno expansion is an addendum to the war mechanics, one that allows players to more easily get aid when finding themselves dragged into an unfavorable war, through our mercenary marketplace. A corporation or alliance can join a defender in a war as an ally, fighting alongside the defending side. The war system will effectively regard the two one entity when it comes to tracking war progress.

A previous dev blog (found here) discussed the ally system a bit, but now we have more to show on the UI side and can discuss the nitty gritty in a bit more detail.

My Kingdom For An Ally

So, lets say you find yourself on the receiving end of war declaration and you want to swing the odds a bit more in your favor. You want to it to be known that you’re interested in getting help.

To do so, you go to your Corporation panel in the Neocom and select the Wars tab.

In the 'Our Wars' tab you’ll see the wars you’re engaged in. You can click the sword in a war in which you’re the defender and check the Open for Allies checkbox on the bottom of the popup window called Allies (which also lists all active allies you have, and existing ally offers). Note that only the CEO (or a Director) can make this change.

The 'Our Wars' tab also lists the ally status of your wars and shows  the wars that you’re an ally in.

If you’re the CEO/Director, you see an exclamation mark (!) next to the sword, when you’ve received an offer from someone interested in becoming your ally. The offer includes a text field and an ISK amount. You can either accept or decline the offer. If you want to negotiate with the interested party, you can use the normal communication channels for that until an agreement is reached. 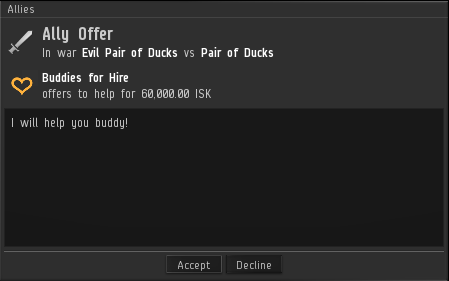 Can I Come In And Play?

On the other side of the coin, if you want to become an ally for some interested party willing to pay for your services, your first stop is the All Wars tab in the Corporation/Wars section. This is a list of wars to spectators, but a mercenary marketplace to potential sellers of muscle.

In the All Wars tab you will see a list of all active wars (it shows 50 most recent, you can also use the search function to find wars of a specific corporation/alliance). Wars where the defender is asking for an ally are shown with a plus sign on the sword. Wars where there is one or more allies is shown with an asterisk (*) next to the sword.

The best way to find prospective patrons is to filter by checking the ‘Assistance requests only’ checkbox. You can now see all wars where the defender is seeking allies.

Click on the sword icon on the right, this will bring up a box where you can enter message and suggested ISK cost and send it to the defending corp/alliance to initiate contact. When the defender accepts an ally offer, the ally becomes a formal part of the war and can start fighting 24 hours later. 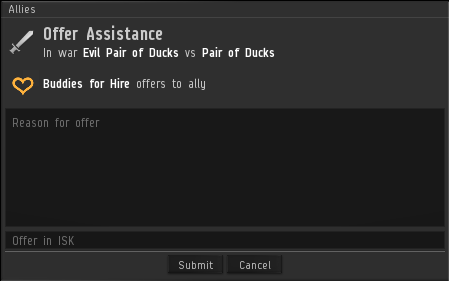 Say Hello To My Little Friend the Rules Lawyer

Now it’s time to step back a little and look at some of the rules and regulations surrounding the ally system. Let’s do it in a nice, tight bullet point list:

Just Shut Up And Tell Me Why

So, now many long and fancy words have been spent to explain the what and how of the ally system. But the why is still left unanswered.

One of the main goals we had in reworking the war mechanics was introducing more options for the defender. The line we had to skirt here was maintaining the war system as primarily a tool mechanic (as opposed to feature mechanic), so whatever options we would introduce had to comply to that.

The ally system ended up being a good solution here, because not only does it provide a simple way for someone to get help, but it also introduced risk for the aggressor and an avenue, or career, for the many pilots interested in mercenary-like activity. And most importantly it emphasizes one of the key truths in EVE – that having friends is really important.

Future Is Not A Dirty Word

So what’s in store post-Inferno? While Team Super Friends is not going to do a whole-release worth of iteration on the ally system, there are a few things in the pipeline.

Setting a fixed contract length to ally contracts is one thing we want to do. While the current implementation is fine for the most part, there are a few edge cases where the eternal ally bond can become an issue. It should also make negotiations smoother, when the knowledge of the exact length of the contract is known beforehand.

Another thing we’re looking into is to exclude the ally system from mutual wars – if a war has been made mutual, then no allies can be involved and existing ally contracts are cancelled. This mitigates a little the fact that now when a war is made mutual the only way for it to end is by surrender. We’ll monitor the early experience with the system post-Inferno and make a decision whether this change is needed/wanted.

There are several improvements for the ally marketplace that we want to look into. Most notably, giving defenders the ability to enter more information when looking for allies, such as by allowing them to enter location, price range, etc. In a similar vein, allowing mercenaries to advertise their services is something we’re looking into, where they could filter by preferred area of operation, their strength, etc.

Another area we might iterate on a bit is the war report - we want to show more clearly the contribution of each ally in the war - how much loss they've inflicted and received as portion of the total. This is in addition to other additions we want to make to the war report that are not just ally related, such as introduce timelines and battle reports.

Finally, we want to expand a lot on the information spreading of wars and their state. We want to show information about active wars, their war reports and how wars concluded in EVE Gate. This can include several kinds of leaderboards, such as ranking war loss inflicted vs. war loss received, rank the effectiveness of allies (i.e. how much loss do they inflict of the total, etc.) and similar rank lists. One thing we want to be very careful about here is what data to count and what data is presented. For instance, wars against entities that actively fight back will count more for these rank lists, to encourage people to fight those willing to fight. Getting this information on EVE Gate would give players a better understanding of the military strength of corporations and alliances, with a special focus on mercenary corps. Naturally, it can also act as a nice status symbol for those interested in this kind of activity, with entities competing for the ‘Hall of Fame’.

On the whole, the ally system is an exciting addition to the war system, one that makes wars more of an uncertain business and an interesting avenue for mercenary pilots in New Eden.