Good news everyone! We here at Team Pony Express are continuing in our mission to revamp, rework and improve parts of the EVE Online client which haven't been touched in a while or just need some more attention.

As many of you will know, we completely rebuilt the Corporation Finder with our Winter 2012 expansion EVE Online: Retribution. In addition to those changes we planned on streamlining the recruitment management process for corporations. Although we were unable to release these changes in Retribution, we are delivering them now to you as part of our Retribution 1.1 point  release in February!

Our main goals with these changes were to provide better visibility for the player looking to join a corporation and to improve the tools used by Recruiters and Corp Directors by displaying information more effectively and in greater detail.

Let's go through some of the nitty-gritty details:

CCP Prism X re-worked and revamped the backend and cursed the living daylights out of it while doing so. His new and improved code makes much more sense and helps us developers delivering better features to you.

The flow of an application is mostly unchanged: a character sends in an application, the application gets reviewed and the applicant then is accepted or rejected. The main change is that the player who applied to join now has to confirm that he wishes to join the corporation after their application has been accepted. This change fixes a few loop-holes that were present in the system; now the player has extended control of all their character’s movements to every stage of the process. Some of these loop-holes could cause a character to jump between corporations, or to join a corporation which was not their first choice and could subsequently be stuck in if they were assigned roles.

By asking you to confirm that you will join a corporation which has accepted your application, we put you in the driving-seat in determining where your next destination will be.

Applications now have a single status which is descriptive enough for everyone to understand:

Corporations can use the status to filter and manage applications.

To save you from lengthy loading times we only show applications from the past 3 months, but there is an option available to see older messages upon request. 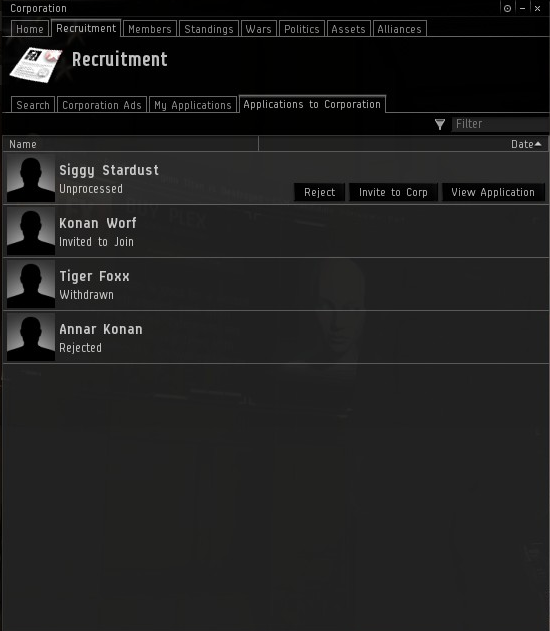 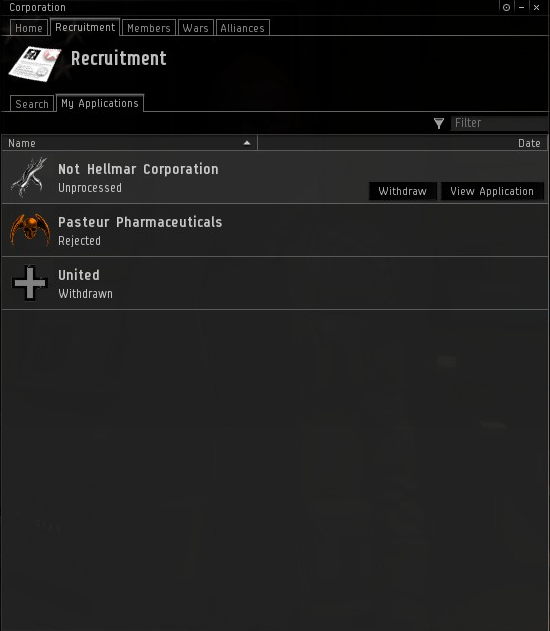 This is a bit you’ll also like a lot. Currently all players receive a standard mail message upon joining a corporation. This can now be edited by the corporation to include any and all information you wish to send to new members. 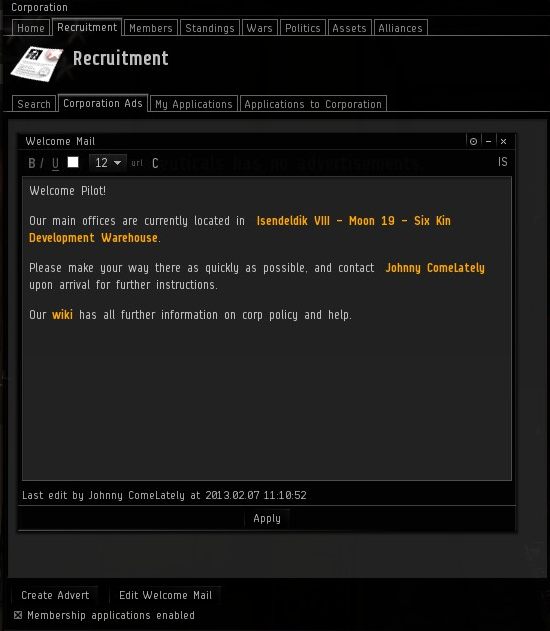 The Singularity public test server has been updated with these changes and we would love to hear your feedback!