Now, where did I put that fleet? | EVE Online

One of the features that I am personally most excited about for the upcoming Dominion expansion (well, not counting the new browser, the sovereignty changes, the awesome new graphics...).

Let me try that again: A thing that I'm reasonably excited about is a cute little feature that we call the Fleet Finder.

What's even cooler is that we took the opportunity and worked on the overall fleet UI and some of the basic fleet functionality like the broadcasts.

This is something we've been iterating on for a while and it‘s running on Singularity as we speak. If I were you I‘d stop reading right now and go play with it!

Still here? Okay, fine, let's go through the highlights then.

One of the things you'll notice straight away is the new "Fleet" button on your NeoCom. This will allow you to access everything fleet related in a single window. We've combined the broadcast and the fleet window in one and added the Fleet Finder into it as well. This approach is much more user-friendly and should be helpful to newer pilots who are finding their footing in Eve.

You are able to completely close the Fleet window without exiting your fleet. I'm pretty sure that this will come in handy for people in large, 200+ man person fleets because updating the fleet member list is a bit laggy with that many people (this is something we're looking into).

The Fleet Finder allows you to advertise your fleet to your friends and allies. They can then join the fleet without requiring an invitation, or you can set up your advert in such a way that you will need to approve each application to the fleet, whichever way you prefer. 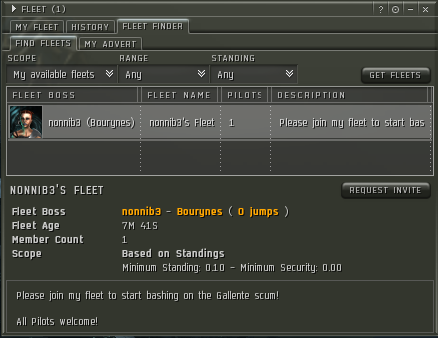 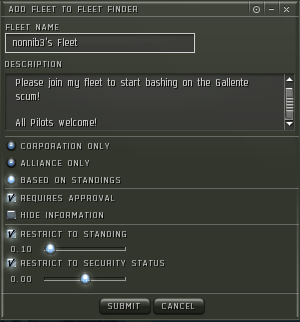 The Fleet Finder will be extremely useful for alliances and corporations as a way to gather people up for a war. No more "x up in corp channel" messages. :-)

You can set up your Fleet Advert to allow people in your corporation, alliance or even those outside your alliance to join (providing you have set their standing to positive). You can also use the standing constraint along with the scope constraint. This will allow you to open up your fleet to people in your alliance, but only those above a certain standing, for example.

Another play style which will benefit from the Fleet Finder is Factional Warfare. Few things are as frustrating as waiting a whole evening for someone to invite you into a FW fleet when you know there's pew pew'ing all around you but no one answers your 'x me up plz, lolz!' cries.

People looking for fleets can filter by distance to fleet boss, scope (corp, alliance, etc), and their standing to the fleet boss, making it easy to find a fleet in your vicinity. Not to worry though. For the paranoid out there the boss can hide his location and the size of the fleet.

The Fleet Finder usurps the old "Open fleet" functionality where you would set your fleet to be "open" to your corporation or alliance and could then paste a link into chat for people to join your fleet. This feature has now been removed.

However, if you register your fleet in the Fleet Finder you can drag it (either from the advert list or from the 'my advert' tab) into the chat window to achieve the same functionality that you're used to with the old open fleets. This is one of the many things that we added to this feature after getting feedback from you, the players.

We're changing the way that broadcasts work. Previously the type of broadcast would dictate who would be able to receive it. Despite making perfect sense to us at the time the rules turned out to be extremely convoluted and no one really understood them. This time around, as CCP Greyscale so eloquently put it, "we're taking advantage of the fact that our players are not morons."

So, with that in mind we're putting the power into your hands. When you send any type of Fleet Broadcast you decide who should receive it. You can choose between superiors, subordinates and everyone. Your current broadcast mode is displayed prominently in the UI and you can assign a shortcut key to cycle between them.

Here is how the recipient rules will work for squad members for example:

In addition, the type of broadcast dictates the range of the broadcast like before. The possible ranges are Proximity, Solar System and Global.

If you open up the broadcast settings window or look at received broadcasts in your history tab you will see the range of each broadcast type.

Since the broadcasts have been revamped in such a way that the broadcast sender chooses his/her recipients the scout role is no longer needed since all it did was allow a fleet member to send the "enemy spotted" broadcast to everyone. Therefore we have removed that role.

As before, the recipient can choose which broadcasts to listen to and it's much easier to manage your broadcasts than it was previously. All in all, the broadcasts should be much more useful than before.

This is a pretty handy little feature that we're adding into Dominion. When you create your fleet you can set it up in Loot Logging mode. When this is active all loot events are sent to members of the fleet making it very easy to divide the spoils after that trip into wormhole space. 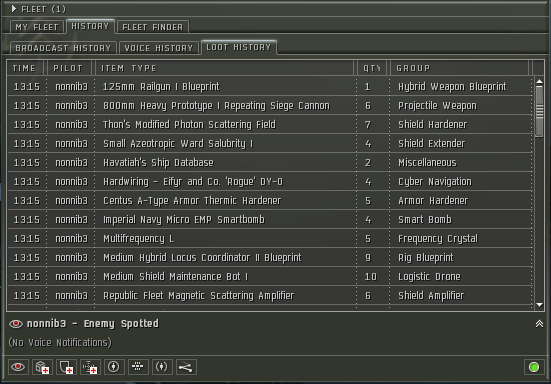 You can even export the loot log to disk so that you can collect all the info in excel and make pretty graphs of all the money you're making.

This is a completely optional feature and is something that the Fleet Creator specifies when the fleet is created. People don't have to use this feature if they don't want to but chances are that a lot of pilots will find this useful since trust isn't exactly something that New Eden is brimming with ;-)

We have spent a lot of time tying the fleet feature together as a useful tool to manage in-space relationships. It should be much more user-friendly than before.

For example, every entry has a relevant right click menu and there are context-sensitive tooltips with additional information on many of the elements. In addition, we've added a new "Member History" tab which shows you the history of joins, leaves and role changes (added because of player feedback).

We are also working on the welcome page and will provide new wiki pages on how to use the feature from a-ö (a weird Icelandic letter at the end of our alphabet).

There is a lot of little things here and there that you might not necessarily realize when you're using the feature but all in all it's a smoother ride.

As I said, we've received some marvellous feedback on the forums for the fleet feature and much of it has been incorporated into the system already.

Another important addition is to allow people to quickly rejoin a fleet if they get disconnected (or try to activate an easter egg by holding down the control key and typing QWERTY).

These all seem very fair to us and is something that we are considering along with possibly new broadcasts and more usability tweaks.

We have been working on these new Fleet features based very much on player feedback. A lot of the usability tweaks that we did was done because you asked us to. This is one of those features that's there to make your lives easier. If there is something you want to add or change please let us know.

All this is either on Singularity now or on its way there in the next few days. Go there and play around with it, and give us feedback on the forums. Together we can make this feature better and better with each iteration.

So, step one: Go to Singularity and try it out.