PLEX for GOOD: The Philippines - Results

On November 8th 2013, a Typhoon of catastrophic proportions struck the Philippines leaving an incomprehensible trail of destruction in its wake. Today, the death toll for this catastrophe stands at more than 5,900, with more than 1,700 still missing and over 12 million people affected directly by the devastation.

Along with the rest of the world, CCP followed the devastating impact of Typhoon Haiyan (known locally as Typhoon Yolanda), and the development of increasingly dangerous living conditions for the people of the Philippines.

The reaction to these events from the EVE Online community has been simply staggering; with hundreds of our players calling for CCP to once again host PLEX for GOOD.  The deep concern for the wellbeing of those affected and such a strong, united will to assist those in need exhibited by our community has been both a humbling and heartwarming experience for everyone here at CCP.

On November 20th, 2013, we answered calls from the EVE Community and opened donations via PLEX for GOOD, in an effort to allow our Community to assist in raising funds for the Icelandic Red Cross efforts in the wake of such a devastating natural disaster.

As PLEX donations began to arrive, the Community Team brainstormed ideas on how to further expand on previous PLEX for GOOD drives, and what quickly followed was the announcement of the PLEX for GOOD Charity Live Stream, which was hosted on December 7th.

By the time December 7th arrived, the EVE Community already had a myriad of fundraising initiatives in place within New Eden that had raised a total of 4251 PLEX, or $63,765 US, smashing the totals from any previous PLEX for GOOD drives.

We began the live stream with our heads held high, and deep sense of pride in what the community had achieved so far.

What followed was simply astonishing.

By the time 16:00 arrived, less than two hours into the Live Stream, the community had donated a total of 8482 PLEX, or $127,230 US. Much to our amazement the donations continued to flood in for a further five hours, and when the lights went out at the end of the live stream, the entire team involved was left speechless at the sheer scale of the generosity displayed by the EVE Community.

By the end of the stream the community had donated 12345 PLEX, for a total of $185,175 US, and as we began to pack away equipment the donations didn’t stop.

On the morning of Sunday, December 8th, we returned to the office to tally up the final number of PLEX, and were once again left shellshocked by the level of generosity that the EVE Community has shown.

In total, the EVE Community raised 12,726 PLEX. This equates to the following:

To put this achievement into perspective, our largest previous PLEX for GOOD drive was in 2011, in the wake of the Tsunami that struck Japan, which raised 2549 PLEX, equivalent today to $38,235 US.

Today, that total has almost doubled, and now stands at an unbelievable $340,000.

Yesterday, all those involved in the fundraiser and the live stream had the pleasure of taking a trip to the headquarters of the Icelandic Red Cross to meet with their leaders, and the President of Iceland. We presented them with a check for $190,890 US on behalf of the players of EVE Online. 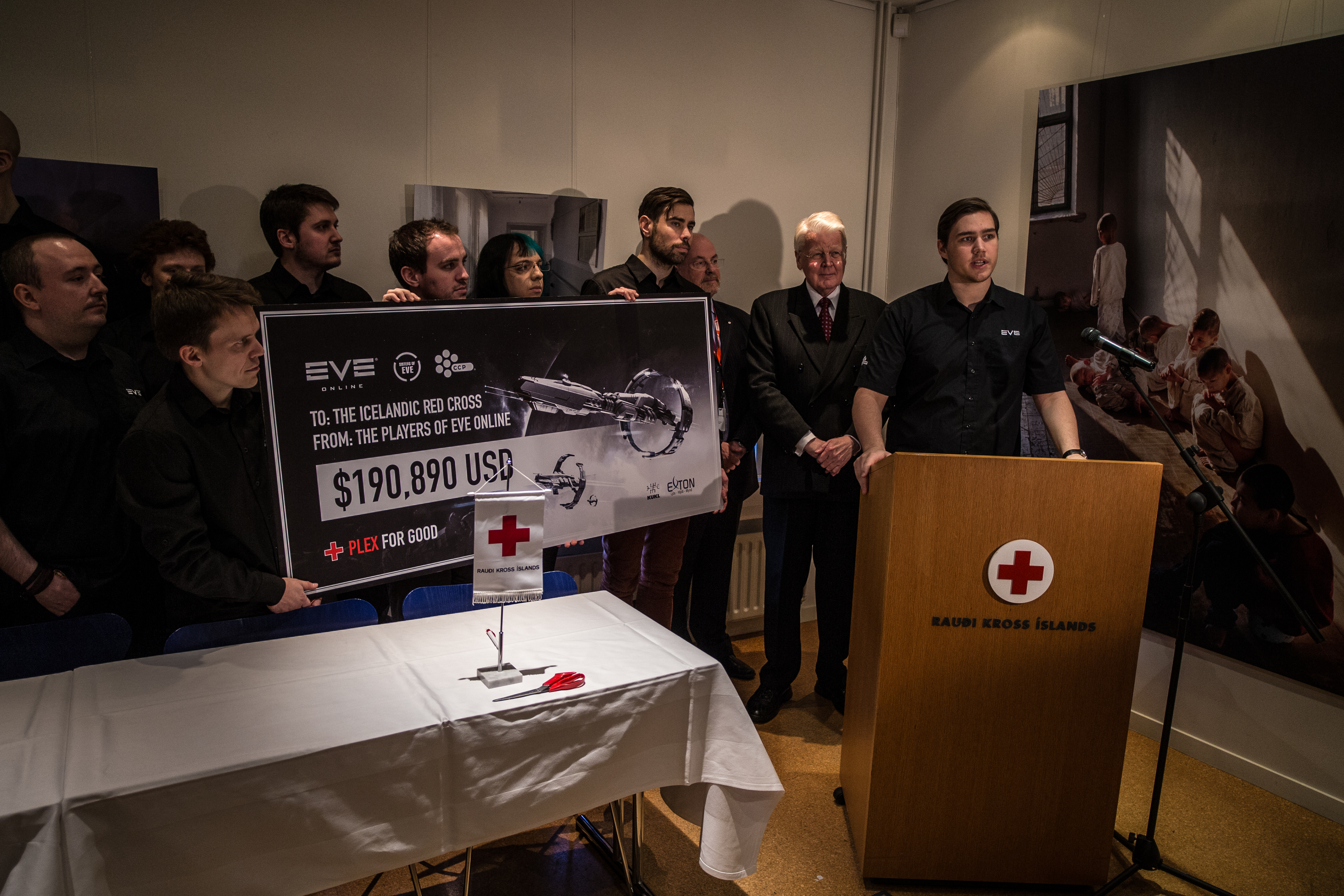 In a speech given by the President of Iceland after the check was accepted, he acknowledged that through online gaming communities such as ours, and through the strength of international cooperation via virtual worlds, a new age is dawning in terms of collaborative fundraising for good causes, as borders across the world are broken down and online communities band together as a formidable force for good.

While EVE players may explore the limits of “morality” in all different directions while they play and the more unforgiving and hardcore side of EVE often shows up in media stories, the EVE Community have demonstrated their immense strength and capability as a force for good over the course of the last two weeks, and has established itself at the forefront of this new breed of fundraisers.

Here at CCP Headquarters, we are finding it extremely difficult to choose words to express the profound level of gratitude that we wish to convey to what is, without a doubt, the finest gaming community on Earth.

From everyone at CCP Games, we wish to convey or most profound gratitude, and our deepest and most sincere thanks for your unbelievable generosity,

On Behalf of the PLEX for GOOD Taskforce