You have insulted my honor - I demand satisfaction! Dueling comes to EVE Online | EVE Online

You have insulted my honor - I demand satisfaction! Dueling comes to EVE Online

As CCP Seagull recently announced, Retribution 1.1 will be shipping on 19th February. With this change, Team Five 0 is adding something that was much requested as part of the Crimewatch changes, but that didn't fit in to the original release plan: The ability for consenting players to flag themselves for legal combat against one-another without (legal) outside interference - AKA Dueling.

Prior to the big Crimewatch revamp we introduced in Retribution, this was possible via a slightly awkward method of can-flipping: By 'stealing' one unit of ammo from someone's jet-can, you could flag yourself to that player, allowing them to legally attack you. This wasn't just used for setting up a 1v1 fight or trying to trick someone in to attacking you first - players started getting creative by using this mechanic to host tournaments and king-of-the-hill contests in high-sec. This emergent behavior is just what we like to see. However the new Suspect flag (allowing everyone to attack you for loot-theft, instead of just the can owner) means that setting up such controlled fights is no longer easily possible. Thus I set out to do my best to ensure we introduced a replacement mechanic to support this as soon as possible.

It is quite straightforward really and builds on top of Retribution’s new Crimewatch behaviors: A player can issue a Duel Challenge to another player in the same location (either in the same station together or in space together). The target is then notified of the challenge, and has a period of time (currently 30 seconds) to either accept or refuse it (somewhat similar to the conversation-request mechanic). If the target refuses the challenge (or simply doesn't respond within the required time), then the request is dropped and nothing further happens. However, if the target accepts the challenge, then a 5-minute Limited Engagement is created between the two characters. From here, the existing Crimewatch mechanics take care of the rest (Punishing neutral remote-reps, extending the life-time of the engagement due to module activation etc). When a challenge is accepted in space, a notification is sent to all ships in the immediate vicinity, informing them of the honorable combat that is about to ensue! As might be expected, challenges can only take place in high/low security space - Null/WH residents already have plently of tools to satisfy their grievances. 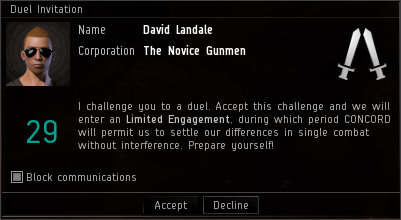 Note that there is no special exclusivity or isolation from outside interference just because a duel has been agreed. Other players can interact with the combatants exactly as normal, providing that they are prepared to accept the normal Crimewatch consequences. (Inteferring in a Limited Engagement via remote-assistance can net the assistor a Suspect flag, making him a global target).

There's a couple of restrictions in place to ensure that this can't be used to cause undue load on the server, and to prevent 'challange-spam' from negatively disrupting someone’s client (similar to the exploit of convo-bombing someone)

There’s a number of ideas for building on this in the future. For example, fleet-to-fleet engagements have been suggested as one way to scale up these engagements. Further suggestions are also welcome. The first pass of the Dueling feature should be hitting the Singularity test server any day now. Please try it out and let us know what you think in the comments thread linked with this blog.