Setting up and maintaining a planetary interaction chain can be a logistical challenge. You have to remember what planets produce what resources, what reactions are needed to create the products you want, and try to make everything as efficient as possible to minimize customs taxes. It's possible to make your own spreadsheet to keep track of things, but that is cumbersome and doesn't help you get started.

Luckily, there is a site that takes care of all this for you. EVEPlanets.com is a wonderful website that simplifies Planetary Interaction, allowing burgeoning magnates to quickly figure out where to drop their command centers.

When Planetary Interaction was first introduced to the game, Anariser decided to explore it. “I just found I was missing much information,” he says, “which I needed in order to decide what and where I can produce.” He quickly realized that other players would also lack this information in a quickly sortable format, so he decided to fix it.

Luckily, the official EVE database dump contains information on all solar systems and their planets. While the dump did not contain information on production schema, he was able to find an XML online which contained it, and integrated it with the database dump.

Anariser took a fairly unique approach to designing the site. “I took my sketchbook and drew all the pages with a pencil, then I started coding and created all the major functions and pages.” This entire process took several hours.

Then, because he “hates to code HTML”, he asked a friend to code the website for him. After securing the agreement, he went to work in Photoshop, turning his pencil designs into digital reality. The next day, he showed his designs to the coder and a working prototype for the site; later that day, the site was complete.

EVE Planets looks simple at first glance, but actually contains quite a lot of information. You can look at individual planet types to see what materials can be harvested and produced on them. Alternately, you can look for specific tier-1 materials to see which planets you can harvest them from.

Of course, this simple information is easy to find, but the more in-depth tools are awesome. By selecting one of the schema, you can see every resource needed and a full production flow chart. Additionally, you can see each of the resources and what planets they appear on, so you can quickly find what combination of planets you'll require to manufacture the product.

And perhaps the most powerful tool is the system search. If you have a home system you're looking to exploit, you can see exactly what sort of goods you can produce in it, all in one simple page. 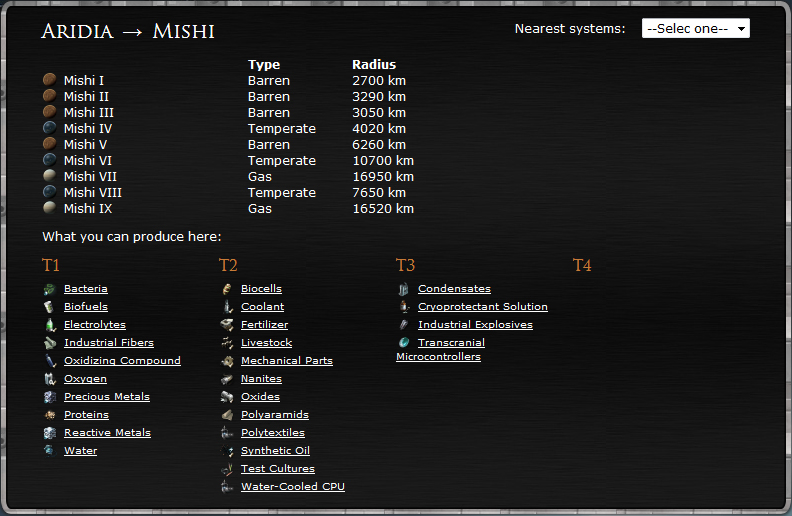 For Planetary Interaction, there are few tools as useful.

Anariser started his EVE career pirating in Aridia. Through that, he met a great corp and joined them for the next year and a half. Eventually, the corporation joined Goonswarm Federation. “It was so long ago, I don't remember what happened exactly. My memory is filled by all the voices of people who I never met – good people, reliable friends.”

In real life, he is a 27 year old professional web developer from Ukraine. He loves programming, cycling, and watercolor painting.