True Stories – What did you think? | EVE Online

True Stories – What did you think?

Today, the fourth and final issue of EVE: True Stories is out. Thus concludes the epic saga of the downfall of Band of Brothers as told by Daniel Way, based on the not-so-objective account written by the Mittani. 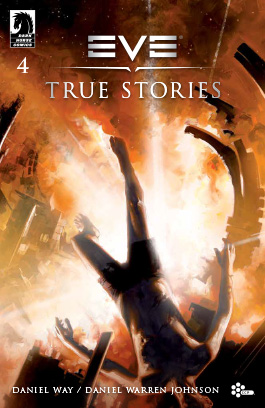 This is a moment for reflection. It’s the first time that we at CCP have taken a player account from EVE Online® (upvoted by you) and had it adapted for traditional media.

A short history of True Stories

In April 2013, we asked EVE players to submit stories to the True Stories website. With a limit of 5.000 characters per story, you could tag characters, corporations, celestial locations, corporations and alliances.

The site was open for submissions for a month until 06 May, the tenth anniversary of EVE Online. Initially you could only comment on stories, not vote. Over 767 stories were submitted.

Once the submission period was over, voting began and continued for 14 days. During voting, you could see how stories were faring. Twelve thousand votes were “up” and 3,800 were “down”. For each story, only one vote per user account was allowed.

When voting was done, one story reigned at the top with 2,283 upvotes, the second coming in with 1,524 votes and the third with 892 upvotes.

At that point 109,000 unique people (unique IPs actually) had visited the website, and 9,900 logged in and either submitted a story, commented or voted.

Choosing between great stories is a great challenge

We took the topmost stories and presented them to the writer of True Stories, Daniel Way. After much deliberation of the finalists,  including  the Guiding Hand Social Club and the Disbanding of Band of Brothers, the BoB story was chosen. The other top stories were discussed as well, each great in their own way. CCP then provided some editorial assistance, but in general tried not to influence his portrayal of the story so that the line from player to writer and back to player would remain as unbroken as possible.

The comic book is born!

A-64 page comic book was born, split up into four 16 page chapters. Each chapter illustrated by a separate artist and cover artist.

The first installment was then published on 19 February 2014, with subsequent issues appearing every two weeks.

Our friends in the Guristas were kind enough to intercept convoys of freighters sailing from remote manufacturing facilities. Thus we were able to secure a few advance copies of the hardcover edition of True Stories. Those will be available to purchase at EVE Fanfest, in Reykjavik this May 1-3rd. Get yours, signed by art director Borkur Eiriksson and editor David Marshall from Dark Horse. Another great reason to go to fanfest.

What next? How can we improve?

Now, we are here, roughly a year later.

First, on behalf of CCP, I want to thank everyone that took part in the first round of True Stories, everyone that submitted entries, voted, commented or just idly clicked through the stories.

Second, I want to ask for your input. We have a few questions for you. Of course, you don't have to answer all of them, but we would really love to get your feedback on some:

Please put your feedback in this thread.

Thank you for reading and participating!