Welcome to the Community Beat where we shine a spotlight on some interesting things that have emerged from the player base in the last couple of weeks. There are some in-game events to participate in, some cool player-created art, and some awesome third-party tools. Let’s gooooo!

October 13 is Totality Day which marks the anniversary of the creation of the Pochven region and the conclusion of the Triglavian Invasion. Triglavian-aligned capsuleers - known as Kybernauts - celebrate this anniversary with a series of events starting on October 9. Check out this forum thread for information on the events. 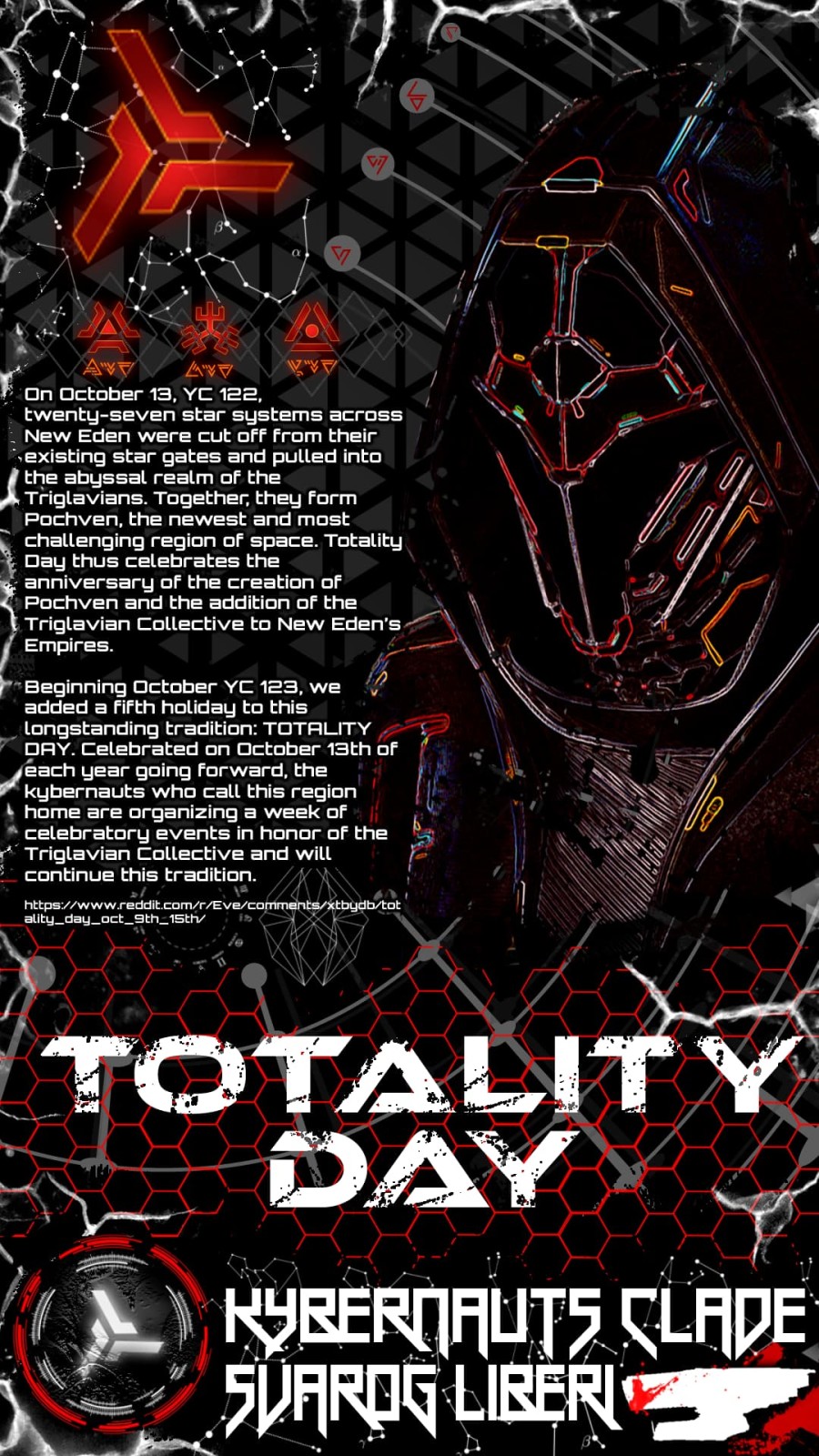 The force of capsuleers opposing the invasion who support EDENCOM also commemorate this occasion, albeit more solemnly. They are planning to hold events for their community and you can find out more about what they're organizing here.

There’s been a lot of really amazing Lego content coming out of the community this year (especially around the time of Battle of the Bricks) but this most recent offering from timen_lover over on the EVE subreddit has blown us away. 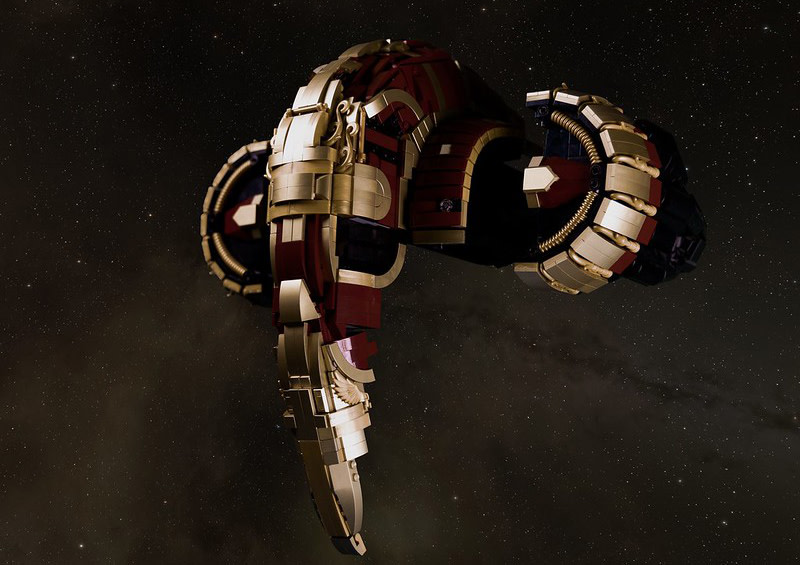 Click on the image above or here to see the full album of Sarum Magnate renders on Flickr.

This very cool video by Samara Mikakka landed in our inbox this week.

We reached out to Spectre Fleet leader Virion Stoneshard for some background:

With the recent destruction of citadels (and content) in Tama, we started doing more in Ahbazon; poking the locals for fights, putting our own fleets in system, et cetera. At some point I threw an Astrahus in there and that sparked a chain of citadel fights, starting with us kicking White Sky, No Forks and groups like Thunder and Sword out. Eventually, I bought out the Dock Workers Fortizar in system and later Nisuwa Cartel made a full on declaration of war on Spectre Fleet, which the last few fights have been centered around.

Spectre Fleet is one of EVE's oldest and most respected (and feared!) NPSI groups. They welcome participation from members of the space-faring public. If you'd like to be involved in action like that shown in the video you can check out the schedule of upcoming fleets here. You can also find them on Discord and in-game by joining the SF Spectre Fleet chat channel!

Over the weekend of 1 - 2 October, the 18th Alliance Tournament officially got underway with the commencement of the Trials Tournament. The Trials started with 35 teams in the mix and the result will determine which seven will earn their spot in the ATXVIII main tournament in November. 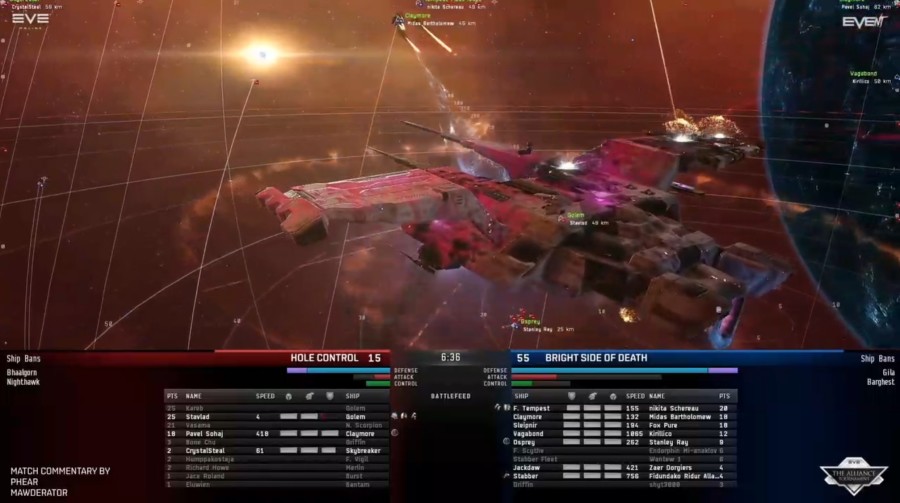 This weekend there will be two more days of digital space pugilism over on CCP TV starting at 15:00 UTC on Saturday and resuming at 16:40 UTC on Sunday. Tune in for all the explosions as the Trials conclude and find out which teams will be carrying on!

We've given a few shout-outs to EVE Pandora and its creator DeT Resprox a few times in the Community Beat but we thought this latest campaign made it worth mentioning again.

A new campaign called On the Offensive created by Pol Macsliebh has reportedly spurred a significant increase in offensive activity by Tribal Liberation Force pilots and has led to a sharp rise in the number of faction warfare systems held by the Minmatar in the last week.

EVE Pandora allows players to create their own unique campaigns and set objectives for other players to perform as well as offer rewards for completing tasks - essentially you can become a mission agent!

Hail to the King

If game music videos are your jam then you'll probably dig this one edited by capsuleer Swagger Olacar which mashes up some vision from EVE Online's most iconic trailers with the song Hail to the King by Avenged Sevenfold. 🤘

Get hype - EVE Vegas 2022 is only 2 weeks away! Grab your ticket from Eventbrite for what will be the biggest player-run EVE gathering this year! Travelling all the way from Iceland to meet and chat with players at the event will be CCP Swift, CCP Spider, and CCP Antiquarian.

Last but not least, EVE Vienna is also just around the corner taking place on October 15. Tickets are free but if you plan to attend you should register so the organizers can keep track of numbers.