It’s been a while since we released a dev blog on the New Eden price indices and the things that affect them. The last dev blog on the subject discussed the effect of the changes in loot drops, the Burn Jita event and Hulkageddon. These had a major impact on the supply and price of minerals and ice.

The focus of this blog stays on the price of minerals and ice. We will look at the effect of the fundamental changes to mining barges and exhumers, which were deployed in Inferno 1.2 on August 8. The smaller mining barges and exhumers were given specialized roles, instead of being inferior versions of the bigger ships. The Procurer and the Skiff now have superior defenses, while the Retriever and the Mackinaw have the largest ore holds. The Covetor and the Hulk still have the best mining yield, even though the other were given yield bonuses to compensate for fewer mining hardpoints.

We’ll start by looking at the effect on manufacturing. The following graph shows the number of each type of mining barge produced since the end of 2005. The reason for showing the series so far back into antiquity, is to emphasize how little this series tends to change. 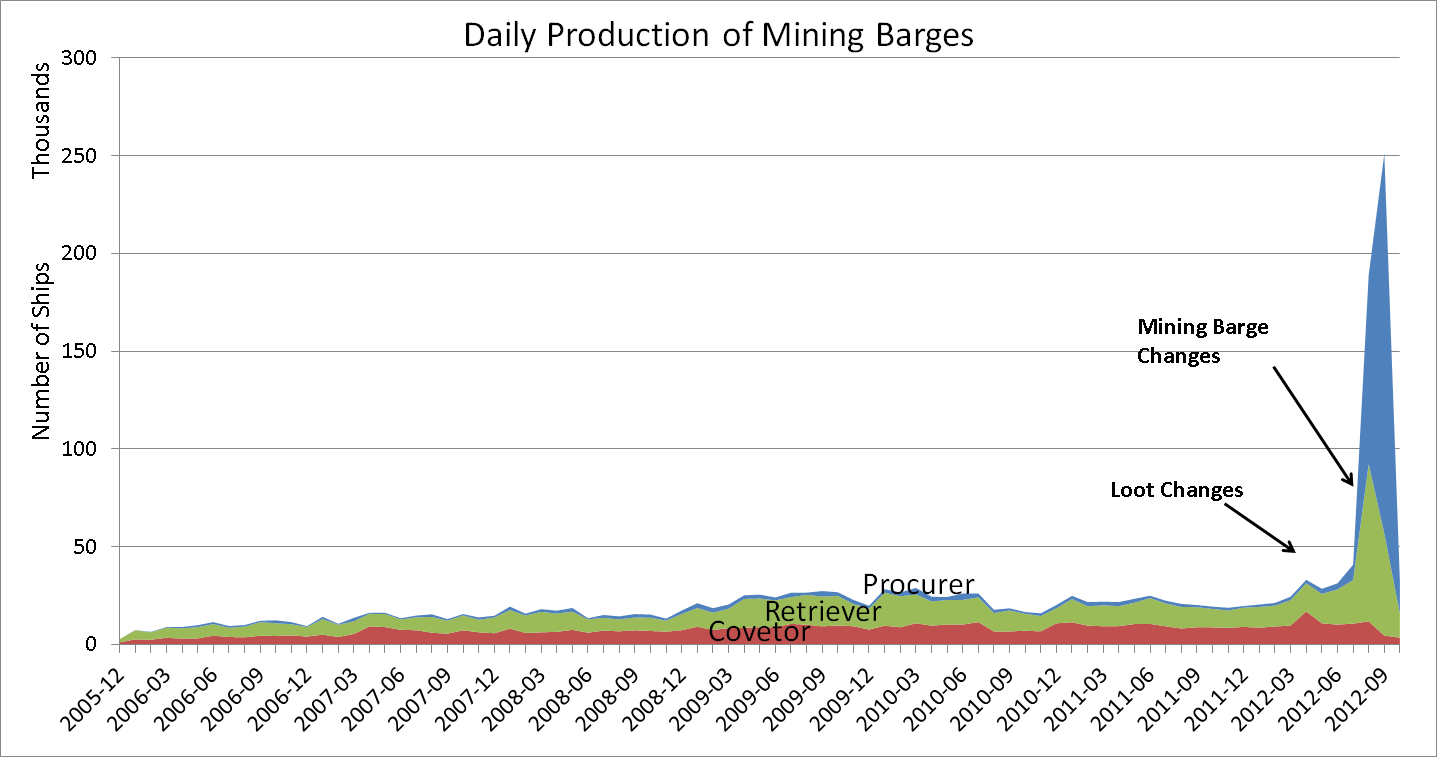 There was a mini-spike in April, this year, when loot drops were changed, which increased the importance of mining. The mining barge changes, however, caused a gigantic spike in the production of the smaller vessels. The average monthly number of Retrievers produced in the first half of the year was 13,600 ships. Production in August and September exceeded that figure by 492% and 284% respectively. Manufacturing figures for the Procurer are even more dramatic, as its average monthly figure of nearly 2,000 ships was exceeded by 4781% in August and by 9706% in September. On the other hand, Covetor production was stable in August but fell by 58% in September.

Manufacturing of exhumers shows a similar pattern, albeit at a much smaller scale. 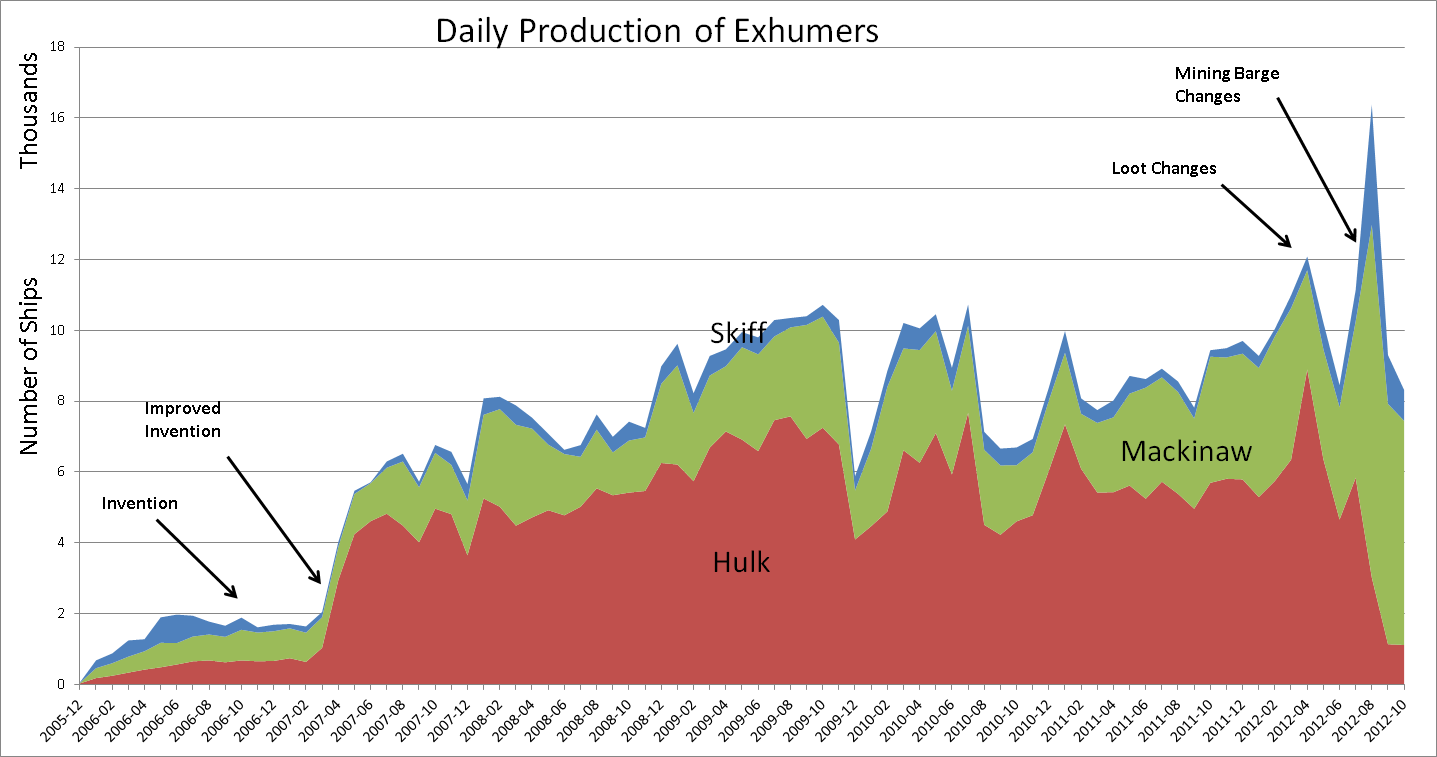 Mackinaw production in August and September rose by 183% and 93% respectively, while the Skiff figures for the same months are 659% and 208% above the monthly average. The drop in Hulk production is 51% and 82% for these months.

October figures show the spike dying down. Retriever production is back where it was before the changes, while production of Procurers, Skiffs and Mackinaws is falling, but still quite high. However, the drop in the figures for Covetors and Hulks is probably permanent and hasn’t been this low since 2006/2007.

The effect on manufacturing is clear, but what effect did the changes have on the use of these ships? The following graphs shows how often players make mining barges and exhumers their active ship in addition to the number that log in with those ships active. This doesn’t show how long they stay active, but it’s probably useable as an indicator of changing use. 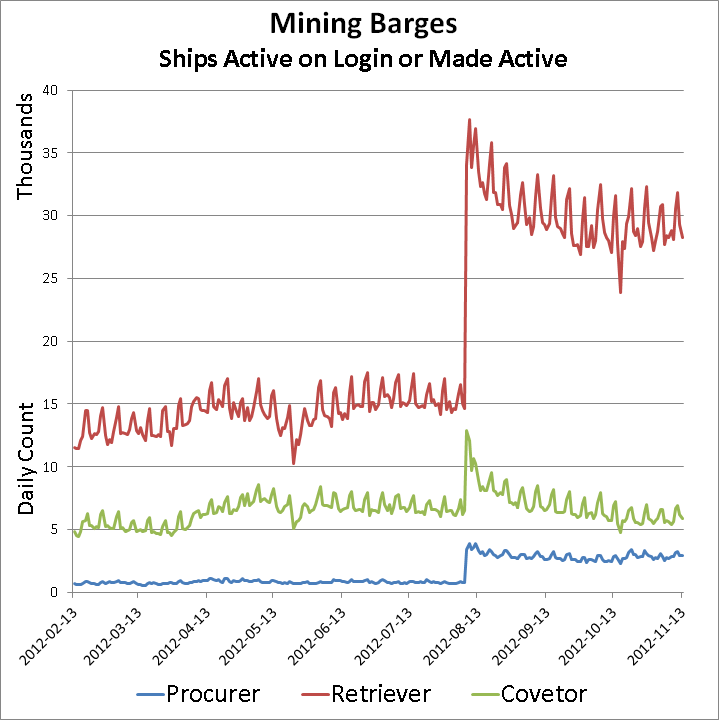 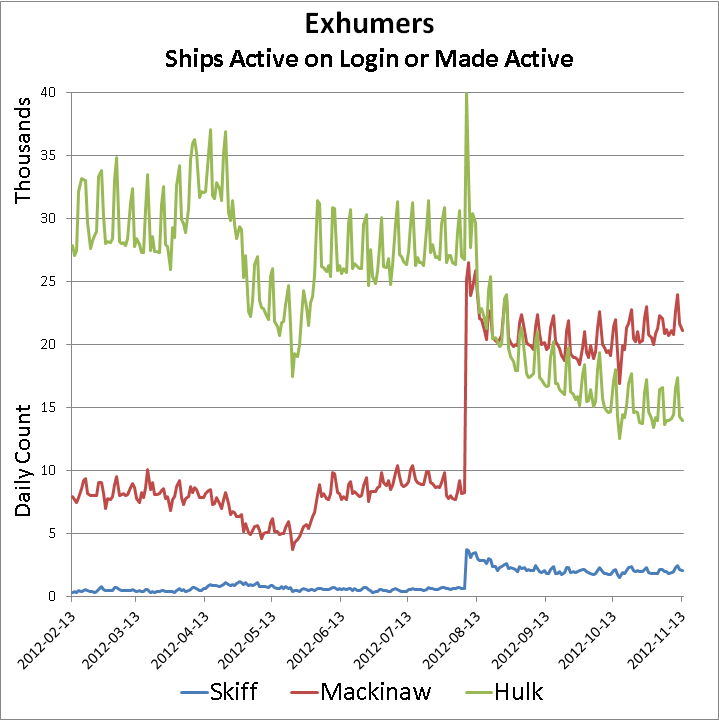 Counting all barges and exhumers in one series, we get the following graph. 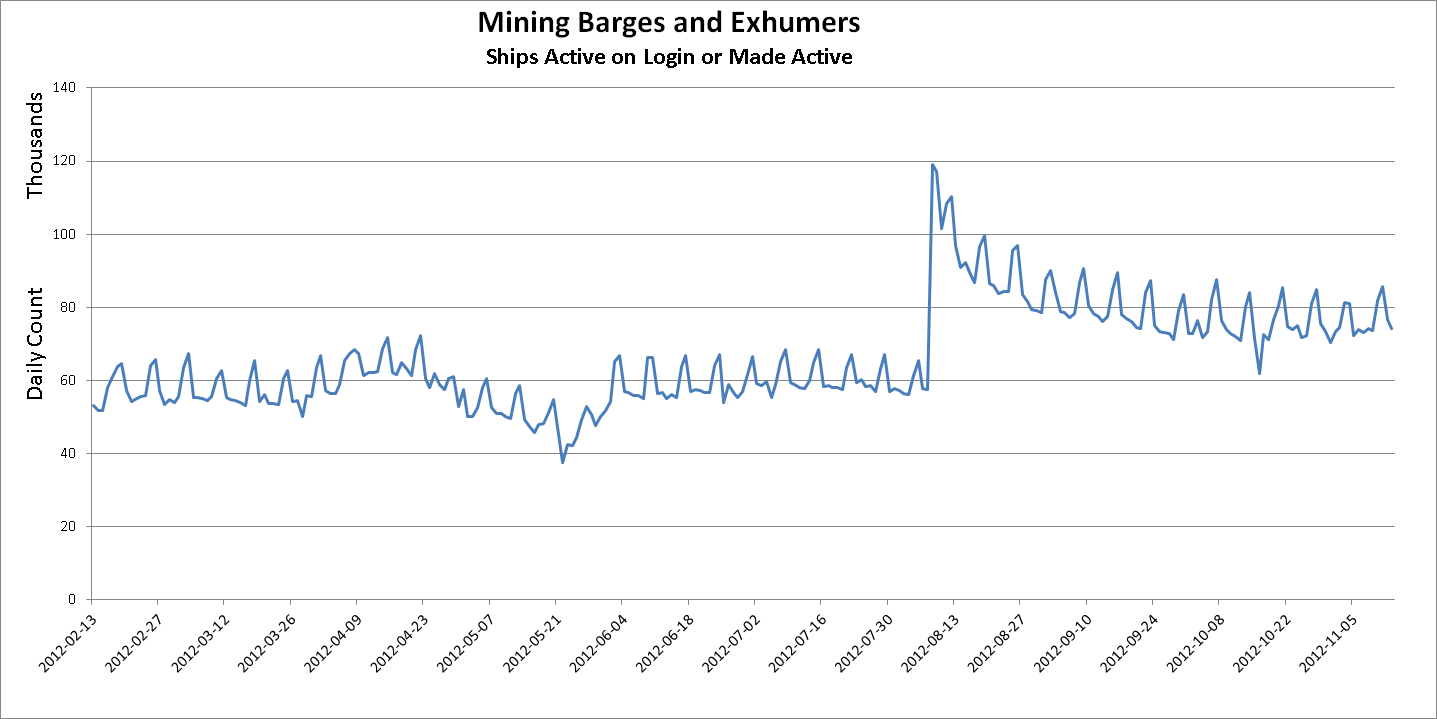 This suggests that overall use of these ships has increased substantially following the changes. Another way to look at it is through mined volume, as shown below. 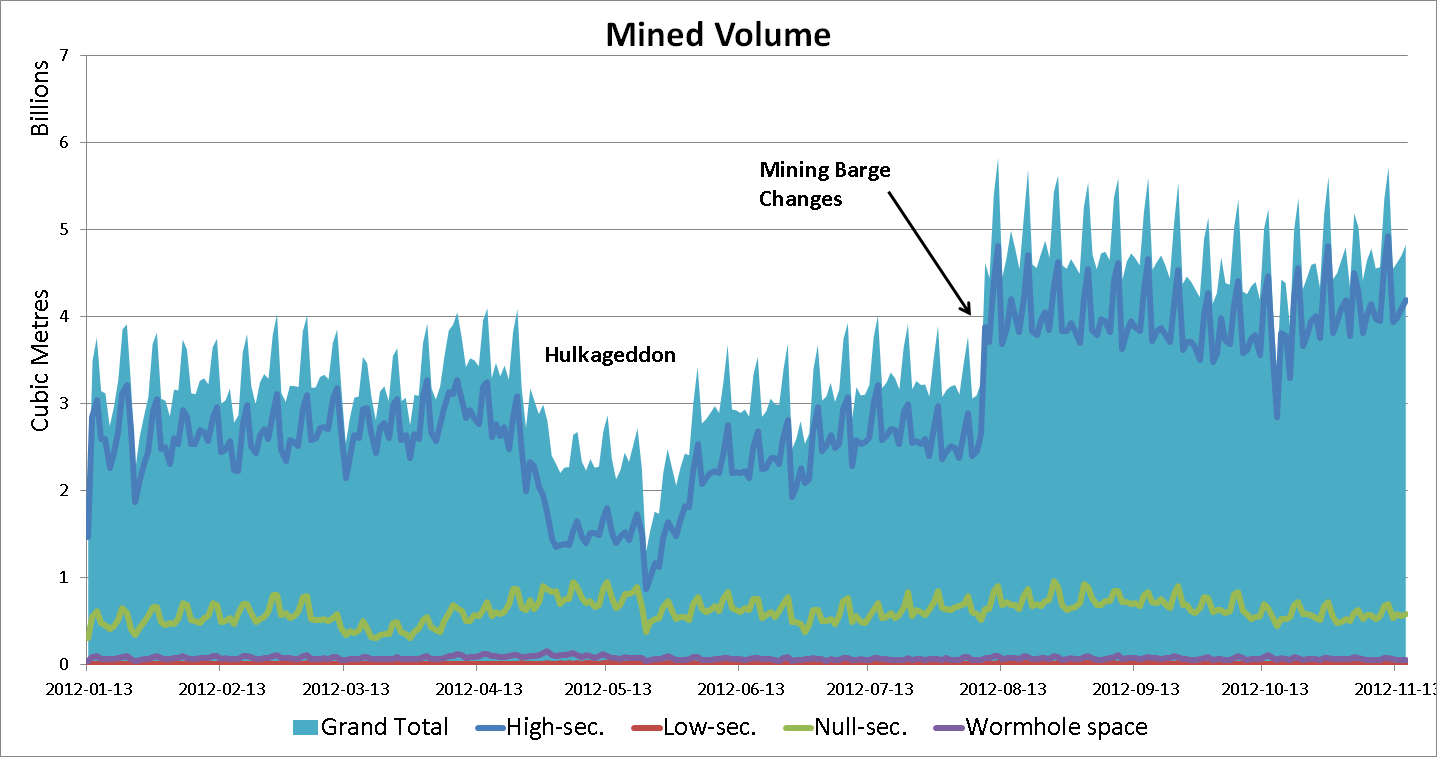 The mining ship changes have led to a very large increase in mined volume. The new versions of the ships clearly provide useful mining alternatives to pilots willing to trade off some mining output for a reduced risk of suicide ganks or less workload shoveling ore to a jet can. Of course, the last part means greater opportunities for AFK-mining. That, in turn, probably explains why the Retriever has become the most commonly used mining ship, and also why the increase in mining activity is focused on high-security space.

What effect did this increase in mining activity have on the price of minerals and ice? The most notable mineral price changes in August were a 25% drop in Morphite prices and a 16% fall in Nocxium prices, while September and October changes in mineral prices were quite limited. However, the price indices for ice and ice products dropped by 33%, both in August and September, before stabilizing in October. 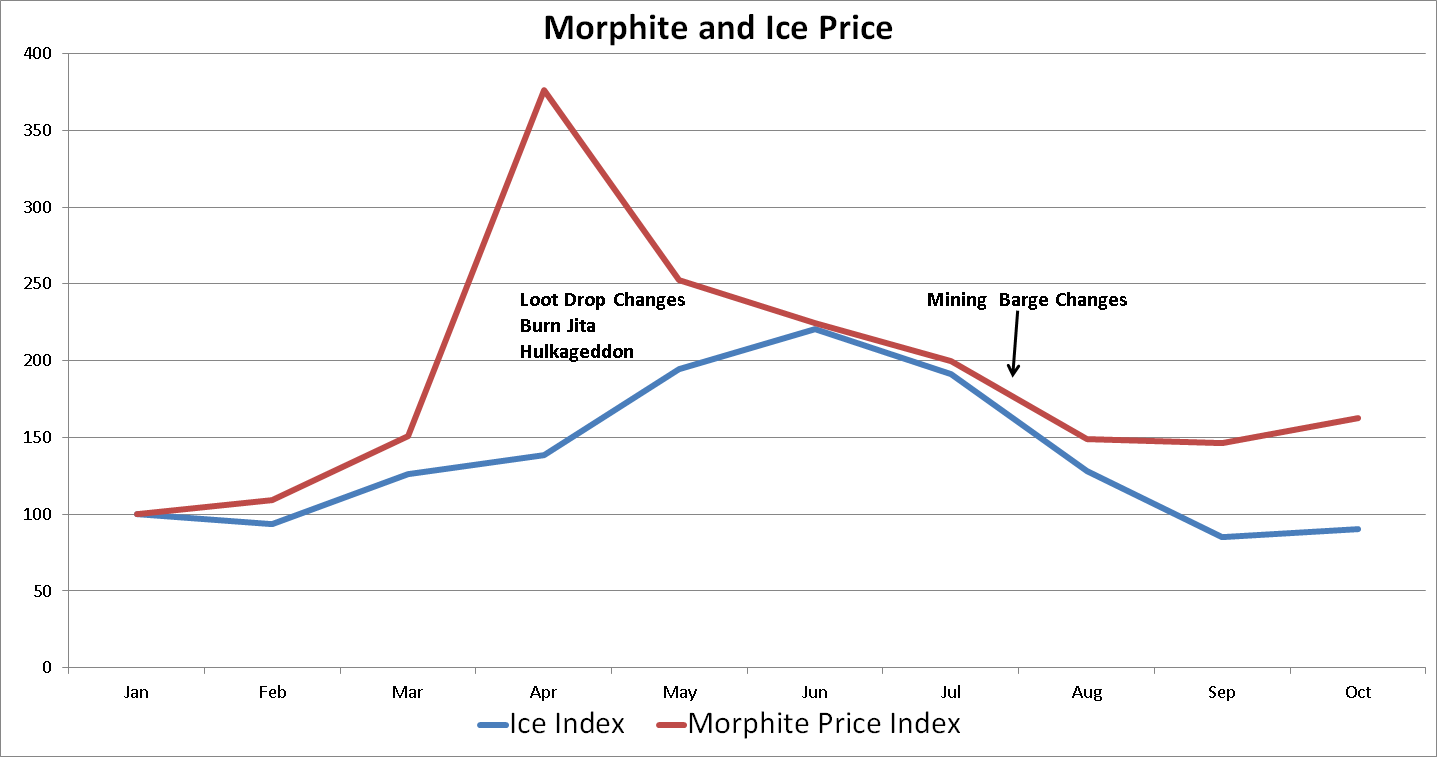 What makes the actual effect rather hard to measure is that this happens shortly after the loot changes, the burning of Jita and Hulkageddon, which significantly disrupted the supply of ore and ice. This makes it hard to tell whether a decline in price is the result of the increased mining activity or just a recovery from the price hike caused by the preceding supply disruption.

The index values for October are:

As previously mentioned, mineral price changes in October were quite limited, mostly cancelling each other out, resulting in a total change of 0.9%. The 3% deflation in the Primary Producer Price Index was mainly driven by moon materials and datacores. Datacores are still falling after Factional Warfare pilots became their primary suppliers. However, the drop in moon material prices would be a case for a wholly separate and risky study, including cartel dynamics and rumours thereof. The 2% deflation in the Secondary Producer Price Index was primarily driven by falling prices of Tech II construction components (caused by lower moon material prices), and from salvaged materials, which fell by less than 7% but weigh very heavily in the index. Finally, the 2% inflation in consumer prices is almost solely driven by PLEX prices, while most other consumer products experienced deflation in October. Without PLEX, the CPI would have shown 1% deflation. 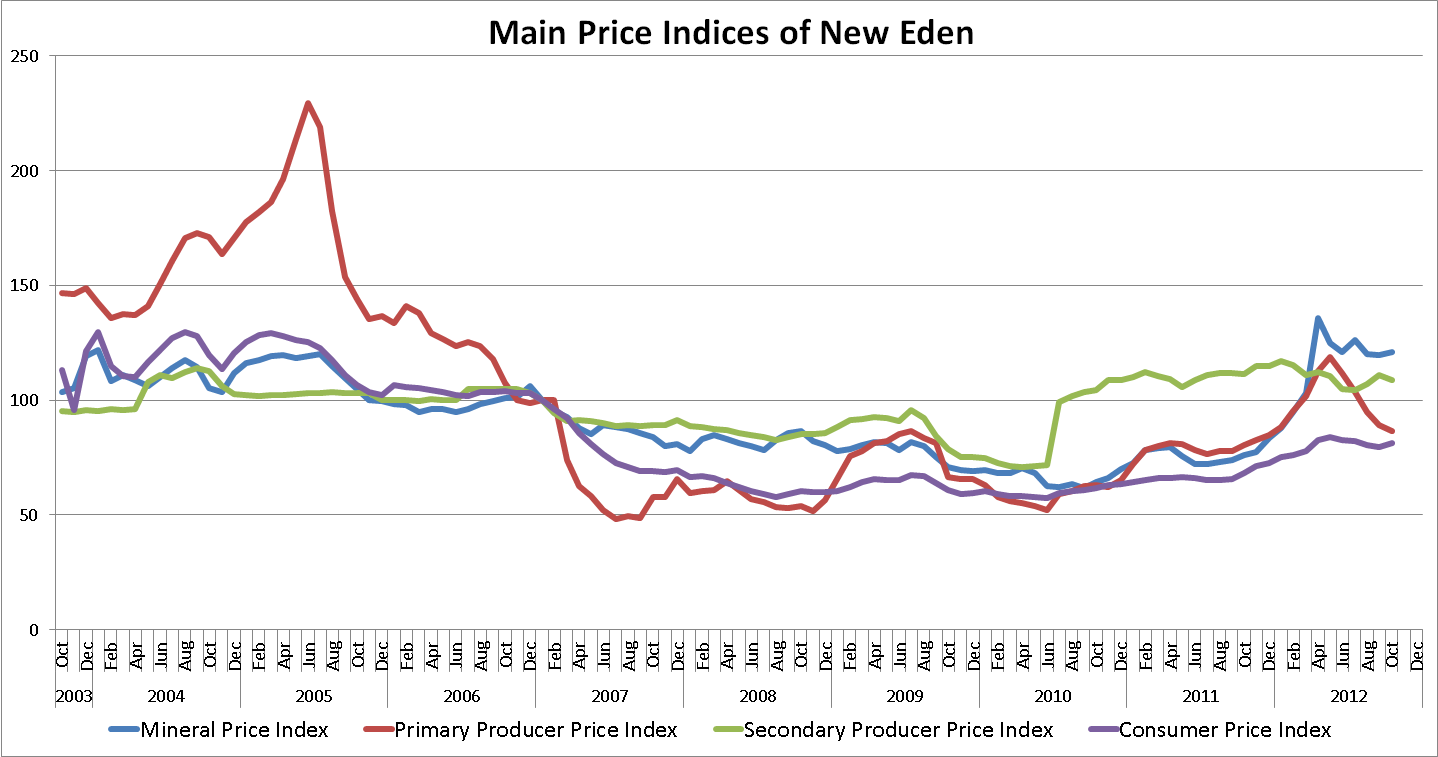 Based on the increased diversity of mining barges used, it would seem safe to assume that the changes to mining barges and exhumers turned out well. The main effect of the changes seems to have taken about 2 months to materialize. The tanked versions of the mining ships probably won’t have a major effect on the next Hulkageddon, since anything flying in high-security space can be suicide-ganked. However, the cost of suicide-ganking Skiffs and Procurers should have increased a little as a result of the changes. Finally, it should prove interesting to see, if the new mining frigate that’s coming in Retribution will affect mining in a significant way.