Building the future of EVE

It’s been a week since we unveiled EVE Evolved which represents CCP's commitment to continually invest in the foundations of EVE Online, and we wanted to share with you how CCP are continuing the journey of setting EVE up for its third decade. With a renewed focus on the foundational technology that EVE is built upon, our mission is to bring cutting-edge visual and technical capabilities to the EVE Universe. Through this, we can achieve our goal of visceral supremacy, remaining committed to making EVE the most beautiful, immersive sci-fi game ever made.

In this dev blog, we will be walking through some of the foundational improvements from the June release. You’ll be getting a deeper insight into what’s changed, what’s coming, and how these updates will enhance your EVE experience in the future.

DirectX 12 and Level of Detail 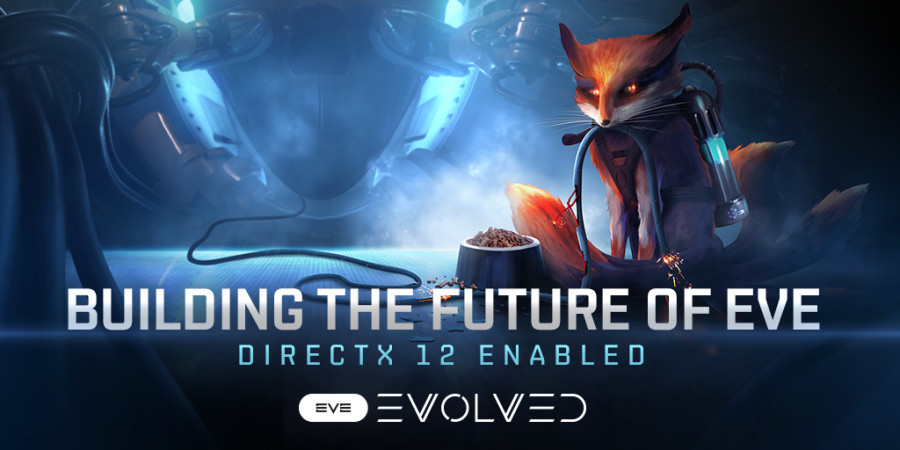 As part of our continuous investments into EVE’s future, we have been hard at work to bring DirectX 12 to EVE in the June release. DirectX 12 will serve as the new foundation for rendering the game on Windows, allowing better utilization of graphics cards, reducing power consumption, and bringing better game performance on supported hardware.

While performance is important, releasing a DirectX 12 capable version of the client allows more modern graphical features to be utilized. It lays a better foundation for EVE so that we could bring even more amazing visuals to all pilots in EVE such as the hangar visual updates that are coming this fall. DX12 also opens the door to even more graphical upgrades in the future such as DirectX Raytracing, which will allow us to implement the next level of visual fidelity and provide an even richer, more immersive experience for all players.

Alongside DirectX 12, we have overhauled how the game calculates the Level of Detail and fidelity for ship meshes, textures, and other objects when they are rendered at different distances from the players’ camera. This improvement will allow our artists to upgrade assets from our previous three levels to as many levels as they desire. It allows assets to smoothly transition from foreground to background, attaining the best balance of performance and fidelity.

These LOD changes are designed to scale based on system hardware and settings to ensure the smoothest possible experience for players.

Along with this, you will also see an improvement in how the in-game camera calculates what it should render, ensuring that objects out of view are not taking up unnecessary system resources. This improvement will lead to better client performance, especially in busy scenes.

As part of our commitment to providing a more immersive game experience, the career agent mission sites have been given a complete overhaul so that the visual experience in those sites is more in line with the new player experience which has been under constant iteration since its debut in 2021. The placement and appearance of interactable assets in those mission sites have been updated, as well as those in the background. You will also see several structures, effects, and objects that are never-before-seen in those mission sites.

One notable inclusion in the revamp of those missions is new decorative asteroid models. They were generated using a novel art pipeline leveraging modern asset creation tools to help improve the overall sense of dynamism in these assets. We’re looking to expand upon this to include additional variations and shader changes in future releases as we continue to evolve New Eden's living universe. 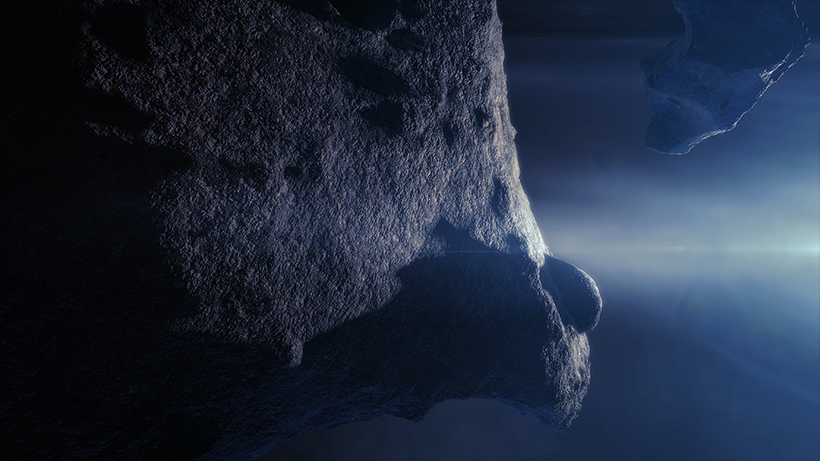 The resolution of every nebula background in-game has been doubled, quadrupling the pixel count and increasing both the level of detail and quality of the starscape. The increased resolution of the cubemap also gave us the opportunity to remove unintended seam errors. In addition, the colors of each nebula have been rebalanced to further enhance and modernize your experience in space. 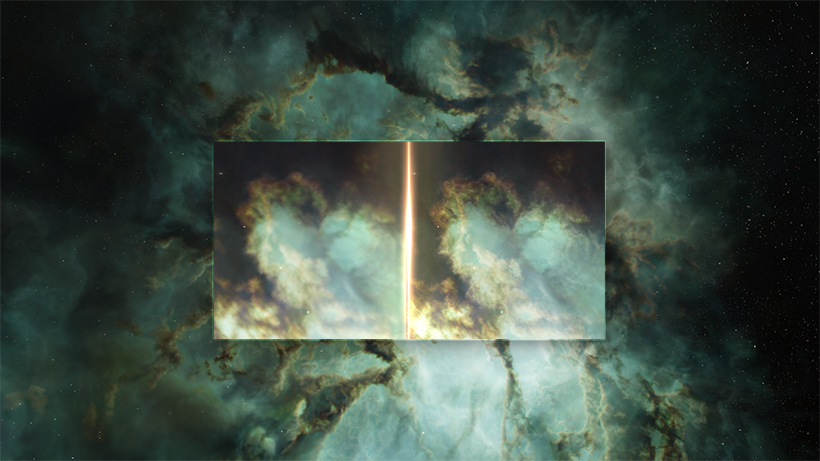 Sightseeing in New Eden has now become more immersive than ever before!

Speaking of sightseeing, how can we miss the reintroduced cloud cover effects? Previously deactivated due to quality and performance concerns at the time, these cloud effects have been brought back in the June release, with improved appearance and better utilization of our latest tech. 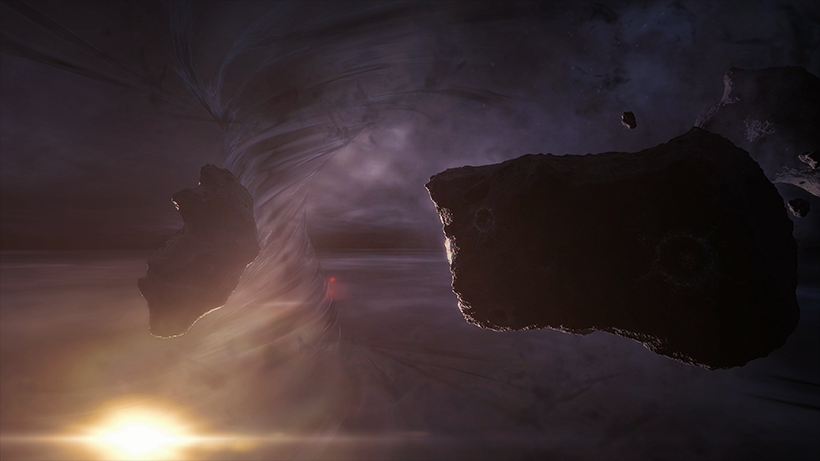 These vast cloud formations have now returned to fill our skies with swirling gas funnels, raging stellar storms, and claustrophobic elemental vapor. You will now be able to see these effects throughout sites across New Eden, so keep an eye out for space weather in a system near you!

Significant updates have been rolled out in the June release that improve all textures in the game.

In days of yore, developers needed to be very mindful of memory usage and hardware limitations. A common technique was to save space by using fewer color channels from the textures and packing them together in a single, multi-channel texture. This would save space and reduce the data being sent to the GPU. However, doing this has an effect on the quality of the visuals such as blocky artifacts in the normal maps that are highly visible in specular highlights.

These errors were acceptable at the time because of the benefit to memory and processing power, but the technique has become less frequently used as hardware has become more capable. In EVE, texture packing has been removed altogether to ensure these artifacts will no longer appear while also giving a cleaner visual for every asset in game.

Using unpacked textures also gives us more fine-tuned control when compressing each texture, as we’ve now selected a compression type that is best suited for each of the map types. This has allowed us to improve the overall detail of the in-game assets.

In short, these upgrades will ensure that ships and stations now look the way our artists envisioned them with no lost details or unexpected rendering artifacts. And the more power we can give to our amazing artists, the more beautiful EVE can become in its third decade!

On our path towards modernizing the EVE experience, Compact Mode has been introduced in June as we continue to iterate and improve Photon UI. You can now enable this mode for select windows such as the Overview, Chat, D-scan and more. With Compact Mode, you will see an improved experience with the UI that is more consistent and easier to grasp – sometimes great things do come in small packages! 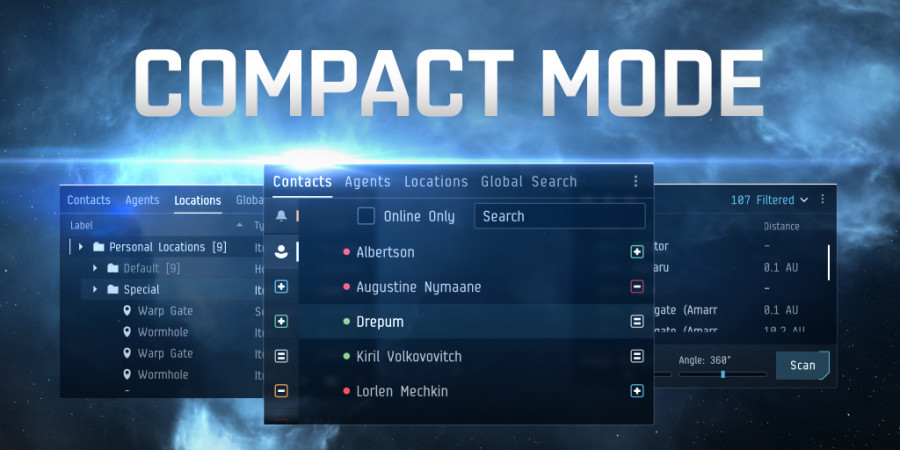 We’re continually iterating and improving this feature, and we will be sharing more details on that in a dev blog later this summer.

Building an enhanced sensory experience that you can get lost in needs more than just graphical improvements. In service of that, we’ve taken player feedback onboard and further improved the audio experience by allowing you to hear the propulsion modules of those around you. Along with this, the diversity of engine sounds has been expanded to give a more unique auditory experience for a wider range of ship sizes. Because after all, flying a Nidhoggur shouldn’t sound or feel the same as flying a Rifter. This improvement focuses on giving you an enhanced and more balanced sound experience in space.

In addition to that, sound effects for career agent missions and other cloud covered sites have also seen an update as we continue to create a much more immersive audio experience for players.

Speaking of audio enhancement, we’re currently working on how the client handles audio in heavy scenes. The new audio prioritization system will ensure that scenes with a high number of audio objects such as fleet fights will have improved performance while also ensuring a clear and concise audio experience. Sounds at closer distances will be prioritized, and the number of audio events will be scaled based on machine performance to ensure a smoother audio experience for players. We’ll have more to share on this by early fall, so stay tuned!

In order to keep EVE healthy, we know that it's important to address any defects or bugs as quickly as possible. In service of this, we have been continuing the work to improve our tooling and have added improved debugging tools with Honeycomb, helping us find and squash bugs faster than ever before. With this improvement, we are now able to see the root causes of an issue more quickly. In addition, we can utilize distributed tracing to more easily identify opportunities for making EVE faster by finding performance bottlenecks.

In the spirit of making EVE faster, we are also actively working on replacing some of the critical infrastructure under the hood, so that in future you will see EVE features become more responsive. But more on this at a later date.

That about sums things up for now but stay tuned for blogs and streams on topics such as UI to audio as well as game updates in the weeks and months to come, as EVE continues to evolve into the next decade and beyond!