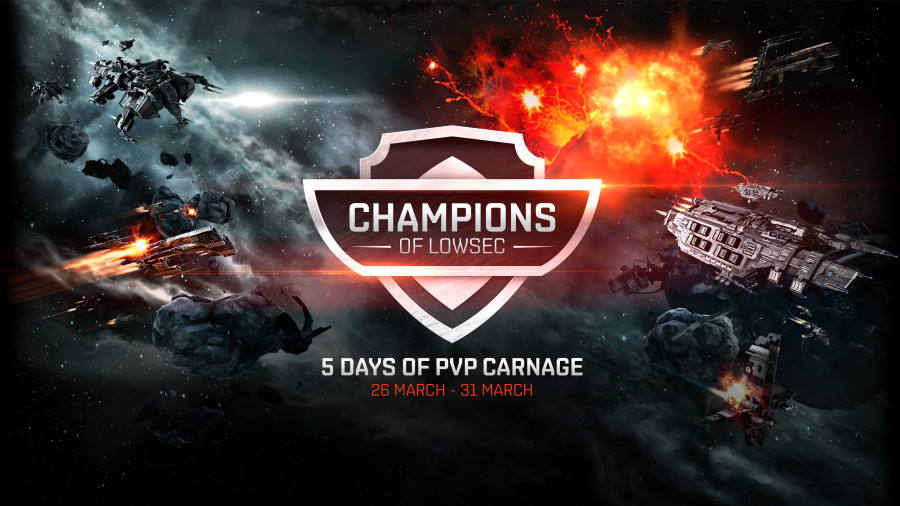 If you would like to discuss this event please head over to the thread on the official forums!

Back in 2013, EVE Online hosted the Kings of Lowsec contest - a 24-hour killing spree that saw a tie for the coveted crown between Pandemic Legion and Urine Alliance (the precursor alliance to Snuffed Out). But now, some seven years later, it’s time to once again determine who the ultimate predators in the bleak lands of low security space are.

Champions of Lowsec will extend the contest into a 5-day carnival of carnage! The alliance or independent corporation that destroys the greatest ISK value of ships in low security space during the contest period will be named the Champions of Lowsec, and their flag will be displayed in CCP’s new HQ for a month to celebrate their unquenchable thirst for destruction.

Additionally, with a keen interest in lowsec space, Mordu's Legion is promoting these capsuleer combat trials across New Eden's lowsec systems. After the event concludes they will be awarding medals to the members of the winning alliance or independent corporation who have appeared on killmails in lowsec during the contest period. The medals awarded by the Legion will be added directly to the character sheets of the winning members.

Along with all that comes the bragging rights of being able to claim that they are an unstoppable force in some of the most dangerous space that New Eden has to offer, and so a special tribute video to the winners will be created and displayed on all in-station billboards across New Eden for a period of one month. Nobody in New Eden will be left with any doubts as to who the true Champions of Lowsec are.

This contest will run from 26 - 31 March 2020. At the conclusion of the event, all PvP kills that took place in lowsec that meet the criteria below will be tallied up to determine the ultimate winner!

With all the fantastic changes coming in the Loyalty to Lowsec update and now Champions of Lowsec as well, there's never been a better time to get out into low security space and shoot some people in the face!

So gather your best pilots, ships and fits, and strike out into lowsec space to determine who will become the undisputed Champions of Lowsec!