All These Worlds: The Return of Live Events 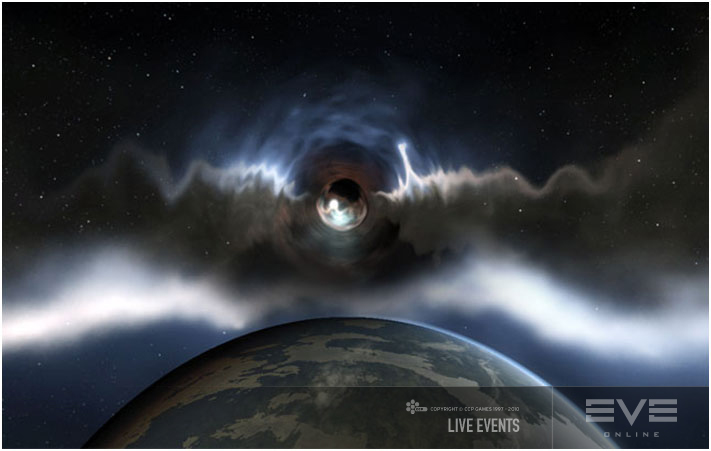 In the spirit of all of the other fundamental changes about to take place in the Tyrannis expansion, players will also be able to participate in the return of Live Events. They have, in fact, already begun.

Although only a tentative first step at this time, we hope this experiment ("and others like it," CCP Dropbear wanted me to add) will pave the way for a new generation of interactive storylines.

For this first run of events these encounters will take place both in-game across all sectors of space and through other out-of-game mediums, the latter of which is the part of this already in motion, if you know where to look (hint: news, forums and, oh...why not...other places you may not expect).

All in-game events will be personally run by EVE Online developers and, for the immediate future, every other facet of event production will be handled in-house too.

The Atlanta Content team, in conjunction with a variety of other departments, has been working hard on a new story involving one of New Eden's oldest and most insidious threats, and with the advent of these events, one that will become increasingly real.

The purpose of these events is multi-faceted. For one, we want to elaborate on an entirely new plot line, and one with far-reaching implications.  Another objective is to reach out and grab players who may not otherwise be aware of EVE's rich storyline, and of course, to breathe some more life into that world.

Perhaps most importantly though, we want to begin taking our first new steps since AURORA towards creating truly interactive storylines; that is, storylines that players can influence and shape - have an impact upon. This is no small feat for a game as uniquely "shared" as EVE; when participation in a single event can theoretically scale upwards into the thousands, and the "roleplayers" and "non-roleplayers" (if you believe in such a dichotomy) are all playing on the same single server.

These design issues and others are some of the things we want to try and tackle as we experiment with this first run. Feedback from you players is going to help shape current and future events, so please share your opinions and suggestions as things unfold.

Lastly, here are a few ground rules we'll be using to conduct events:

That's the brief overview of what's to come. As the events begin to unfold we'll likely return here to speak a little more candidly about what is in store, but for the meantime...

When you discover an event taking place, think about spreading the word and even checking it out yourself.  You never know what's going to happen...