ART BLOG – Improvement of textures, and a new Scorpion model

Well then, first blog, so where to start? ...Oh yes, we're changing the Scorpion: 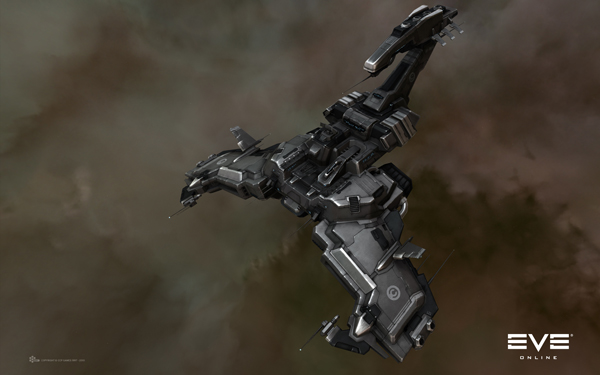 Trinity was an awesome expansion, which brought with it what was then called Premium content - the shiny new graphics with updated ship models and textures. Since then support for the classic client has ended and the "Premium" graphics has become the standard, with reduced settings for older graphics cards that can't handle all the shiny goodness.

Most of the art in EVE weathered the change over to the improved graphics quite well, but there are those pieces that we were never quite happy with. The new textures were also less forgiving on blemishes and flaws that previously looked like an interesting design element if left up to the imagination, now became a glaring eyesore begging to be fixed. Well, to artists anyway.

This was the case with the renovated Scorpion. What worked before, didn't really work anymore, so the art director felt that he'd want to see the ship redesigned, in the new style for Caldari introduced by the Tech 3 ships during Apocrypha. He also felt that the current design lacked the feeling of weight that a battleship needed, that it felt rather flimsy. So the goal was to make a beefier, more aggressive-looking
Scorpion. And a chance to redesign and possibly improve on one of the most iconic ships in the EVE universe was not something I was going to pass up.

Since improvements are the order of the day, and this brings me to the title of this blog, one of my other tasks during the first Sprint of our Summer 2010 release was research into the way we pack our textures into the combined dds file types used in the client. For anyone not interested in graphics, this will likely be dry reading, but you might find it informative if you have no idea how game graphics work.

The tl:dr version though: Made stuff look better.
Pics or it didn't happen: See below.

During Apocrypha we introduced new shaders on the Tech 3 ships that allowed us to manipulate the color of the reflections of a given material. These shaders were also of a triple-material variety, which we hadn't done before. The triple-shader type required an additional mask map to denote where the 3rd material would show up on a ship, and the addition of this new map meant that the current packing convention was not going to be very efficient. Below you will find details listing the gains of changing from the current system, called the NGS file system, to the PGS file system. It does get rather technical, so there are pictures to help :). 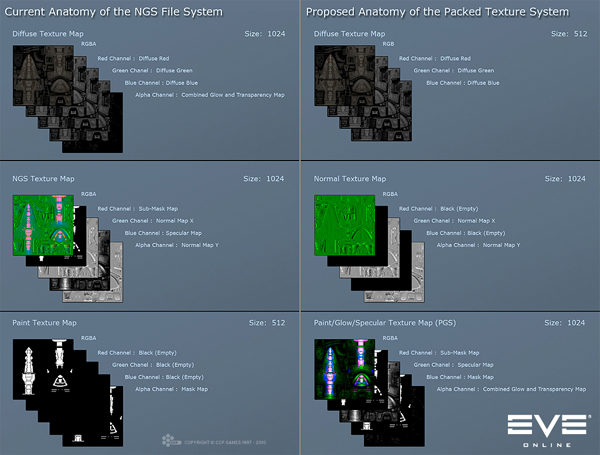 The major benefit to the triple-shaders is that we can use a single shader to denote material types on a model, rather than cutting up the geometry into different areas with multiple simpler shader types. Having geometry defining area breaks is not as precise as using a texture to do it, it doesn't look as good was with a texture as the definition line is VERY clear and often doesn't match the texture being placed on top of it , and of course the Art Department likes to control as much as we can. :)

The second big benefit of the triple-shaders is that we can more easily create factional variants of assets.
Now the problem with the NGS system is that it doesn't play as well as we would like with the triple-shaders with regards to number of packed texture files. With the addition of the sub-mask, we have run out of channels to pack it into (as current double and single shaders only use 2 packed textures - a Diffuse, and a NGS texture), thus a new _P (paint) texture map was created to store the extra data.

To make factional variants of assets we would like to change the "paint-job" in some instances, and not just change the colors in the shader settings(Which often leads to a "washed"-look that the art director isn't very fond of. The way the NGS textures are packed would mean we would have to generate a new NGS and P texture of every factional variant. If we repack textures in the PGS way, we would only need to generate a new P texture for every factional variant, thus reducing client size, as we'll be reducing the number of textures needed. You'll notice that the different files and their sizes change, but in the end we end up with two 1024x1024 textures and one 512x512 texture, so the PGS system should be very similar in per-file size. As an example, the texture sizes on the example ship below are:

The third benefit, and the cherry-on-top, is that the PGS system also gives us an improvement in quality of the textures over that of the NGS system. Below you will find screenshots of the new scorpion using both NGS and the PGS textures and you can see the results yourself. 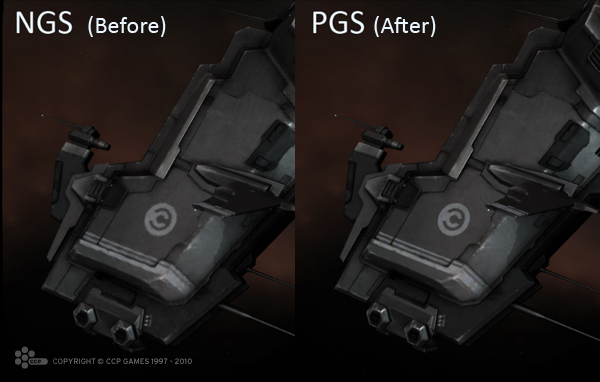 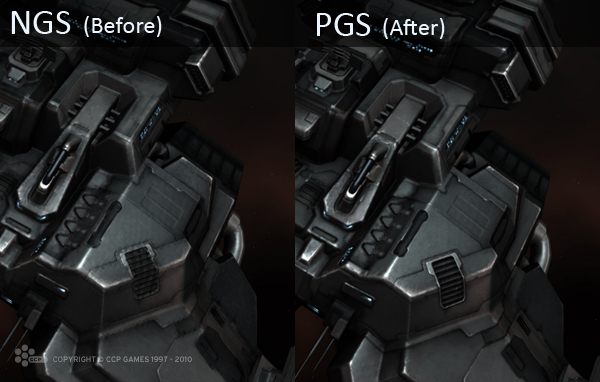 And yes, this does mean that we will have to update every ship in the game, but it is a process that will be done over multiple expansions, starting with the Summer 2010 expansion.

And since this is an Art blog, I'll leave you with a shot of the Scorpion dressed in the various Caldari factional colors. Not all of these variations will be included in the Summer 2010 expansion, as there is still much work to be done regarding the different factions of the four major races in EVE. But previews are always nice.  :) 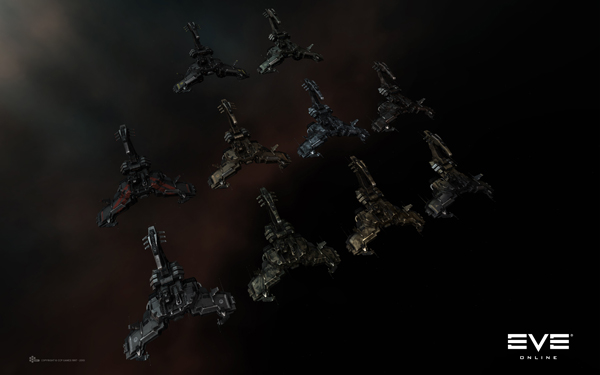