The time of Incursion approaches as the shadow of the Sansha's Nation reaches across EVE Online.  Incursion is bringing a great bag of awesome and it's time to mention some of the icing on cake changes coming as well, which will interest many of you covering some timely welcome additions and balancing.

Tech II ammo getting some love

Tech II ammo is getting some love in the coming expansion.  We are focusing on the short range versions of the Tech II ammo such as Gleam, Conflagration, Hail, Quake, Void and Javelin.  We are removing various negative effects from each, focusing on the drawbacks which penalize your ship itself and also stack per hardpoint loaded with the ammo.   This means the ammo will be a good alternative to the faction ammo and, without such focused and sometimes crippling drawbacks, will be much more useful.

Rockets have been given a power up with a focus on making them more effective against frigate sized ships.  They gain a bonus to explosion velocity and damage whilst getting a slightly reduced rate of fire.  In addition, the Hawk received some special attention with a change to its kinetic missile damage bonus to 10% per level and a little extra powergrid.

SCC approves addition of faction ships to the market

The SCC has been persuaded to relax their stringent hold on the market and will, with Incursion, allow the trade of all faction ships.  This is pretty cool for those of you looking for pimp rides to show off whilst cruising around Yulai with more bling bling.

Fighter Bombers no longer give the server a migraine

Fighter bombers and supercarriers have shot up in popularity since Dominion where they got a boost and role change.  The side effect of this is that fighter bombers are the "spawn of evil" in server performance terms. Team Gridlock who are leading the war on lag effort identified them as a major contributor to fleet fight lag as is demonstrated below.  Not only are they drones which usually come in packs of 20 per ship but they fire missiles which all have to be tracked in the inventory and physical scene within the game.

To alleviate this, we are switching fighter bombers to use "fake missiles".  In doing so, we dramatically decrease the load induced by utilising fighter bombers.  At the same time, the visual effect of the bombers attacking targets is now much more awesome whilst at the same time no longer causing as much load courtesy of our art and audio team.

Below you can see the server load graphs of 30 supercarriers deploying their drones (the first CPU spike) and then ordering their drones to attack a target for about four minutes (the second event) so we can establish the average load and then finally recalling their drones. Graph A shows fighter bombers as they are today as you can see consuming the lion's share of the server CPU.  Graph B shows the same fighter bombers now modified to use fake missiles in the same scenario and that the CPU used is now much lower.  Graph C for comparison shows supercarriers with fighters as they are today (fighters cause more load because they fire more frequently)

A) 30 Supercarriers with 20 fighter bombers each  (current situation) 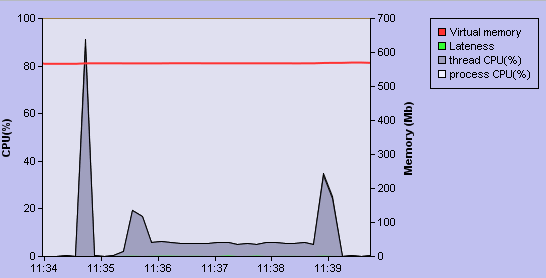 C) For comparison - 30 Supercarriers with 20 fighters each (current situation) 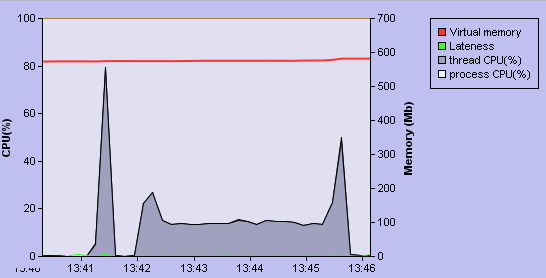 This does mean their damage output now varies like a turret does rather than be constant like old missiles (they can wreck or lightly hit now for example). The damage is comparable but we have been more stringent on bombers being more focused on being a threat to capital ships rather than melting regular sub-capital ship classes. Fighter Bombers will be much less effective against sub-capital class ships now and in this scenario you should switch to using fighters.

A thread for feedback on the specific changes to Tech II ammo will be appearing in the Test Server Feedback channel in the near future and all constructive feedback is welcome as ever.  There is already a thread for rockets there which we are closely monitoring.