I’m CCP Affinity from Team Five 0 and it’s time for another PvE update!

In 2011, CCP Bettik decided to make it his personal mission to fill in the gaps in deadspace content.  In Crucible 1.5, released on 13th March 2012, he added 3 more deadspace sites, bringing us to a point where we now have all 1/10 to 10/10 pirate deadspace sites in game, bringing this project close to completion.  There is a lot of money to be made from Deadspace loot and through this project we’ve introduced a number of previously unavailable modules for you to use or sell.

Incursions have been a hot topic on the forums, so Team Five 0 decided to see what we could do to shake things up a bit.  After collecting a lot of valuable feedback from you guys, we decided to give the spawns more variety, without significantly altering the difficulty of any one spawn.  This was done by grouping the NPCs into waves, and moving the trigger to spawn the next wave from an individual NPC to the group as a whole. This will mean that you now need to kill the whole wave to trigger the next one, rather than just specific NPCs.

As well as adjusting these triggers, we’ve also randomized the spawns based on feedback that Incursions had become too predictable.  Now, when you enter an Incursion you will no longer be able to predict every spawn.  Feedback and our internal statistics also confirmed that Vanguard sites had an excessive reward-to-effort-ratio in comparison to other Incursion sites, so we have reduced their reward by 10% to keep them more in line with the compensation expected for this difficulty of site. This should also have the fortunate side-effect of increasing the length of Incursions in high security space.

We‘ve recently spent a lot of time looking at Rogue Drones, and ultimately decided to add bounties to their heads.  To keep things balanced, the drones will stop dropping alloys, but instead they will have sizable bounties for any pilot who dares hunt them down.  The bounties will keep Rogue Drones as a viable target but will also give the nullsec miners some love, making mining in nullsec a dangerous but valuable profession once more. 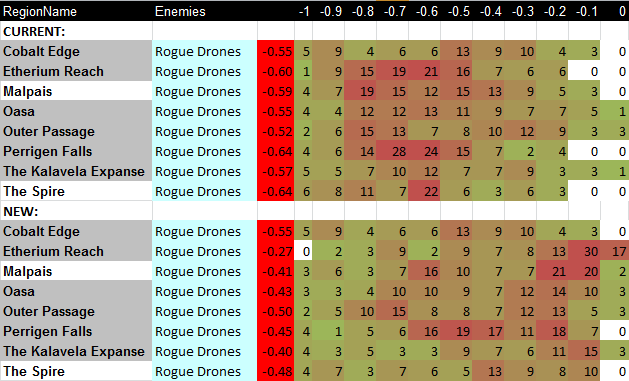 As part of this change, we‘re also adjusting the security status of drone region systems.  As you can see from the image above, the change is an upward adjustment in truesec across most regions, with the ones closer to empire ending up with a higher truesec than the ones further away.  The overall goal of all these changes is to make the drone regions more economically balanced, and to reduce the downward pressure on mineral prices from the drone regions so mining becomes more profitable.

We hope these changes will inject some excitement back into PvE content and make it a more fun filled experience.  These changes will be on Singularity very soon and as always, your feedback is very much appreciated.