The EVE community is an incredibly vibrant collection of clever people and organizations who provide passion, innovation and excitement within the EVE Universe. These amazing Capsuleers have created countless wonderful EVE related projects, events and initiatives throughout the years and thus helped to create a unique EVE Online experience.

Since the beginning of EVE we have  witnessed many contributors engaged in endless hours helping the EVE Community by either setting up events and tools or indirectly by providing an infrastructure for sharing information or letting players efficiently help other players.

Amongst all these contributors, small and big, only few have helped the EVE community with such a beneficent passion, dedication and impact as one person alone: Chribba.

Chribba is a long time member of the EVE Community. His passion for EVE Online began in June 2003. Early community interaction happened mainly on the EVE forums with many fruitful discussions. While organizing numerous in-game projects and massively supporting the EVE Community with out-of-game services and tools for many years now (more about that later), people consider Chribba to be one of the most famous and trusted member of the EVE Community. Chribba is also famous for his Veldspar passion, his dreadnought class mining vessel, the Veldnaught in Amarr, and his Veldfleet, a fleet of capital ships exclusively fitted for mining Veldspar that harbors all nine different supercapital ships.

Building up the EVE Community

Chribba supports the EVE Community with valuable tools and resources since many years now. It is no exaggeration to say that EVE Online would be not the same as we know it today without the many tools provided by him. The main tools for players include EVE-Files, EVE-Search and EVEBoard. He first started supporting the EVE Community because he wanted to help some friends and from there he continued offering more powerful tools to benefit the entire community.

Chribba’s OMG Labs. has published more tools, all of them are an impressively valuable help in empowering the EVE Community. 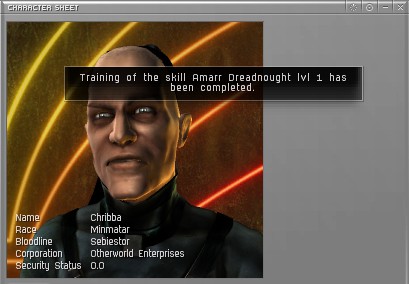 Chribba organized countless events in game of various sizes, the cozy LoveCans and highly praised LoveQuests are just some examples. Chribba was also the focus of various events organized by the community, for example helping him to defend his Veldspar Towers and "Chribbas Cottage UNITY station".

Due to Chribba’s immense popularity, reliability and his generally peaceful approach (unless you contain some Veldspar…), Chribba is among only a few other people in New Eden with impeccable credentials as a trustee, often conducting high value trades between two parties. The total value of these third party trades reached, accordingly to Chribba so far, are in excess of 52 trillion ISK including 3,000 traded supercapitals.

Chribba plans to continue playing EVE Online for quite a long time and he enjoys working towards the goal he has set for himself in-game. Out of game plans include a major update of EVE-Boards that eventually includes a massive amount of non-active pilots, he also works on an Android app. For EVE Online's 10-year anniversary he wants to organize something fun to give back for all the wonderful years he has received so far from EVE Online and its great community.

"Never let anyone else dictate your goals", Chribba